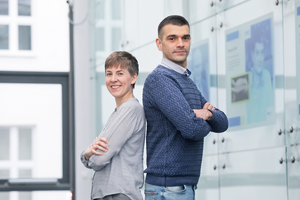 Prof. Katharina Boguslawski and Prof. Piotr Wcisło from the Faculty of Physics, Astronomy and Informatics (Nicolaus Copernicus University, Torun, Poland) have just become awarded with the European ERC (European Research Council) grants, Being awarded with this prestigious distinction results not only in huge research funds but also, and even more significantly, in winning a globally recognized scientific quality mark.

High risk – high gain is the motto of grants offered by the European Research Council (ERC). This independent agenda established in 2007 by the European Council places importance on excellence in research which is the key criterion for the evaluation of proposed scientific ideas.

ERC offers grants to scientists working all over the world, being at  all stages of their careers, and wishing to realize their research projects in the European Union. The universal classification of science into basic and applied research is insignificant to the ERC experts. The awarded research must be of cognitive, pioneering character and needs to push the existing boundaries of knowledge.

ERC provides a few kinds of grants: Starting Grant – for young scientists (2-7 years after PhD), Consolidator Grant – for those who enhance their research teams (7-12 years after PhD), Advanced Grant – for experienced researchers, Synergy Grant – for scientific teams cooperating within the proposed projects as well as  Proof of concept – offered to the previous ERC editions winners.

On Tuesday, 22 November, the European agenda announced the Starting Grant program winners. Almost three thousand proposals had been sent in the current edition. The biggest competition was in physics and engineering: 1224 researchers applied for a grant. In total, ERC distributed 636 million euro to 408 project authors. The awarded projects will be realized  for five years in 26 European countries by scientists of 46 nationalities. Owing to this year’s edition, almost two thousand workplaces will be created for young PhDs, PhD students, engineers, etc.

NCU: one step ahead of the competition

Only four Polish scientists were awarded, two of which represent the Nicolaus Copernicus University in Toruń. Moreover, both Prof. Katharina Boguslawski and Prof. Piotr Wcisło work at the same faculty: the Faculty of Physics, Astronomy and Informatics. It means a huge success to our University. For the first time in history, scientists from our University have been so much appreciated by the ERC.

In this prestigious contest and in such a demanding competition, two projects offered by the NCU scientists were chosen. It is a huge success of our scientists and our University, says Prof Wojciech Wysota, Vice-Rector for Research. Financial support received from the Council will allow our scientists to carry out their innovative investigations on the highest world level. The success is also of promotional and reputational value, which will contribute to better recognition of the NCU as a European research university.”

“I am glad, of course, to be an awardee. ERC results are carefully monitored by leaders in our discipline all over the world, says Prof. Piotr Wcisło. It is a strong signal we are a respected cooperation partner. My team is very young, so it is essential for us. ERC authenticates us.”

“It is a great honor to be among the awardees of an ERC StG. It is not just any achievement but an achievement I have been working on for more than ten years, says  Prof. Katharina Boguslawski enthusiastically. Being a scientist is not a simple day job or a passion. It also includes an insane amount of working hours and sleepless nights that allow us to grow and learn continuously. Being awarded an ERS StG grant is a tremendous success for my scientific career at the national and, more importantly, international level. Like all ERC grants, my project is very ambitious and challenging. Within the next five years, I will have the opportunity to build a top-notch research team with whom I can work on a ground-breaking project.

Our scientists as well as the other awardees will be financially supported to cover all the necessary costs, i.e. salaries of team members, research, equipment, reagents, travel, publishing, conference fees, and outsourcing from the project funds.

Prof. Piotr Wcisło was granted 1,923,239 euro to realize the project entitled New experimental methods for trapping cold molecular hydrogen. It is one of the highest amounts provided in this ERC edition. Researchers applying for the Starting Grant can seek 1.5 m euro. In justified cases, the amount can be increased by another 0.5 m. Such a decision was therefore made by the experts evaluating Prof. Wcisło’s  project.  Unsurprisingly, since the referees were not only positive but also enthusiastic about the physicist’s proposal and emphasized  the significance and novelty of the proposed research.

Prof. Wcisło deals with the most fundamental building blocks of matter which can be used to explain the functioning of our reality, i.e. nature as such.

The aim of the project is to show that a molecule of hydrogen (H2) can be trapped. Together with the team I organized, employing the best and recently developed  laser technologies, I am going to create a  configuration of laser and magnetic fields strong enough to induce  a force field to further trap a hydrogen molecule inside the vacuum chamber, explains Prof. Wcisło.

Why is it just the molecule of hydrogen?

We are getting a chance to study the structure of the simplest molecules on the level  practically unattainable before, explains Prof. Piotr Wcisło. Why is it so essential? The simplest molecules are particularly important regarding basic research. Firstly, their structure can be calculated from the first principles. As a result, they can be applied to test not only the rules of quantum mechanics but also quantum electrodynamics for molecules. Secondly, the simplest molecules can be used as characteristic sensors of new hypothetical interactions in nature.

Owing to its simplicity, H2 is thus the perfect tool to study fundamental physics, quantum electrodynamics. to determine  fundamental constants. It is seeking new physics beyond the standard model.

Currently performed  experiments cannot however  provide us with the knowledge  about the huge potential of hydrogen. The molecule very weakly interacts with the magnetic, laser, or electric fields and is therefore insusceptible to the moderating-cooling techniques.

Trapping ultracool molecular hydrogen is a huge challenge, both methodologically as well as technologically speaking. In our project application, I presented solid evidence, data and calculations, to show that there exist no physical restrictions to achieve it. Moreover, the technology which allows us to do it already exists, explains Prof. Wcisło.

Noteworthy is the fact that the idea of trapping the hydrogen molecule has not been so far an issue  in the world of physics even as a concept.

“Indeed, nobody has considered or thought about it so far. Together with my students and postgraduates we discussed whether it is at least possible. We started with fundamental questions: does physics really hold us back? Does technology stop us? After countless calculations we concluded they do not, says Prof. Wcisło.

According to the physicist, the ERC grant system functions very effectively.

“It makes a scientist work hard from the very beginning, on the level of the idea he or she wants to develop, also with reference to methodology and tools, says Prof. Wcisło. Preparing my application to  the ERC I successfully applied for Grants for European Grants (Granty na granty europejskie). It allowed me to cover the expenses resulting from hiring a consulting company, employing contractors whose job was to carry out technical tasks for the application, and others payments, explains Prof. Wcisło. A few of my students and PhD students were also involved, mostly to perform the calculations of fundamental physical limitations. Two years of hard work passed before we managed to formulate the idea correctly. Then, we had to convert the idea into an attractive form to raise the ERC experts interest.

On the one hand, the planned research will enable testing the most advanced and updated quantum theory that exists: the standard model. On the other hand, a very interesting question emerges: where does the applicability of this model end? Where will quantum electrodynamics fail so that we will be able to start searching for New Physics? This is where the scientific competition starts among those dealing with this topic. Due to our studies we expect to be the first who know the answers to these questions.

Grant for a quantum

Within the next five years, another ambitious research project will be realized in Toruń by Prof. Katharina Boguslawski. Alike Prof. Wcisło, the scientist will have to build the best research team, purchase necessary modern equipment and, last but not least, work intensively for science in the years to come.  Prof. Boguslawski was granted with 1,218,088 euro to realize the project entitled Devising Reliable Electronic Structure Schemes through Eclectic Design. This idea was also much appreciated by the specialists evaluating the ERC applications.

What is Prof. Boguslawski’s field of research?

Modern quantum chemistry reached a remarkable level of description of atoms and molecules and their interactions. Theoretical approaches are particularly helpful when experimental studies are hampered or slowed down due to a trial-and-error approach. In such cases, computational chemistry can provide a much sought-after understanding of molecular properties and reactivity.

One such innovative approach models many-electron systems using electron pair states. Current electron-pair methods are, however, insufficient to reach chemical or spectroscopic accuracy for large molecules of organic electronics and must be extended.

– It has to be done to, first, accurately describe electron correlations beyond the simple electron-pairing effects, especially in cases where conventional corrections break, second, reliably predict molecular properties of both ground and electronically excited states of closed- and open-shell compounds, and third, provide an intuitive and black-box platform for non-expert users, explains Prof. Boguslawski.

According to Prof. Boguslawski,  these goals will be achieved by dressing electron-pair states with information extracted from multi-reference wave functions using a bottom-up approach. She is also planning to design a black-box interface to automatized quantum chemistry calculations using concepts of quantum information theory.  Within the next five years, she will also deal with  elucidating the structure-properties relationship using the picture of interacting orbitals.

The synergy between an inexpensive but reliable quantitative description and the qualitative interpretation of molecular interactions will accelerate the discovery of new materials in organic electronics, explains Prof. Boguslawski.