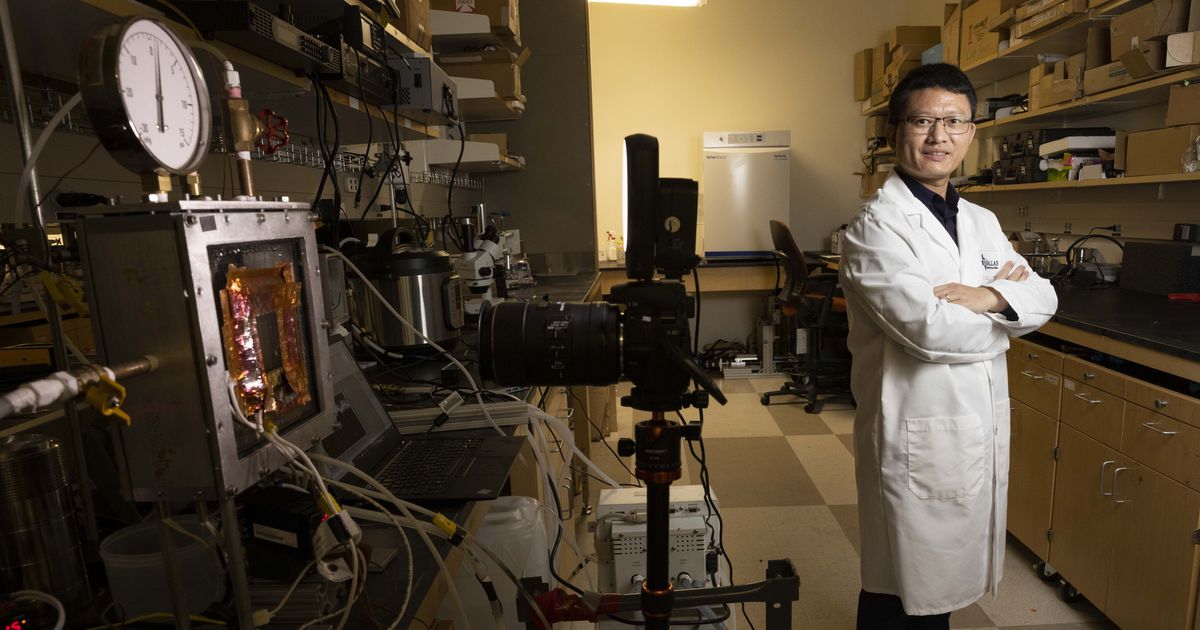 In Star Wars, Luke Skywalker grows up on the hot desert planet Tatooine. His family owns a moisture farm that uses devices called “vaporators” to pull drinking water from the air.

But while vaporators are a figment of science fiction, the technology that makes them work may be moving closer to fact.

Researchers from Xianming “Simon” Dai’s lab at the University of Texas at Dallas are developing technology that can pull water from the air. They recently published a paper in the journal Proceedings of the National Academy of Sciences showcasing a more efficient way of harvesting water that takes inspiration from a carnivorous plant.

The technology has a long way to go before it’s ready for human use. But the researchers hope to one day create a portable device that people could use to access clean water during shortages.

“We’re trying to get water everywhere, at any time, anywhere. That’s our goal,” said Dai, a UTD assistant professor of mechanical engineering.

In August, 62% of Texas faced extreme drought, according to the U.S. Drought Monitor, a partnership between the National Drought Mitigation Center, the U.S. Department of Agriculture and the National Oceanic and Atmospheric Administration.

Triple-digit temperatures like the kind Dallas experienced this summer can make heat waves and droughts worse, leading to water shortages.

Dai is interested in decentralized water distribution: providing people with the water they need without the use of city-regulated water treatment plants and reservoirs. He has been studying water harvesting for the past 10 years, hoping to improve access to clean water by harnessing a natural process called condensation.

When you take a cold glass of water outside on a hot day, tiny water droplets can form on the rim of the glass. The warm water vapor in the air is drawn to the cold glass and cools down, or condenses, into those droplets.

Dai and his lab aimed to harvest water using a similar approach. If they could keep a surface cool, drawing warm water vapor to it, they could condense the water into droplets and collect it.

One issue slowing down current water harvesting tech is that once water droplets form on a surface, they have nowhere to go.

They accumulate on the surface, slowing down the formation of new droplets. Dai and his lab devised a novel solution to this problem that collects water droplets similarly to how the carnivorous pitcher plant devours insects.

The vase-shaped pitcher plant lures its prey in by secreting sweet nectar. When an insect lands on the plant’s slippery upper rim, it falls into the “vase,” where it is digested.

Dai and his lab set a similar “trap” for already-formed water droplets by creating several T-shaped channels – smaller than a human hair in diameter – in their test water harvesting system, a rectangle about 2 centimeters wide made of silicon.

During water collection, the water droplets form on the very top of the T, which is coated with a slippery lubricant. Then, the droplets slide off the T into channels where they are collected.

“If you can remove the droplet from the surface, you have more area for condensation to occur again,” said Dylan Boylan, a second-year Ph.D. student in Dai’s lab.

The lab’s technique for water collection increased the water harvesting rate compared to a model without the T-shaped channels. According to Boylan, their collection surface could fill a glass of water in about seven minutes in humid conditions.

Bringing it up to scale

Dai’s use of channels to make water harvesting more efficient has not been thoroughly explored in existing research. There’s more work to be done before his technology could be something that’s available for purchase.

Dai’s water harvesting system relies on keeping its surface cold to draw in warm water vapor for condensation. That takes energy – especially to produce enough water to keep a family hydrated during a shortage. The technology also relies on having vapor in the air to produce water from, meaning that it might be more difficult to operate in hotter, drier climates.

How the Texas drought can affect flooding during extreme rains

Sameer Rao, an assistant professor at the University of Utah whose research interests include water harvesting and purification, said Dai’s research is an exciting advancement to the field. He added that future research will be necessary to see if this technology can be scaled up to address a problem as large as country-wide or global water scarcity.

“It is promising,” said Rao, who was not involved with Dai’s study. “But I think addressing questions about, ‘Is this promising when you make a million of these?’ is something that is worth exploring.”

Now that Dai’s lab has the fundamentals of the technology down, his team is working to figure out how they can package it into something that’s scalable and affordable. Dai also sees applications for his work in systems like air conditioning, where extracting vapor from the air could help control the humidity of a room.

He said one of his favorite parts of exploring water harvesting is harnessing nature’s secrets to improve human life. Nature has had water harvesting down for a while: the Namib Desert beetle, native to southwestern Africa, stays hydrated by condensing water droplets onto its back that drip down into its mouth.

Dai and Boylan are hopeful that someday, humans can benefit from the process. “If we can see that nature can do it, we can take that idea and we can make it a reality for ourselves,” said Boylan.

Adithi Ramakrishnan is a science reporting fellow at The Dallas Morning News. Her fellowship is supported by the University of Texas at Dallas. The News makes all editorial decisions.