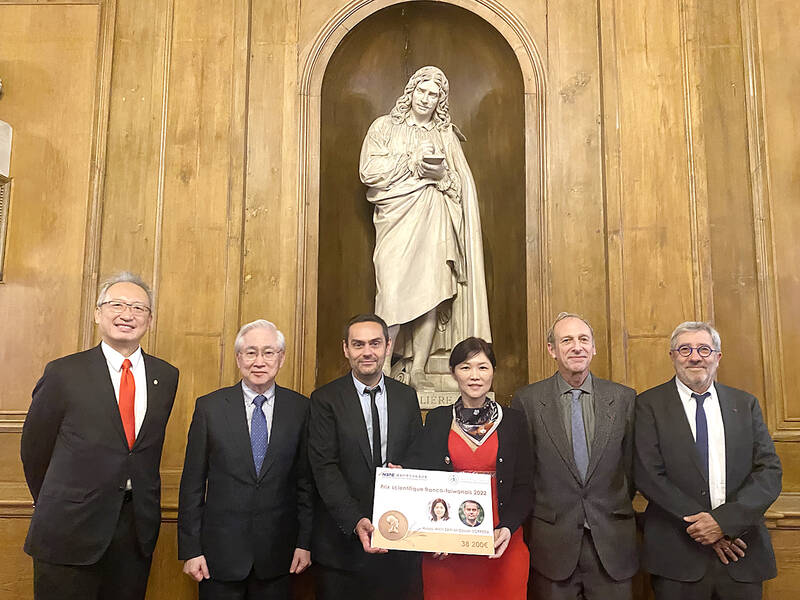 Zan Hsiao-wen (冉曉雯) and Olivier Soppera on Wednesday received this year’s Franco-Taiwanese Scientific Grand Prize in Paris for their joint development of a semiconductor metal oxide gas sensor for use in medical applications.

Zan, a professor at National Yang Ming Chiao Tung University’s Department of Photonics, specializes in optoelectronic semiconductor components, and has been devoted to organic and oxide semiconductor research for more than 25 years.

She also chairs the women’s engineering group at the Taiwan branch of the Institute of Electrical and Electronics Engineers (IEEE), and holds more than 80 patents for inventions pertaining to novel structural semiconductor devices.

Soppera, the head researcher of the Mulhouse Materials Science Institute at the French National Centre for Scientific Research, is an expert on the development of photo materials for micro- and nanofabrication.

The metal oxide gas sensor is based on the Internet of Things and can detect ammonia in breath, the researchers said.

In 2019, Zan proved through animal and human trials that exhaled ammonia is a useful biomarker for predicting kidney function in people with chronic kidney disease.

Zan said the award meant a lot to them as their field of research is not considered mainstream.

“It took a lot of effort, from the development of components to testing and application,” she said, adding that their goal had been to produce something useful to society.

The French researcher also expressed his excitement about the honor and praised the collaboration between France and Taiwan.

Soppera said his research with Zan would continue, as there are still many new projects in the works that would hopefully improve people’s lives.

The Franco-Taiwanese Scientific Grand Prize, founded in 1999, is an annual award for researchers in France and Taiwan. It can be awarded to scientists in any field, but prioritizes research that facilitates collaboration between Taiwan and France.

Comments will be moderated. Keep comments relevant to the article. Remarks containing abusive and obscene language, personal attacks of any kind or promotion will be removed and the user banned. Final decision will be at the discretion of the Taipei Times.