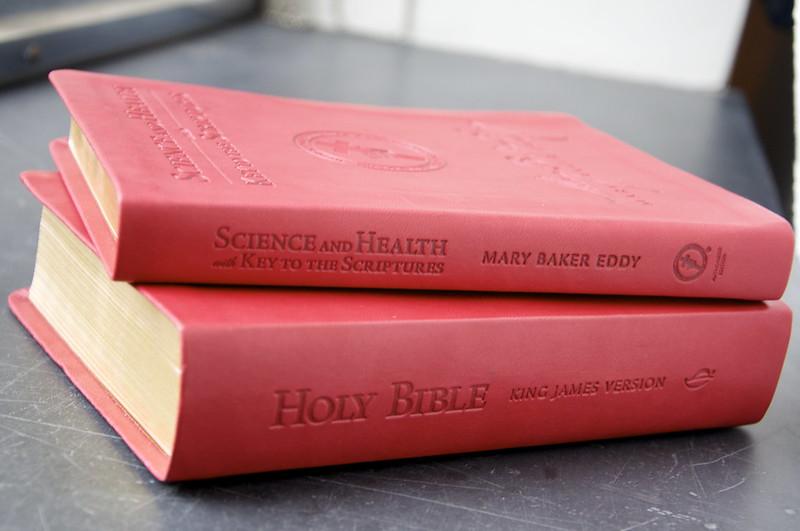 Editor’s Note: FāVS has launched a new series on Sacred Texts. In most religious traditions they are considered sacred because it is believed they were divinely revealed or inspired, and they form part of an authoritative canon. In this series we ask how scripture is used in particular traditions and if it’s necessary or dispensable. Is it subject to interpretation? What is its purpose? How have scriptures been used to promote or justify certain types of behavior? And, do ancient scriptures have any relevance today?

The Holy Bible is the sacred and central text of Christian Science. The religion’s founder, Mary Baker Eddy, left no doubt on this point. She wrote in “Science and Health with Key to the Scriptures,” her denominational textbook, “The Scriptures are very sacred. Our aim must be to have them understood spiritually, for only by this understanding can truth be gained.” The writings of Eddy are also studied as an aid to understanding the Bible. There is an emphasis on living what we learn – on growing spiritually and applying our understanding in life practice. This is to be done humbly and prayerfully, looking to the grace and guidance of God for salvation and healing.

This central role of the Bible in Christian Science is underlined in the six brief religious tenets or key points of the faith that Eddy included in her textbook. These were summarized in 1894 by a Chicago journalist in the Daily Inter-Ocean: “The ‘confession of faith’ [of Christian Science] includes the declaration that the Scriptures are the guide to eternal Life; that there is a Supreme Being, and His Son, and the Holy Ghost, and that man is made in His image. It affirms the atonement; it recognizes Jesus as the teacher and guide to salvation; the forgiveness of sin by God, and affirms the power of Truth over error, and the need of living faith at the moment to realize the possibilities of the divine Life.” The final tenet, not represented in this summary, but which is mentioned in Eddy’s “Science and Health” textbook, takes the form of a sacred Christian commitment: “And we solemnly promise to watch, and pray for that Mind to be in us which was also in Christ Jesus; to do unto others as we would have them do unto us; and to be merciful, just, and pure.”

Fundamental in the daily religious reading and prayerful study for Christian Scientists, the Bible is also a main component of a weekly topical “Bible Lesson” on select subjects such as “Doctrine of Atonement,” “God the Only Cause and Creator,” and “Christ Jesus” to name just a few. The reading aloud of this Bible Lesson, which also includes explanatory and corroborative passages from “Science and Health,” makes up the primary portion of Sunday church services along with hymns, a related Scriptural reading and time for silent and audible prayer. The study of the Bible Lesson topics helps readers to better understand and apply the spiritual meaning of the Bible – a meaning that many find has practical healing power as well as offering moral and spiritual regeneration.

Likewise, Bible education is at the heart of the children’s Christian Science Sunday school lessons. Eddy affirmed, “The Sabbath School children shall be taught the Scriptures …” The first lessons for students are the Ten Commandments, the Lord’s Prayer and the Sermon on the Mount. The next lessons are based on the weekly Bible Lesson and include lots of exploration of Bible stories, especially the teachings and healings of Jesus Christ.

As central as the Bible is to our faith, still, the question sometimes arises whether Christian Scientists consider their denominational textbook, “Science and Health,” to be scripture or scriptural. The answer is no. Those who study the book’s teachings do not see it as another bible or a substitute for the Holy Bible. The very title of Eddy’s textbook makes it clear that the book helps explain but does not replace the Bible. A key, though indispensable, does not replace the door or chest it opens.

Readers of Eddy’s book do consider it to be vital, inspired and unique. And they deem it an authoritative statement of Christian Science or the Science of Christ – the laws of God lived and taught by Christ Jesus, and which Eddy felt can be discerned and demonstrated through a spiritual sense of the Scriptures. Many have found her textbook to be stimulating, vivid, insightful and an impetus for healing, which includes moral and spiritual growth. While not scripture, as noted earlier, “Science and Health” does companion importantly with the Bible in Christian Science churches. In fact, it is these two books that serve as the “dual and impersonal pastor” read by lay readers in lieu of clergy and personal sermons.

Spokane FāVS also poses the question (see above) whether “ancient scriptures have any relevance today.” In 2021, at least twenty million people answered this question in the affirmative by buying a Bible, which is by far the best selling book of all time. (Note that two other sacred texts, the Torah and the Quran, also remain major best sellers.) Many people still go regularly to the Scriptures for comfort, guidance and truths that they feel transcend human self and human theories. Christian Scientists agree that the Bible is not only relevant but pivotal – both for themselves and for humanity. If we yearn for a way out of the distresses and divisions of the day, perhaps we would do well to consult more deeply a resource that has powerfully resonated with, and given higher purpose to, the human heart for many an age. And Christian Scientists are among those who take seriously the Bible’s promise of practical help and healing, as well as offering profound spiritual answers.

Lance Matteson, originally from Colorado, was raised mostly in the Seattle area, where he practiced law and now lives. He has degrees from Harvard (AB) and Willamette (JD) and worked many years in community and economic development in West Africa, the Middle East, and Northeastern US. He now serves his church as the Christian Science Committee on Publication for the State of Washington.