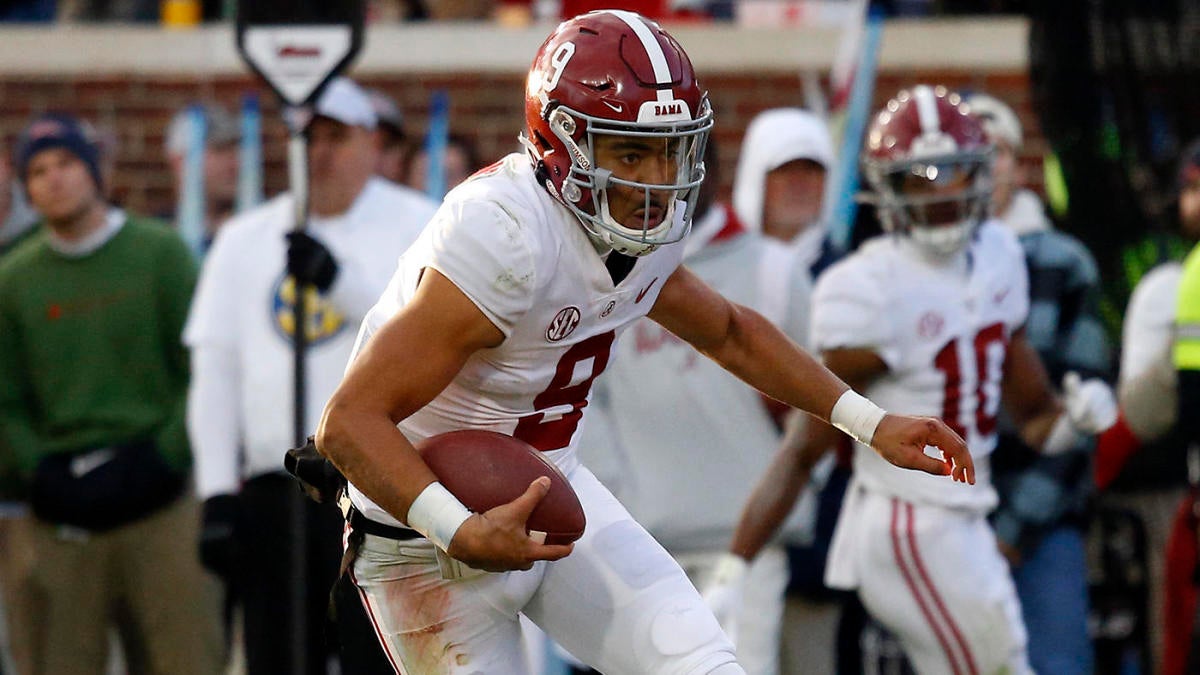 Rivalry Week is upon us, which means bragging rights are on the line across the SEC, including when No. 7 Alabama tees it up with rival Auburn in the Iron Bowl in the SEC on CBS Game of the Week. The Crimson Tide have been eliminated from SEC West contention, but a state championship is up for grabs after the four-overtime thriller last season. Auburn has had a rough campaign, but an upset over the Crimson Tide with interim coach and legendary Tigers running back Carnell Williams at the helm would send the program into the offseason on a much-needed high.

Elsewhere, No. 1 Georgia will face Georgia Tech as the Bulldogs look to cap off another perfect regular season, No. 5 LSU looks to keep its faint College Football Playoff hopes alive at Texas A&M and South Carolina will be looking to notch its second straight upset over No. 8 Clemson.

Let’s break down each game and make picks straight up and against the spread.

Appetizer: Style points for the Tigers

Don’t be surprised if LSU coach Brian Kelly leaves his foot on the gas vs. Texas A&M if his Tigers can jump out to a lead. He knows that in this day and age, making a great final impression can go a long way. No, Texas A&M isn’t exactly a juggernaut this year. In fact, it’s a disaster.

Let’s play a game for a second. Say, hypothetically, LSU blows the doors off of Georgia in the SEC Championship Game. Would the CFP Selection Committee give the two-loss Tigers a spot in the four-team playoff? They would have two quality wins over Georgia and Alabama, but the loss to Tennessee doesn’t look as great as it did prior to Tennessee’s loss to South Carolina, and the season-opening loss to No. 16 Florida State isn’t excusable for a title-worthy team.

LSU topped UAB 41-10 last week despite only being a two-touchdown favorite. A blowout win over Texas A&M combined with a potential upset over Georgia would show the committee that it is peaking at the right time while creating some interesting conversations in that meeting room.

Auburn is a 22-point underdog to Alabama, which suggests that this edition of the Iron Bowl is poised to be a blowout. Not so fast. It was a 20.5-point spread last season, and Alabama needed four overtimes to beat an Auburn team that was led by quarterback T.J. Finley, who was hampered by a leg injury throughout the game.

This one is in Tuscaloosa, Alabama, and there’s no doubt that the crimson and white crowd will make things difficult for the Tigers. However, the Auburn pass defense has been considerably better over the last three games — two of which came against pass-happy Mississippi State and Western Kentucky. The Crimson Tide wide receiving corps has been inconsistent all year. If Auburn can shut down the deep threats and force Alabama to be one-dimensional, it’ll have a chance.

Plus, assuming that Carnell Williams doesn’t get the full-time Auburn job, sending him out with a three-game winning streak and win over a team he had 204 rushing yards against in 2003 would be a storybook ending to a wild season on the Plains.

Once upon a time, South Carolina quarterback Spencer Rattler was a Heisman Trophy favorite at Oklahoma. He didn’t live up to that hype, but he looked the part last Saturday when he thew for 438 yards and six touchdowns in the 63-38 win over Tennessee. Could he repeat the feat and bring Clemson’s CFP hopes to a screeching halt? It’ll take an effort even better than the one we saw vs. the Volunteers.

The Tigers are giving up just 214.5 passing yards per game and, more importantly, 6.2 yards per attempt. Big plays in the passing game is exactly what made Rattler successful on Saturday when he averaged 11.8 yards per attempt. Rattler wrecked Tennessee’s CFP chances last weekend, and he has a chance to do the same this weekend to his team’s arch-rival. It’ll take much more magic than last week, though.

Straight up: 75-25 | Against the spread: 46-44-2
*Previous picks were made on Instagram since SEC Smothered & Covered starts in Week 3

Mississippi State at No. 20 Ole Miss

The Rebels have lost two straight and their defense has regressed to the point where even a 703-yard offensive effort can earn a win. Plus, rumors are swirling that Rebels coach Lane Kiffin could be eyeing other jobs within the SEC. The Ole Miss pass defense is giving up 216.1 yards per game through the air (10th in the SEC), and Bulldogs quarterback Will Rogers will stay hot in an upset win over the reeling Rebs. Pick: Mississippi State (+2.5)

The Tigers offense has struggled for the majority of the season, and that’s not a good sign considering Arkansas just beat an Ole Miss team that is designed specifically for shootouts. Razorbacks quarterback KJ Jefferson is back, and it’s almost impossible to prepare for how he operates as a between-the-tackles runner and passer. Jefferson and star running back Raheim Sanders will run away from the Tigers in the second half. Pick: Arkansas (-3)

Florida at No. 16 Florida State

The Seminoles have topped the 38-point mark in each of their last four games, which included a 38-3 win over Syracuse two games ago. That’s going to force Gators quarterback Anthony Richardson to become more of a threat with his arm, and that’s not his strong point. Yes, he threw for 400 yards in last weekend’s loss to Vanderbilt, but he had to do that in order for his team to have a chance after a slow start. I’ll take the Seminoles to win and cover, especially since a 10-point win cashes. Pick: Florida State (-9.5)

Georgia Tech at No. 1 Georgia

The Yellow Jackets have actually been playing some really good defense lately, including last week when it held the potent North Carolina offense to 365 yards in the 21-17 upset road win in Chapel Hill. They’ll be able to force enough stops to keep this one within five touchdowns. Don’t get me wrong, Georgia will win and control it throughout, but the Bulldogs have bigger fish to fry and will pull their starters early in the fourth quarter. Pick: Georgia Tech (+35.5)

South Carolina at No. 8 Clemson

The Gamecocks will come crashing back down to Earth at Clemson as Rattler fails to recapture the magic of last week against a much better pass defense. Tigers quarterback DJ Uiagalelei will avoid mistakes, they’ll go on long drives to make sure that Rattler stays on the sideline and its stout defensive front seven will force enough mistakes to give them a late cover. Pick: Clemson (-14.5)

The Cardinals could be without star quarterback Malik Cunningham, though even if he plays, he is unlikely to be at 100%. The Wildcats shurt down Georgia’s offense for the majority of last week’s loss, and it won’t be intimidated by anything that the Cardinals do with or without Cunningham. Wildcats coach Mark Stoops will get a balanced performance from running back Chris Rodriguez Jr. and quarterback Will Levis, which will be enough to win it by a touchdown or more. Pick: Kentucky (-3)

Auburn at No. 7 Alabama

The “Cadillac factor” under interim coach Carnell Williams has made a huge difference for the Auburn Tigers, but this is a different animal. This is the Iron Bowl against an Alabama team that is significantly more talented, and has a quarterback in Bryce Young who is likely making his last home start before moving on to the NFL. I fully expect this to be close(ish) for two-and-a-half quarters but for things to get sideways late and Young to go out with a bang. Pick: Alabama (-22)

Quite frankly, I have no idea why LSU is only a 10-point favorite over an Aggies team that is depleted by injuries and have the end of a miserable season in sight. LSU has polished off a punishing rushing attack with John Emery Jr. and Noah Cain in the backfield, and quarterback Jayden Daniels taking the snaps. The last thing Texas A&M will want to do is get in a fistfight when there’s nothing on the line. This one will get very, very ugly. Pick: LSU (-10)

No. 10 Tennessee at Vanderbilt

Let’s go back in time to one month ago and think about how crazy it would be to say that Tennessee will only be favored by two touchdowns over Vanderbilt in the regular-season finale. Yet, here we are with the reeling Volunteers going up against a Commodores crew that is riding a two-game winning streak. Volunteers quarterback Joe Milton steps in for Hendon Hooker and lights the ‘Dores pass defense up to make this one a shootout. Vandy won’t be able to keep up, and the Vols will enter bowl season with a little bit of momentum. Pick Tennessee (-14)

Which college football picks can you make with confidence in Week 13, and which top-25 teams will go down hard? Visit SportsLine to see which teams will win and cover the spread — all from a proven computer model that has returned almost $3,000 in profit over the past six-plus seasons — and find out.