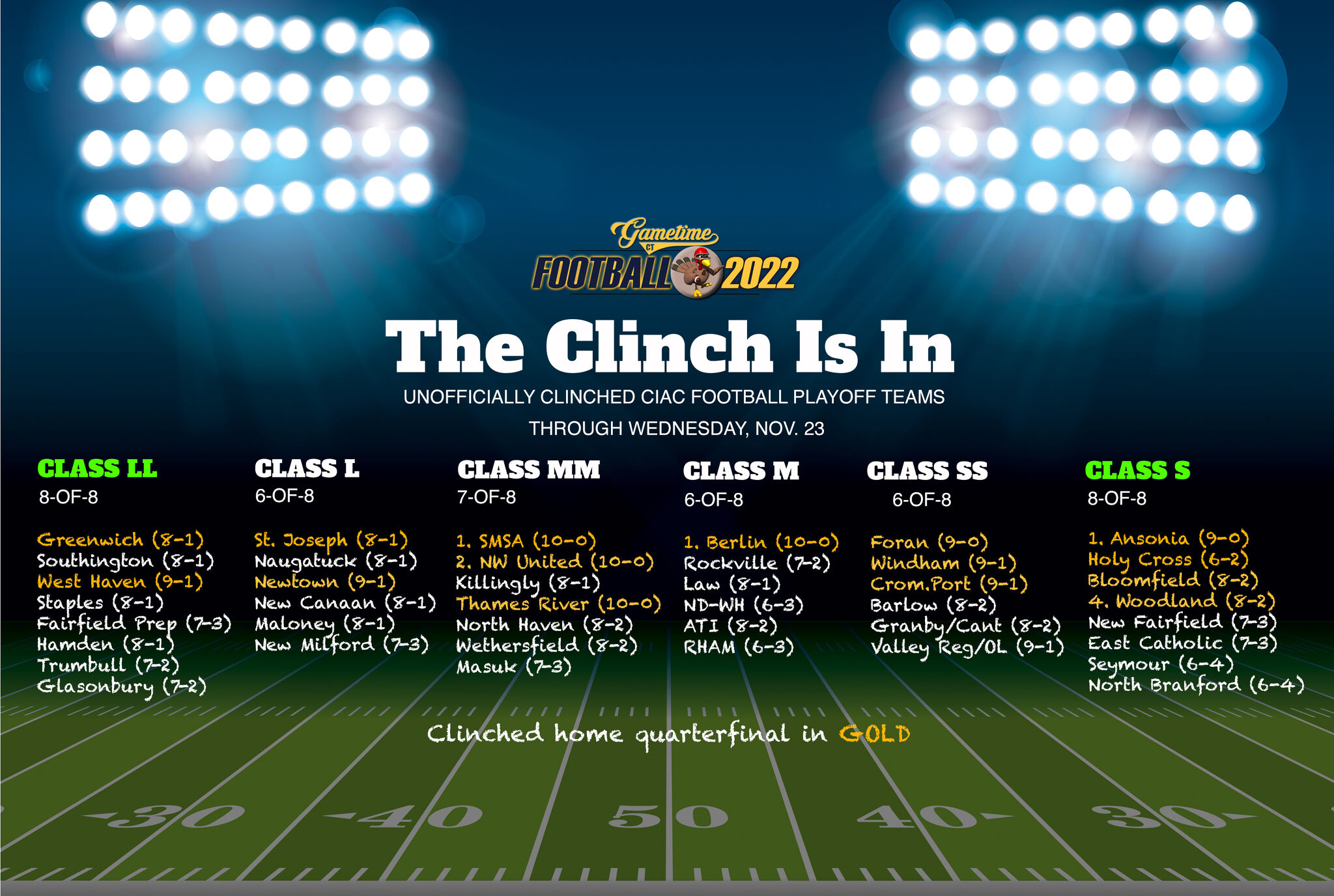 And, finally, North Branford‘s 51-18 victory over Coginchaug Co-Op in the Route 17 Bowl, coupled with Stafford Co-Op’s 20-14 victory over Windsor Locks Co-Op, gave the T-Birds the boost they needed to outpoint rival Haddam-Killingworth for the fourth and final spot in Class S.

(Yes, this development comes despite H-K knocking off North Branford 15-14 in the regular season and both finishing 6-4. North Branford’s win over Stafford gave the T-Birds the needed overall boost to their points to seal a playoff spot.)

Forty one of 48 available spots over six playoff divisions have been filled heading into Thanksgiving Day. Remember, everything is unofficial until after the CIAC football committee meets Friday morning and approves the points following the conclusion of tomorrow’s games.

So, before you head out to your games, here’s your Thanksgiving morning breakdown who needs whom to do what to get into the state playoffs today:

The field has been set for a while, but Wednesday night means seeding has a ways to go. Greenwich (8-1) will finish first with a win over Staples (8-1).

If the Cardinals lose, Southington (8-1) can grab the top spot with a win over Cheshire. If they both lose, first of all, how wild would it be to see the top three teams going down?

But more directly, Greenwich and West Haven (9-1) would once again be first and second, with the order coming down to four games, only one of which the Cardinals would need to go their way.

Staples controls its own destiny for a home game but has to beat Greenwich.

If it’s not the Wreckers, no one quite controls its fate, but 7-3 Fairfield Prep’s victory over West Haven has given the Jesuits a shot, at least; losses for Hamden (8-1) and Trumbull (7-2) would do it, and Fairfield Prep could compete with either of them if they win.

Cheshire (over Southington) and Darien (over New Canaan) will both clinch with victories. Darien is almost assuredly out with a loss. Even if Cheshire loses, it can still get in over Shelton if either Hillhouse or Notre Dame-West Haven wins.

Shelton’s hopes on Wednesday night were bolstered significantly when Ridgefield, Hand and North Haven all won. Shelton will now clinch with a Darien loss. If that doesn’t happen, Shelton would then need Cheshire to lose and get either Hillhouse or Notre Dame-West Haven to lose to stay ahead of Cheshire.

St. Joseph will be the No. 1 seed with a victory over Trumbull. Naugatuck can claim at least the No. 2 seed by beating Ansonia. Newtown has clinched a home game and can do no worse than the No. 3 seed. It could even get the No. 1 seed if St. Joseph and Naugatuck lose.

Maloney and New Canaan both need to win for a shot at one of the last home games. If everybody wins ahead of them, they could be 4-5 depending on how their bonus points shake out. New Milford can finish anywhere between Nos. 6 and 8. Cheshire and Darien will both surpass the Wave with wins.

North Haven (8-2) clinched its spot with its win over Amity, leaving only one spot available in this wild division. It’s simple now: If Platt (6-3) beats Maloney, the Panthers are in. If Maloney wins, Wilton (7-3) — which hasn’t played in nearly three weeks — outwaits everyone to snag that eighth spot.

Northwest United (10-0) clinched the second seed behind SMSA (10-0). Killingly (8-1) will be third if it wins. But if Woodstock Academy claims the upset, Thames River (10-0), which clinched a home game Wednesday night, gets third, and fourth would come down to points with Killingly, Wethersfield (8-2) and North Haven, though Killingly still has a pretty good shot at it.

Platt is either seventh or out. Wilton is either eighth or out. Masuk (7-3) takes the other spot, whichever way Platt/Wilton goes.

And then there were 12: Watertown can’t quite get there anymore.

Two spots remain open. Hartford Public (5-4) will be within 10 points of clinching a spot if it beats Weaver. It’ll actually clinch if East Lyme (4-5) also wins.

Branford (4-5) and East Lyme will be in a close points race behind the Owls if they both win. East Lyme will come in with an advantage in this case, but needs some longshots to come through to get to its points ceiling.

If a couple out of Hartford Public, Branford and East Lyme lose, the door potentially squeaks open for a Woodstock Academy (4-5) or a Lyman Hall (4-5). Avon (5-5) needs a bit of a miracle but still has a path.

ATI’s (8-2) loss means that all three of Rockville (7-2), Notre Dame-West Haven (6-3) and Law (8-1) can earn home games with wins Thursday morning. Law and Notre Dame could get there even with a loss. A Rockville loss will certainly get ATI a home game.

Foran, C/P and Windham each earned one of the top four seeds. A win over Law makes Foran the top seed, a loss and Cromwell/Portland is the top seed. Unless Foran loses, Windham is just about locked in as the No. 3 seed.

There are two spots remaining. In short: Ledyard (8-1, vs. Fitch) and Gilbert/Northwestern/Housatonic (7-2, vs. St. Paul) will wrap up this class with victories.

Ledyard  is the linchpin of the entire division. The Colonels need to either beat Fitch or get one of their six available bonus games come through to clinch.

A victory over Fitch and Ledyard will likely be the No. 4 seed. A loss could drop Ledyard out entirely if no bonuses come through, but more likely will drop them as far as No. 8 if Gilbert/Northwestern/Housatonic beats St. Paul.

Barlow and Granby/Canton are locked together and dependent on what happens with Ledyard. A Ledyard win, they’re the No. 5 and 6 seeds, respectively. A Ledyard loss and they play the 4-5 game in Redding.

GNH will likely fall in behind Valley at No. 8, or could be No. 7 (and Valley 6) should Ledyard drop into this neighborhood. A loss, and the Yellowjackets are just about out, opening the door for Ellington (7-2) to get the No. 8 seed with a win over Rockville. Rocky Hill (7-3) now needs both Gilbert and Ellington to lose to even think about a back door.

The bracket is halfway set, too: Seymour (6-4) is locked into seventh with its loss to Woodland (8-2), which is locked into fourth. (The CIAC’s points standings say Seymour comes into the day ninth, but the Wildcats have at least 40 guaranteed points coming when all of Thursday’s games are done.)

Bloomfield (8-2) has an edge for second on Holy Cross (7-2) whether or not the Crusaders beat Wolcott on Thursday. If Wolcott pulls the upset, Holy Cross is definitely third.

East Catholic (7-3) needs only one bonus gained or one lost to New Fairfield (7-3) to claim fifth and leave sixth to New Fairfield. (Should they somehow stay tied, we’ll be getting deep into the tiebreaker weeds.)