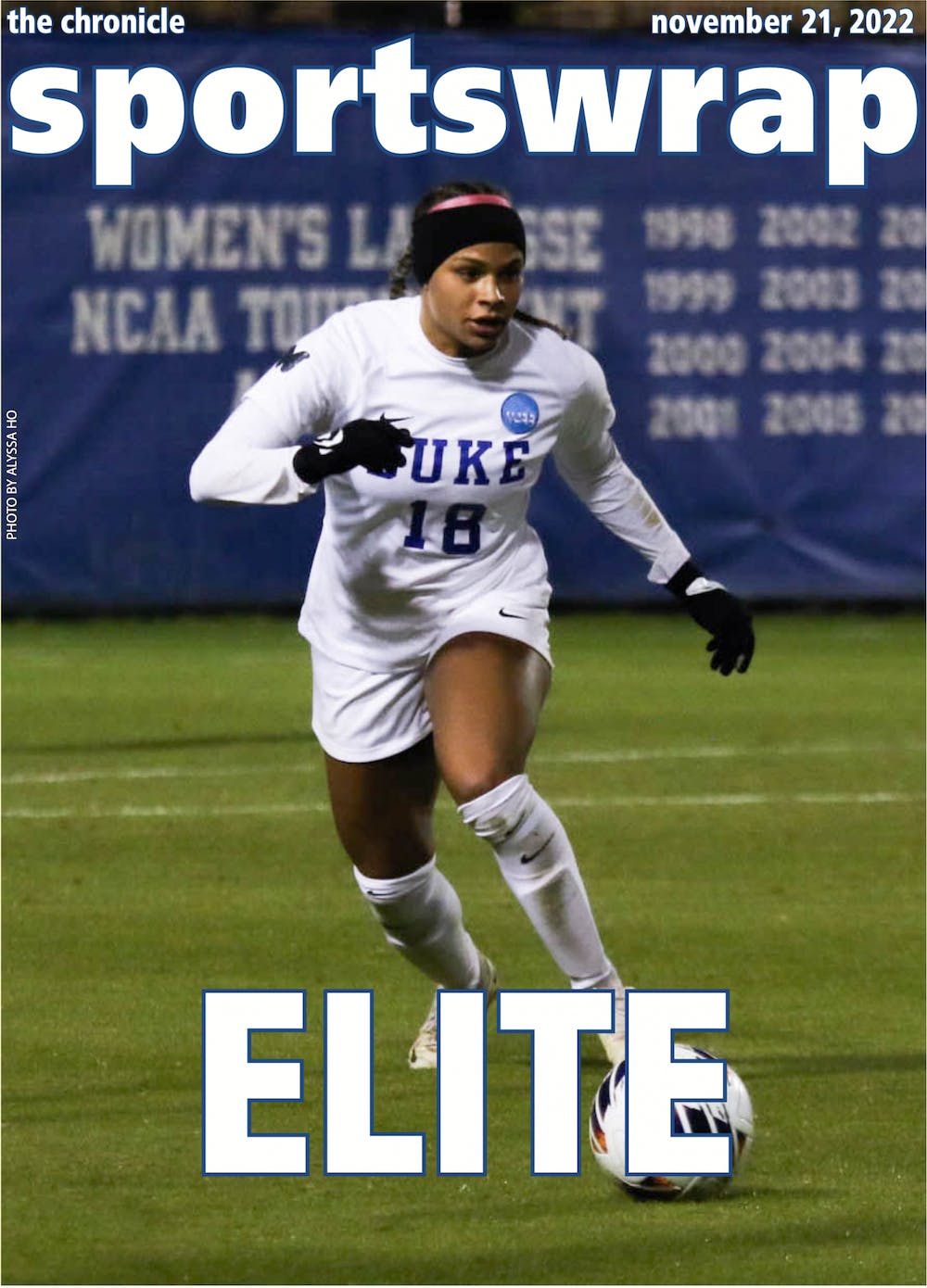 Sportswrap is your one-stop shop for everything Duke athletics, where we’ll recap how each of Duke’s sports currently in competition performed over the last week and give a brief look ahead. Here is our recap for the week of Nov. 14-Nov. 20.

For the first time since Oct. 15, Duke lost in ACC play Saturday in a down-to-the-wire matchup at Pittsburgh. Sophomore receiver Jordan Moore (14 catches, 199 yards) put together a career performance in a sub-freezing environment at Acrisure Stadium, but the Blue Devils’ rally from down 28-14 in the fourth quarter fell just one two-point conversion short as the Panthers held on 28-26 in the final minute. One game remains for Duke (7-4, 4-3 in the ACC) before bowl season, with Wake Forest coming to Wallace Wade Stadium for Senior Day at 3:30 p.m. Saturday. -Jonathan Levitan

Thanks to a quick start and two goals from sophomore Michelle Cooper, No. 2-seed Duke defeated No. 3-seed South Carolina 2-1 and is moving on to the Elite Eight at the NCAA tournament, where just one road matchup against No. 1-seed Alabama stands in its way of returning to the College Cup for the first time since 2017. Notably, five ACC teams remain among the nation’s eight best teams. The Blue Devils and Crimson Tide meet Friday in Tuscaloosa, Ala., in Duke’s first true away game since the first round of the ACC tournament. -Levitan

Duke may have bowed out of the ACC tournament earlier than expected, but the same cannot be said for the Big Dance. In its opening matchup Sunday at Koskinen Stadium, the seventh-seeded Blue Devils rode a flurry of goals from Peter Stroud, Shakur Mohammed and Kamran Acito to a 3-1 win against Denver. The result sends Duke to the Sweet 16 for the second consecutive year, where it will face one of FIU or New Hampshire at home for a spot in the quarterfinals. -Andrew Long

No. 7 Duke lost 69-64 in a grueling battle against No. 6 Kansas Tuesday in Indianapolis before coming back home to defeat Delaware Friday night. In the Champions Classic matchup, a sloppy first half gave way to a dramatic finish in which freshman Kyle Filipowski and the Blue Devils could not hold up to Kansas’ Gradey Dick and Jalen Wilson in the team’s first loss of the year. Freshman Tyrese Proctor found success against Delaware, logging a double-double in the 92-58 win. The Blue Devils face Bellarmine Monday at 8:30 before heading to Portland, Ore., for the Phil Knight Legacy. -Micah Hurewitz

Duke continued its strong start to the season, using its size and interior presence to take a 19-point victory against Texas A&M at home Thursday. The Blue Devils once again employed a full-court press against the Aggies, and as a result, scored an impressive 30 points off of turnovers. On Saturday, Duke had a big win at Toledo, beating the Rockets 58-41 despite totaling 19 turnovers. The Blue Devils will look to continue their undefeated start to the season Friday when they take on Connecticut in the Phil Knight Invitational in Portland, Ore. -Martin Heintzelman

Though Duke did not qualify as a team for the NCAA Championships, it did send one runner each from the men’s and women’s rosters to represent the Blue Devils at the race hosted by Oklahoma State. Sophomore Amina Maatoug competed in the women’s 6K on a famously hilly course, speeding past more than 200 racers to finish 28th and earn All-American honors. Lining up next in the men’s race, senior Zach Kinne persevered through 10 cold kilometers to end his undergraduate career in 120th place. As cross country season has now reached its end, coaches and runners shift gears to indoor track and field season. -Sophie Levenson

Duke had a successful weekend at the N.C. State Invite in Raleigh with multiple of the best times in program history, including 18 NCAA B-cuts. The meet was highlighted by star junior Sarah Foley, who set two school records in the 100-yard and 200-yard breaststroke; she also placed second in the 200-yard medley. After Thanksgiving, some of the Blue Devils will travel to Greensboro, N.C., to compete at the US Open before joining the rest of the team in Charlotte, N.C., for their last meet of the semester against Queens Dec. 3. -Babu Chatterjee

Joy fills the air as the holiday season approaches, but it was not the same for the Blue Devils at Sunday’s Keystone Classic in Philadelphia. Duke placed ninth overall with 34.5 points, just ahead of 10th-place Franklin and Marshall with 30 points. It was not a close meet as Virginia Tech racked up 174.5 points to win first place. Blue Devil heavyweight senior Jonah Niesenbaum had something to be delighted as he won his second-straight tournament. Duke continues its journey on the road Dec. 4 against Virginia Military Institute and Franklin & Marshall in Lexington, Va. -Nabila Hoque

Get The Chronicle straight to your inbox

Signup for our weekly newsletter. Cancel at any time.