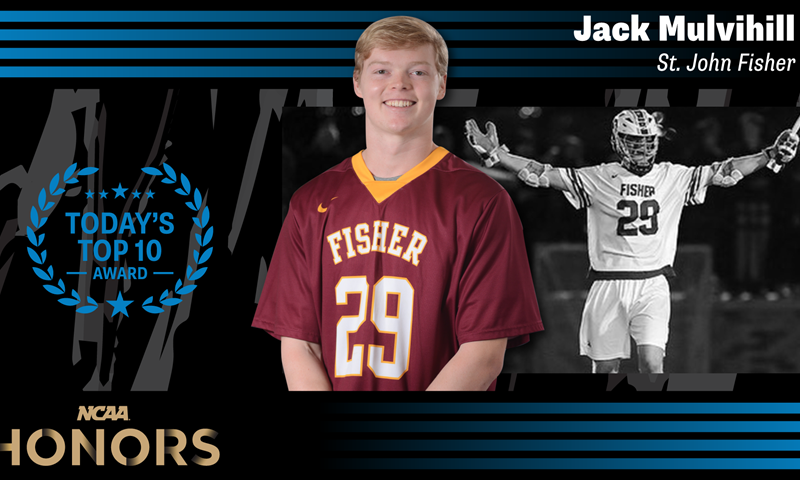 Former St. John Fisher men’s lacrosse standout Jack Mulvihill was selected as a 2023 NCAA Today’s Top 10 Award recipient, recognizing his outstanding achievements as athletes, students and contributors to their campuses and communities. He will be honored at the Honors Celebration on Jan. 11 during the NCAA Convention in San Antonio.

The awardees each have completed their undergraduate studies and their athletics eligibility and are pursuing successful futures. The NCAA Honors Committee is composed of nationally distinguished citizens and dedicated representatives from NCAA member schools and conferences, including past awardees.

“It is truly an unbelievable honor to receive this award,” said Mulvihill. “I am tremendously grateful and thankful to accept this and know it represents not just myself, but my teammates, coaches, family, school and the Empire 8.”

A native of Dewitt, NY, Mulvihill, held a spectacular 3.95 grade-point average as an inclusive adolescence education major. He was a mainstay on the Empire 8’s President’s List, having earned the prestigious honor nine times for recording a GPA of at least a 3.75. He carried over his academic excellence to his graduate studies where he earned a 4.0 during the 2021-22 academic year en route to earning College Sports Communicators (CSC) Men’s At-Large Academic All-America honors for the second straight year. He was also a 2021 USILA Scholar All-American.

On the field, Mulvihill was named a first team All-American selection by the United States Intercollegiate Lacrosse Association in 2022. Over 18 games in 2022, Mulvihill posted a career-high 58 points including 34 goals and 24 helpers as the DeWitt native accounted for 100 shots overall in leading the Cardinals to their third straight E8 title and third trip to the NCAA Tournament. In addition, he was a 2021 USILA Second Team All-American and garnered honorable mention accolades in 2019. He was a second-team USILA Preseason All-American in 2022, a third-team preseason selection in 2021 and an honorable mention Inside Lacrosse Preseason All-American in 2020.

In his role with national SAAC, Mulvihill was a key voice in helping get several Empire 8 proposed pieces of legislation passed over the last two years.

“Jack epitomizes all of the tenants of this most prestigious honor,” said Empire 8 Commissioner Chuck Mitrano. “His excellence in the classroom and on the field is tangible and elite. His leadership with National SAAC and his passion for representing his peers was truly inspiring. He is a difference maker in all aspects.”

ABOUT THE EMPIRE 8 CONFERENCE

The members of the Empire 8 Conference are committed first and foremost to the pursuit of academic excellence and the league is regarded as an outstanding NCAA Division III conference. The membership has distinguished itself among its peer group for its quality institutions, spirited and sportsmanlike competition, outstanding services and highly ethical policies and practices. Its commitment to serve the educational needs of its student-athletes is the hallmark of the E8. For more on the Empire 8 visit www.empire8.com.