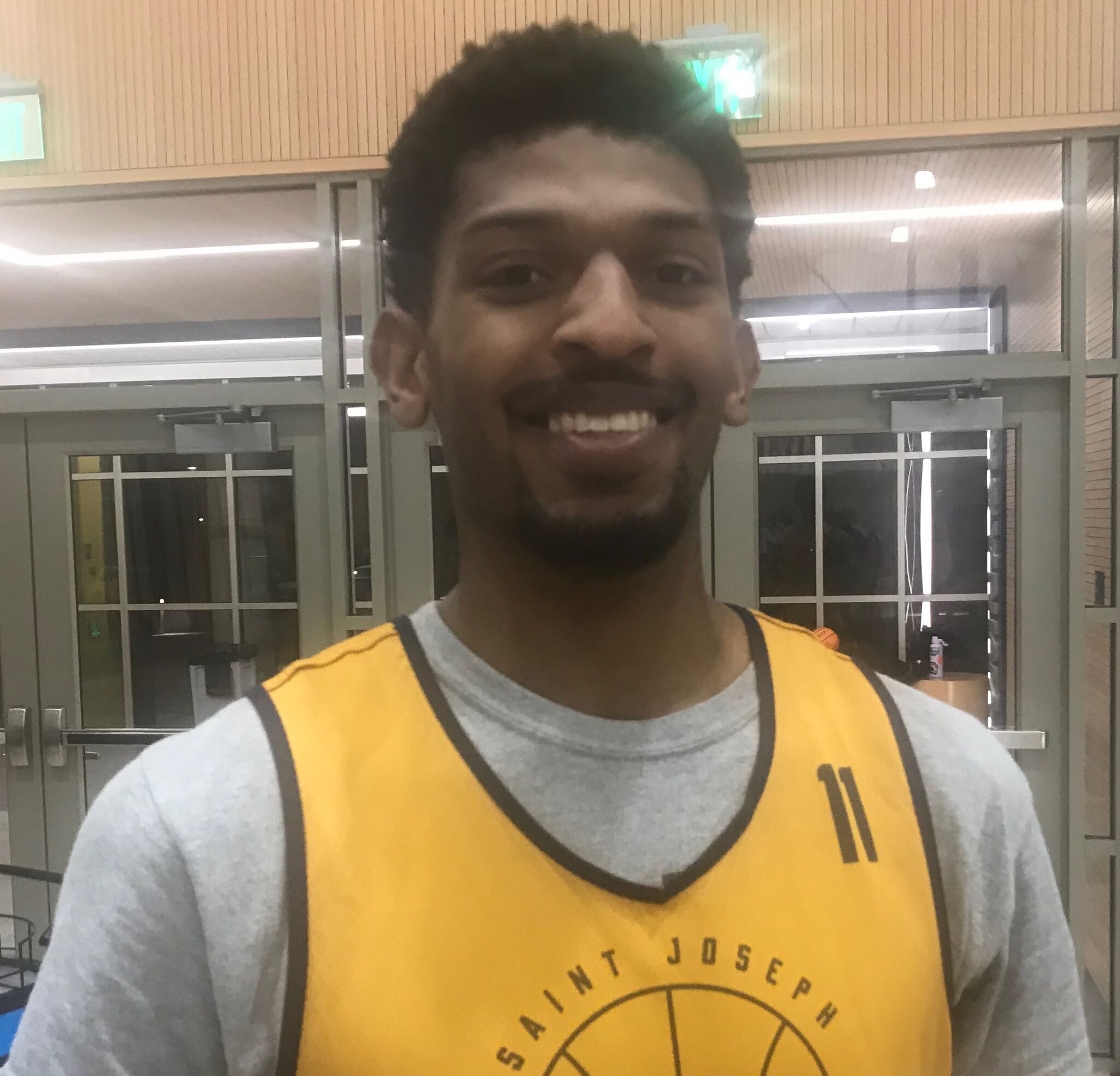 WEST HARTFORD — Alec Kinder hadn’t known Jim Calhoun was in the stands that night at Notre Dame-West Haven when he was playing against Wilbur Cross.

“After the game I saw all the kids running up to him and taking pictures,” Kinder said. “I looked over and went, ‘Oh, shoot, he’s here.’ All the kids at school were going crazy.”

That’s the way it started in the early months of 2018 after the Hall of Fame coach decided to come out of retirement to start a Division III men’s basketball program at St. Joseph, a previously all-women’s Catholic school.

Calhoun, who won three national titles at UConn, and Glen Miller, Kevin Ollie’s top assistant on a fourth, combed the state for talent, filled a roster with freshmen. And now five seasons later — including the COVID year that allowed an extra season of eligibility — six of those players remain.

“The young guys on the team call us dinosaurs,” Kinder said.

As the New Year hits, you can also call St. Joe’s the No. 1 team in the nation.

“Being No. 1 is definitely a validation,” Sullivan said. “I think for a long time we haven’t had that respect because we are a new program and, to be fair, we haven’t proven ourselves in the postseason.

“This year certainly we have beaten teams that have proven themselves in the postseason. I think we’ve shown we’re one of the best in the country.”

Sullivan played four years at Branford High before winning a NEPSAC Class A championship at Choate Rosemary Hall. O’Neill played three at Litchfield High before reclassifying and playing two at The Hotchkiss School.

Calhoun, who retired early last season and was succeeded by Miller, immediately saw Sullivan as a glue player and made him a captain halfway through his freshman year.

“I’m reserved and more of an introvert,” said Sullivan, who also gave serious consideration to Union, Clark and Brandeis. “My style is more to lead by example. It meant a lot that he believed in me and it motivated me.”

O’Neill went to see Calhoun in April of 2018. He had drawn interest from Pace and Southern Connecticut, Division II schools.

“It was late in the recruiting process,” O’Neill said. “My dad had known him. We talked for like six hours in his office, lots of stories.”

St. Joseph afforded him a place to play immediately. O’Neill led the Blue Jays with 25 points in the program’s first game victory over William Paterson. There was so much interest the game had to be moved to Trinity and an overflow crowd of nearly 2,000 people jammed the place.

O’Neill said he was a “random roommate” of Sullivan his freshman year. They had played against each other once. They would become close friends and evidence of student-athletic success.

Both majored in accounting for their bachelor degrees. Both are getting their master’s in management. Sullivan did an internship with PwC last summer and, studying for his CPA, will begin work there in auditing. O’Neill has lined up a position in auditing at KPMG in Hartford.

Kinder and Mitchell, meanwhile, had less auspicious beginnings. Kinder averaged 7.7. 5.2 and 4.9 minutes per game before this season. He was averaging around two points.

“Even though I wasn’t playing the coaching staff put an emphasis on players,” Kinder said. “Everybody is here to get better and work on their games. Also everyone from the top with President Free, to the admissions, to the teaching staff was always looking out for me and making sure I was doing good in school. I wanted to see what I could do here. If it worked out, it worked out. If it didn’t, it didn’t.”

Kinder is leading St. Joe’s with 7.3 rebounds to go with better than six points a game. He got his bachelor’s degree in sports management. He is getting his master’s in management.

“Alec stuck through it thick and thin,” Miller said. “Boy, has he grown in a short period of time. He has been terrific.”

As much as Calhoun served as a magnet for players, even he couldn’t have guaranteed they’d be leaving with master’s degrees. COVID did present its opportunities.

“Me and my mother laugh about it all the time,” Kinder said. “Coming here has made me a really good student.

“I love sports. Even if I ended up working for a hockey team, I would.”

Mitchell, who had been a teammate of Jackson’s at Prince Tech, didn’t play on the team as a freshman.

“I was working out with DJ in the gym here in the summer,” Mitchell said. “Calhoun saw me and asked about me. ‘Where does he go to school? Let’s try to get him here.’”

Mitchell, a 6-4 guard, has emerged to the point where he is second on the team in scoring at 12.5 behind only O’Neill’s 13.8. A senior majoring in social work, he’s looking to be a school social worker or work with DCF.

“My mom does foster care,” Mitchell said. “So these are things that have always intrigued me.”

The 5-9 Jackson hit St. Joe’s like a thunderbolt. As a freshman he averaged 16.6 points and was GNAC Rookie of the Year. As a sophomore he averaged 21.5, was All GNAC First Team and named MVP of the GNAC Tournament when he scored an electrifying 46 points in the 88-84 victory Albertus Magnus for the title.

“All the media around DJ after he had such a great game,” Sullivan said. “It was really cool. That picture is something I always remember.”

Jackson hurt his left foot his senior year at Prince Tech. He played through it his freshman season before surgery. COVID season — when St. Joe’s played four games — he hurt his right foot.

“Same thing. Surgery,” Jackson said. “I put on some weight. I’ve been working to get back to myself. I feel like I’m there now or very close.”

He appeared in only 11 games last season. This season Jackson has averaged better than seven points. A senior sports management major, he is interested in coaching. At Prince Tech, he gained certification in masonry, while Mitchell gained it plumbing.

“We’ve developed a family here,” Jackson said. “We can call each other at any time.”

Playing 12 guys, Miller has been able to employ fullcourt pressure, a fast break and a relentlessness that has shown up in a large scoring differential in the second half. Jaecee Martin leads the team at 27 minutes a game. Sullivan is the only other one above 23.5.

“They are similar in a lot of ways,” Mitchell said of Calhoun and Miller. “Their passion for the game is through the roof. If you don’t think you have an extra level, truly, they can get it out of you. Miller is more X’s and O’s. Calhoun is more tough love. The passion is similar.”

The first St. Joe’s team was 16-12, but got to the GNAC finals. Seasons of 26-3 season and 26-2 followed, but both ended with first-round NCAA losses to Hobart and Penn State-Harrisburg.

An early season November trip to Aberdeen, S.D., for the Small College Basketball Champions Classic should help there. Scheduled by Calhoun a few years ago, it brought victories over No. 3 Wisconsin-Oshkosh and No. 21 Illinois Wesleyan.

“We hadn’t proved we could consistently beat top teams in the country,” Miller said. “That was a barrier to overcome this year. Now, the guys know we can play with anybody.”

New gym. New turf fields. Dorm life. So many more guys on campus. Much has changed over five years at St. Joseph’s.

And now a No. 1 ranking. Miller’s 1999 Connecticut College team was ranked No. 1 before losing its only game in the Final Four.

“We are really happy to be No. 1, but we also know what comes with it,” Sullivan said. “We have to keep working like we have for five years and build on it. We’ve had a lot of success, but we get to the tournament and get stuck. We want to be ready for that moment when it comes.”

“This is the last ride for a lot of us,” O’Neill said. “We’ve got to make something special happen.”