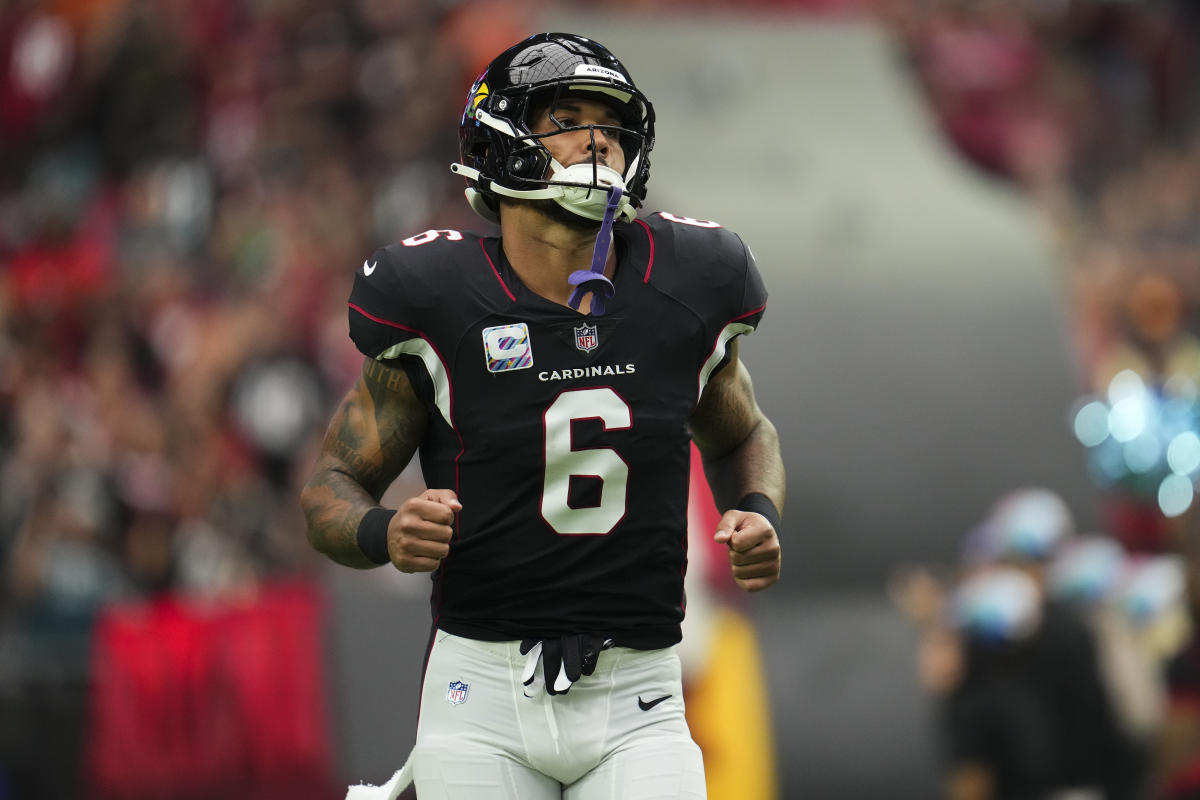 Fantasy football sit-and-start advice should always be relative and league-dependent. Note that some players are targeted for DFS. Good luck with your Week 12 lineups!

White looks poised to take over Tampa Bay’s backfield this week with Leonard Fournette both struggling and dealing with a hip injury. The rookie RB ran for 100+ yards against a solid Seattle defense before the Bucs’ bye, and he’s a plenty capable receiver who led college backs in yards per route run in 2021. White should be considered a top-15 RB this week (and top-10 if Fournette sits) facing a Browns run defense that ranks last both in EPA/rush and DVOA while ceding the second-most fantasy points to RBs.

Hunt has averaged just seven touches since Cleveland’s bye and has reached double-digit fantasy points in 0.5 PPR only once since Week 1. He gets a Tampa Bay defense this week that’s especially tough to run against when Akiem Hicks is healthy.

Andrews didn’t put up a big game but played a full allotment of snaps in his return to action last week. He should see 10+ targets weekly down the stretch with Baltimore’s extremely shaky WR group and unproductive running backs.

Andrews is set to be a fantasy difference maker now back healthy. His Week 12 DFS salary hasn’t been lower all season despite facing a Jacksonville defense allowing the most yards per play (6.3) in the NFL over the last three weeks.

Lawrence is getting just 6.7 YPA this season and faces a surging Baltimore defense this week. The Ravens have allowed a 2:3 TD:INT ratio over the last four games, so consider QB alternatives if possible.

Sit: All Texans but Dameon Pierce

It’s possible Kyle Allen is an upgrade over Davis Mills, but it’s tough to start any Houston pass catcher before we see it (and see whom he prefers to target). Pierce deserves a downgrade with the Texans big underdogs here (and Miami is better defending the run than pass), but he’s tough to sit in fantasy leagues given his workload.

Wilson acted as Miami’s lead back before the team’s bye and has benefitted greatly from the Dolphins’ weapons. He’s getting 6.1 YPC since joining Miami and faces a Houston defense allowing the most fantasy points and 150+ rush yards per game to running backs this season. Wilson should be considered a top-10 fantasy back in this matchup with the Dolphins two-touchdown home favorites and Raheem Mostert’s (knee) availability in serious doubt.

Sit: All Bears but David Montgomery

Trevor Siemian is likely starting for an injured Justin Fields on the road against one of the league’s best defenses. New York has allowed the third-fewest yards per play (4.7) at home this season, and the defense should benefit from better quarterback play. Montgomery can be started thanks to projected volume, but he gets a downgrade in a slow-paced matchup with a lowly 38.5-point total.

The switch from Zach Wilson (yikes! and yikes!) to Magic Mike White could also benefit Garrett Wilson as well as Elijah Moore. But Carter might get the biggest boost, as he saw a massive target percentage and averaged almost 20 PPR points when playing with White last season. The Jets’ three-headed backfield isn’t ideal, but James Robinson saw just a 22% snap share last week. Chicago’s defense is reeling and has been gashed for an NFL-high 18 rushing touchdowns this season, and game script should be favorable for New York given both teams’ QB changes this week.

The Titans have arguably the league’s best run defense and are yielding just 65.2 rush yards per game to running backs this season. But Perine is a capable receiver who was fantasy’s No. 2 RB last week and can be started with Joe Mixon already being ruled out.

Burks saw highly encouraging usage last week and continues to be more involved following Tennessee’s bye. The Titans have shaky alternatives at pass catcher and face a Bengals run defense that’s always tougher when DJ Reader is healthy, so Burks should be heavily involved in a game with sneaky shootout potential.

Volume remains an issue with Atlanta’s passing offense, but London is in the NFL top 15 in target share this season. He’s top-three in red-zone target share, and Kyle Pitts is now out. The Falcons get a pass-funnel Washington defense this week that ranks second against the run in DVOA, so the impressive rookie wideout could approach double-digit targets Sunday.

McLaurin’s target share has jumped from 16% with Carson Wentz to 32% with Taylor Heinicke. He faces an Atlanta defense allowing the second-most fantasy points to wide receivers this season while recording an NFL-low four QB hurries. Consider Scary Terry a top-10 fantasy WR this week.

Dulcich has been helpful at an ugly fantasy tight end position but his production has been greatly boosted by a couple of busted coverages. The rookie is also saddled with a Broncos offense averaging the fewest points per game and led by a quarterback who’s on pace to throw fewer touchdowns than the number of bathrooms in his house.

Russell Wilson has especially struggled when targeting TEs and RBs this season and has a league-worst TD% in the red zone. Panthers opponents have the sixth-lowest pass rate this season, and Sam Darnold is unlikely to produce many points against the Broncos defense. Dulcich’s projected usage should be way down this week in a matchup with a hideous 36.0-point total.

Foreman has definitely impressed at times since Christian McCaffrey was traded, but most of his production has come in two games against the Falcons. Foreman also saw just one-third of the snaps after the first quarter last week when Chuba Hubbard played more. This week the Panthers get a tough Broncos defense allowing the third-fewest yards per play and points per game this season. Denver opponents have the fourth-lowest run rate, and this matchup features one of the lowest under/unders (36.0) you’ll ever see in the NFL.

Carolina’s offense is in such trouble, they are WILLINGLY turning to Darnold. Depending on your alternatives, Foreman is a bench candidate this week.

Everett is back practicing fully and should return this week when he faces an Arizona defense allowing the most fantasy points to tight ends this season. In fact, only Travis Kelce has outscored tight ends facing the Cardinals in 2022. Justin Herbert has played better the further removed from his rib injury, and he’ll need Everett with Mike Williams aggravating his high-ankle injury last week.

Conner played 98% of the snaps before the fourth quarter got out of hand last week, and he should benefit from Kyler Murray’s likely return Sunday. Conner (and DeAndre Hopkins) should be extra busy with Rondale Moore and Greg Dortch both possibly out (joining Zach Ertz). Marquise Brown will be limited during his return if he’s even active. Conner can be considered a top-10 RB in a fast-paced matchup with the highest total (48 points) of the weekend.

Jacobs and Adams are featured heavily weekly, as Las Vegas’ touches are highly concentrated. But all other Raiders can be benched in a tough environment this week against a much-improved Seattle defense allowing the fifth-fewest yards per play over the last three weeks. The Seahawks have allowed the second-most fantasy points to tight ends this season, but that’s misleading, as a big portion of that came via Taysom Hill’s unique production (100+ rushing yards, three rush TDs, one pass TD).

Smith has thrown multiple touchdowns in seven of the past eight games and has the same YPA (7.8) as Josh Allen and Joe Burrow this season. He gets a home game Sunday against a Las Vegas defense that ranks among the bottom of the league in pressure rate and is allowing a better Passer Rating (106.3) than Patrick Mahomes’ career mark (106.0). Kenneth Walker is also in a smash spot in this fast-paced matchup with one of the highest totals (47.5) of the weekend.

The Rams were getting the fewest yards per play this season before Cooper Kupp went down. Undrafted rookie QB Bryce Perkins will be making his first career start Sunday behind an absolutely decimated offensive line. Allen Robinson and Tyler Higbee are battling injuries, while Cam Akers and Kyren Williams are splitting snaps. You can bench all Rams and treat the Chiefs D/ST as an elite fantasy start this week.

Pacheco has just three targets all season, and KC throws more than any team when inside the 10, but his fantasy arrow is pointing up anyway. Clyde Edwards-Helaire is on IR, and Jerick McKinnon lost a fumble last week. Pacheco has seen 15 carries in two straight games and should be looking at 20+ this week with KC massive 16-point favorites at home against a completely checked-out Rams team.

Game scripts don’t project much more favorable than Sunday’s, so I rank Pacheco as a top-15 RB this week.

Johnson has been the No. 5 fantasy tight end over the last five weeks when he’s pulled down five touchdowns. But those scores have come with just four targets in the red zone (two inside the 10) over that span, and this week he gets a 49ers defense that shuts down tight ends (only two have reached 30 yards against them all season).

San Francisco has been most vulnerable to the slot, so upgrade Jarvis Landry this week (and downgrade Alvin Kamara).

Garoppolo’s fantasy upside is limited thanks to a lack of volume and zero rushing ability, but he quietly has 13 touchdowns over the last six games. He’s gotten 8.2 YPA and has been a top-10 fantasy QB over that span since Week 4, and his slow start to the season can be easily explained by not practicing at all coming off shoulder surgery (with Trey Lance also expected to be the starter). The 49ers have one of the highest implied team totals (26.3 points) this week, so Jimmy G is once again worth starting in fantasy leagues thanks to his surroundings.

The Eagles bolstered their run defense with the additions of Ndamukong Suh and Linval Joseph and are near touchdown favorites, so Green Bay should be forced to throw plenty Sunday night. Lazard has taken a backseat to rookie Christian Watson over the last two weeks, but his usage remained incredibly encouraging. Lazard can be fired up in fantasy leagues this week despite a matchup against a tough Philadelphia secondary.

Sanders is coming off a couple of quiet games against tough run defenses but gets a much more favorable matchup Sunday night. Opponents have the third-highest run rate when facing the Packers, who rank 29th in DVOA against the run. Sanders is getting 5.0 YPC at home, should get more touches with Dallas Goedert sidelined and is primed for a big game Sunday night.

Freiermuth led all tight ends in air yards and target share last week and has seen terrific usage over two games since Chase Claypool was traded. He should be heavily involved Monday night against a Colts defense that ranks sixth against the run in DVOA and has also allowed the fewest fantasy points to wide receivers this season.

Conversely, the Steelers have been gashed for the most fantasy points, yards and touchdowns against wideouts this season. Campbell has been a top-12 fantasy WR in three of his past four games with Matt Ryan, while Alec Pierce reemerged last week while leading the Colts in targets and air yards. Pittman, Campbell and Pierce are all viable fantasy options in this matchup.