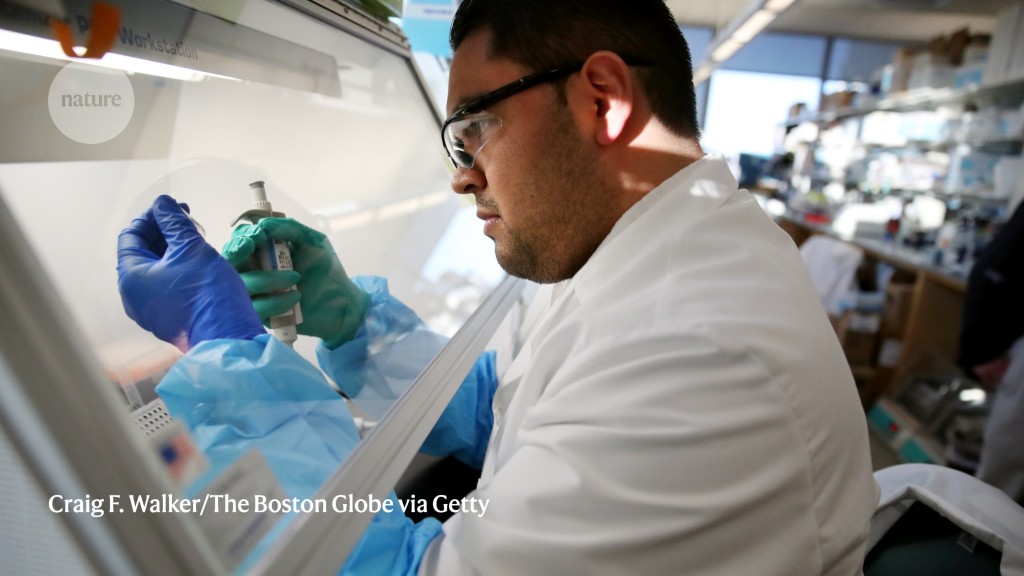 Although the COVID-19 pandemic isn’t over, the first victory in the fight against the virus came with the development of vaccines in record-breaking time. One of the first available was an mRNA vaccine developed by Moderna, a company based in Cambridge, Massachusetts, spun out of research by Harvard University biologist Derrick Rossi.

Moderna’s success was in large part down to its location, according to Noubar Afeyan who co-founded the company with Rossi, using funding from Afeyan’s venture-capital firm Flagship Pioneering. He told reporters in 2020 that the company was able to quickly attract hundreds of skilled local employees to ramp up production of the vaccine. “I don’t know where else you could do that,” said Afeyan. “Boston, Massachusetts, is, I would argue, the only place where this could have been developed.” 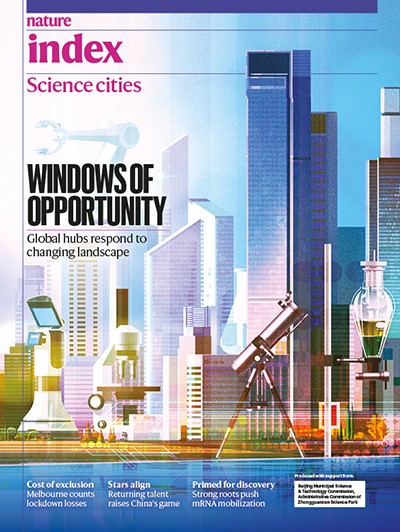 Indeed, the Boston Metropolitan Area has long been a hub of biology research. Boston is ranked by Nature Index as the second-leading city in the world for high-quality publications in the life sciences, after the New York Metropolitan Area and ahead of the San Francisco Bay Area in California, in third. The three are also among the leading five cities more generally, as measured by Share, a fractional count of affiliated authorship in papers, across all the natural-science disciplines covered by the index, with New York second, Boston fourth and San Francisco fifth. They share the spotlight with the Chinese cities of Beijing, the leading metropolis by Share, and Shanghai, which comes in third.

This leadership is due to several factors. For one, the US cities’ density of high-quality universities, institutions and hospitals mean a critical mass of researchers for collaboration, as well as access to a large, diverse patient population for clinical studies. All three also have substantial financial support from government and attract major investment from industry and private capital. And all are areas, with diverse populations and an attractive quality of life, where people are eager to live.

“Greater Boston is a hub for research and development for the entire world, and the COVID-19 pandemic really is shining a light on that,” says Joe Boncore, a former state senator and chief executive of the Massachusetts Biotechnology Council, or MassBio, a not-for-profit consortium based in Cambridge that promotes the life-sciences industry. “Three major COVID vaccine makers have a footprint here,” he says.

In addition to Moderna, American multinational Pfizer manufactured the other mRNA vaccine, developed with German biotechnology company BioNTech, at its plant in Andover, Massachusetts, among other locations around the world. And the Johnson & Johnson COVID-19 vaccine, which, rather than mRNA, uses a harmless virus as a carrier, grew out of the work of Dan Barouch, an immunologist at the Center for Virology and Vaccine Research at Harvard’s Beth Israel Deaconess Medical Center.

“One reason for the productivity and impact of biomedical research from Boston is the sheer number and high quality of research groups working in academia and industry in the greater Boston area. There are experts in many areas and a large scope of research questions being addressed,” Barouch says. “The development of a vaccine requires experts from both academia and industry in many domains, including virology, immunology, preclinical studies, clinical trials, manufacturing and regulatory affairs.”

Boston is not the only metropolitan area in the United States that demonstrates why having so many strong institutions in one place leads to high-quality research. “Proximity makes such a big difference,” says Carla Shatz, a neurobiologist who directs Bio-X, an interdisciplinary biosciences institute at Stanford University in California that provides support for life-sciences research. Stanford, which is the Nature Index’s leading institution in the San Francisco Bay Area for publication Share, has its campus close to Stanford Medical Center, making it easy for researchers and clinicians to meet and collaborate. Similarly, the University of California, San Francisco, has its own hospital, UCSF Medical Center, and is also closely tied to the San Francisco VA Medical Center.

New York and Boston have an even heavier concentration of world-leading hospitals. The New York State Department of Health lists 62 hospitals in the New York metropolitan area, including major clinical institutions such as NYU Langone Medical Center, part of New York University (NYU), and The Rockefeller University Hospital. Boston’s hospitals attract patients from all over the world, and many of them are teaching hospitals affiliated with Harvard, including the third-oldest hospital in the country, Massachusetts General Hospital, and Mass Eye and Ear, a renowned research centre dedicated to ophthalmology.

Stacie Bloom, a neurobiologist and vice-provost for research at NYU, says it is easy knitting together collaborations in such densely packed clusters of institutions. “Even if you’re going all the way from NYU in lower Manhattan, to Columbia University, in upper Manhattan, it’s still only 25 minutes of transportation. That’s a really big benefit.”

Not only does that proximity allow a type of casual and free-ranging interaction that’s just not available via virtual meeting platforms, it also allows researchers from different institutions to share expensive facilities. For instance, there’s the New York Structural Biology Center, founded in 1999 by The Rockefeller University, Columbia, NYU and six other local institutions to provide access to resources and equipment, from X-ray crystallography to antibody production. The New York Genome Center, founded in 2011 by 12 local institutions, similarly provides services to researchers in the area.

The San Francisco Bay Area, in addition to several universities, is also home to the Lawrence Berkeley and Lawrence Livermore national laboratories, and the SLAC National Accelerator Laboratory, all sponsored by the US Department of Energy, as well as NASA’s Ames Research Center. In addition to performing fundamental physics research, SLAC provides imaging services and helps biology researchers at Stanford develop new imaging instrumentation, according to Shatz.

Strong financial support for research is behind some of these successes. California, New York and Massachusetts were the top three recipients of grants from the US National Institutes of Health in fiscal year 2021, with $3.5 billion, $2.3 billion and $2 billion in funding, respectively. Federal research grants also come from the National Science Foundation and the departments of energy and defence. State and city authorities also play a role. Massachusetts launched the 10-year, $1-billion Life Sciences Initiative in 2008 to support local development of the biotech industry, followed a decade later by a five-year, $600-million extension. Boncore says MassBio will be lobbying the state government for a third round of funding to support workforce training for biotech jobs and the continued development of lab space and places to incubate university spin-offs.

In New York City, the mayor’s office is in the final stages of selecting a group of researchers to run the Center for Climate Solutions, to be built on Governor’s Island in New York Harbor. The city will provide up to $150 million in funding. Four short-listed proposals will be whittled down to one funded project. Each involves collaborations among institutions, which Bloom says is an important aspect of this type of research effort. In 2008, the city government launched a competition to attract an engineering school to the city, promising a $100-million investment and free land to host it on Roosevelt Island. The result was Cornell Tech, a collaboration between Cornell University, which is based in Ithaca in upstate New York, and Technion University in Haifa, Israel.

That kind of local government effort helps support engineering and physical sciences, says Nicholas Dirks, an anthropologist, and president of the New York Academy of sciences. Although all three US cities are among the leading ten cities for both physical sciences and chemistry, they lag behind cities in Asia. Beijing and Shanghai are ranked first and second in chemistry, respectively, with New York at number 7, San Francisco at 8 and Boston at 10. In physical sciences, Beijing and Shanghai are again 1 and 2, Boston is 3, New York is 4 and San Francisco is 5.

Although many efforts focus on supporting life sciences, there is general recognition that other areas are important as well, Dirks says. Stanford Bio-X, despite its main emphasis being biology, also supports adjacent research, such as biochemistry and data informatics. Bio-X , founded in 1998, runs an endowment that provides two-year, $125-million grants for high-risk research that has the potential for major breakthroughs, in the hope of advancing the work of university researchers to the point where they may be more competitive in seeking federal funding. Although some of those projects fail, over its history Bio-X has helped to garner ten times as much research funding as it has spent in its own grants, Shatz says. The project also leads to patents and spin-off companies, which benefit the area both by bringing royalty payments back to local universities, and by attracting students who see job opportunities, she says.

The San Francisco Bay Area, of course, is also home to Silicon Valley, a hub of technological innovation. The kind of venture capital pouring into the region in support of tech start-ups is attractive for young researchers who hope to turn their academic research into businesses, says Sean Randolph, an economist who manages the Bay Area Science and Innovation Consortium, an organization that promotes the economic impact of local scientific research. The University of California system has also established the California Institutes for Science and Innovation on its various campuses, which pools resources to encourage the relatively independent California system institutions to collaborate on research. “That’s also enabled them to develop quite strong collaborative research programmes with industry,” he says.

The place to be

Another factor that attracts and retains research talent is that these are locations where people want to live. There are cultural draws such as world-class museums and theatres, popular restaurants, renowned sports teams and a thriving night life, as well as access to stunning natural attractions such as beaches and mountains. Their diverse communities are also a significant attraction. Bloom points out that in New York, 200 different languages are spoken, more than one-third of the population were born abroad and there is a “really vibrant” LGBTQ+ community. “I think we attract talent because everyone is welcome here and everyone can find a community,” she says.

New York was not always such a great place to live, says Dirks. During the 1970s, the city was bankrupt, and the crime rate was high. This began to change in the 1990s, says Dirks, who joined the faculty of Columbia in 1997, and was dean of the Faculty of Arts and Sciences from 2004 until 2012, a period when he says it became notably easier to attract new faculty members.

“I saw just a huge take-off in the vibrancy in New York around work in the life sciences. And of course, even more recently, New York has seen a real growth in tech and physical-sciences research around the tech sector,” Dirks says.

The downside is that high demand and tight space has driven up the cost of living in New York and the other science cities in the United States. For instance, in June, property website realtor.com listed the median price of a house in San Francisco as $1.3 million. Data also suggest that the average salary for a scientist in New York, Boston and San Francisco is lower than GDP per capita for each city. “That really makes it hard for anybody, including well-paid tech workers, to live here,” Randolph says. With many scientists being at their most productive at relatively young ages, when their income is also at its lowest, this could present a threat to these leading US cities in attracting talent.