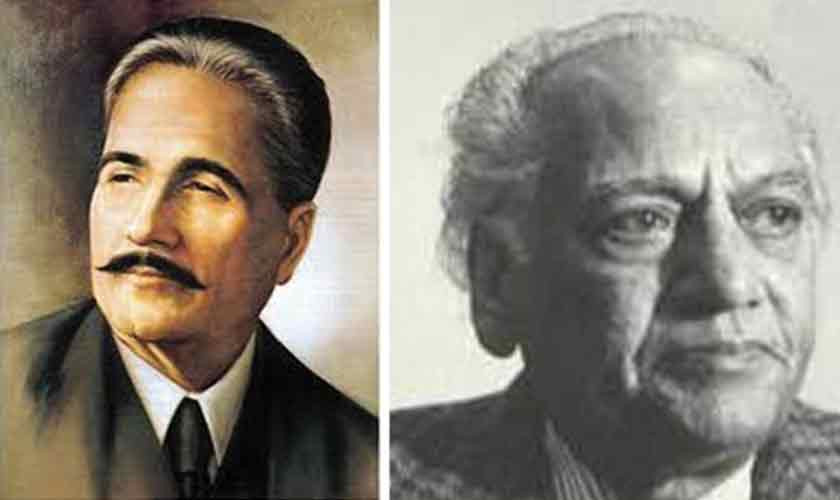 ost of the focus on the remembrance surrounding Faiz Ahmed Faiz has shifted to his birth anniversary.However, precious little is done to also mark his death anniversary, which falls on November 20.

Recently, the holiday on the birth anniversary of Iqbal was restored after being dropped from the list yearsearlier.

Both Iqbal and Faiz were born in the then Sialkot district –Iqbal in the town and Faiz in Kala Kader, a village that now falls in the newly-created Narowal district, carved from the erstwhile Sialkot district.

Iqbal has been widely sung.Due to the preponderance of ghazal in Faiz,his numbers have been composed and sung by the leading vocalist of the country. Mehdi Hassan’sguloan main rung bharay baad-i-nao bahar chalay was a landmark number that also changed the way the ghazalwas rendered.

The other two landmark renditions have been of the nazms by Noor Jehan and Iqbal Bano. Noor Jehanmujh say pehli si muhabbat meray mehboob na mang became aninstant success after it was sung and made a part of a film. Composed by Rasheed Attre, it set a new standard and bench mark for singing the nazm.She sang other nazms of Faizas well which are very well intoned but the popularity that she achieved by singing mujh say palhli si mohabbat remained unparalleled. She also sang some of the ghazalsby Faiz and these are all very well-remembered for their musical credentials.

Iqbal Bano’sdasht-i-tanhaieye main ae Jan-i-jehanlarzanhain, composed by Mehdi Zaheer, was truly a masterpiece.It set the bar for singing the nazm higher. It is the poet who writes.So,he has to be a poet first and a believer later. The poet has to have the genius for poetry and only then can the thought, the idea or the ideology be transformed into a nazmor a verse or a line.The case with the vocalists is no different.Many in their zeal for the ideologyhave sung the lyrics but fall far short of the full musical impact.

The next question is whether it is the poet or the vocalist who has the ability to bridge the gap. They may appear to be two strains, but actually, in the creative process of the poet and the vocalist, the two become one to flow in a single unified stream. The two in its unified form have the ability to create the raw material. It is with the vocalist that the two streams meld into one as to evocatively express it.

It is the genius of the vocalistembedded in the genius of the composer that the word and the note become one. If they do not, then the two strains will be separately identifiable to the detriment of both. The sur and the lafz will grapple and vie with each other rather than be one. If the two are going or appearto be going their separate ways, then it will be a labour without love.

Iqbal has been sung but the spirit of his verses has not really been captured by many vocalists or composers. The reasons could be many primarily because the declamatory tone of his verses is not in synch with the supplication, seduction and the humility which is the signature tune of our mainstream poetry. The beloved has to be wooed and cajoled, has to be sought and the sternness of the tone is off putting and perhaps not in consonance with the temperament of the poetical tradition. Perhaps, it would be easier to set a martial tone to his verses.That could be good for a march but not a melody-yearning fulfilment.

The writer is a culture critic based in Lahore