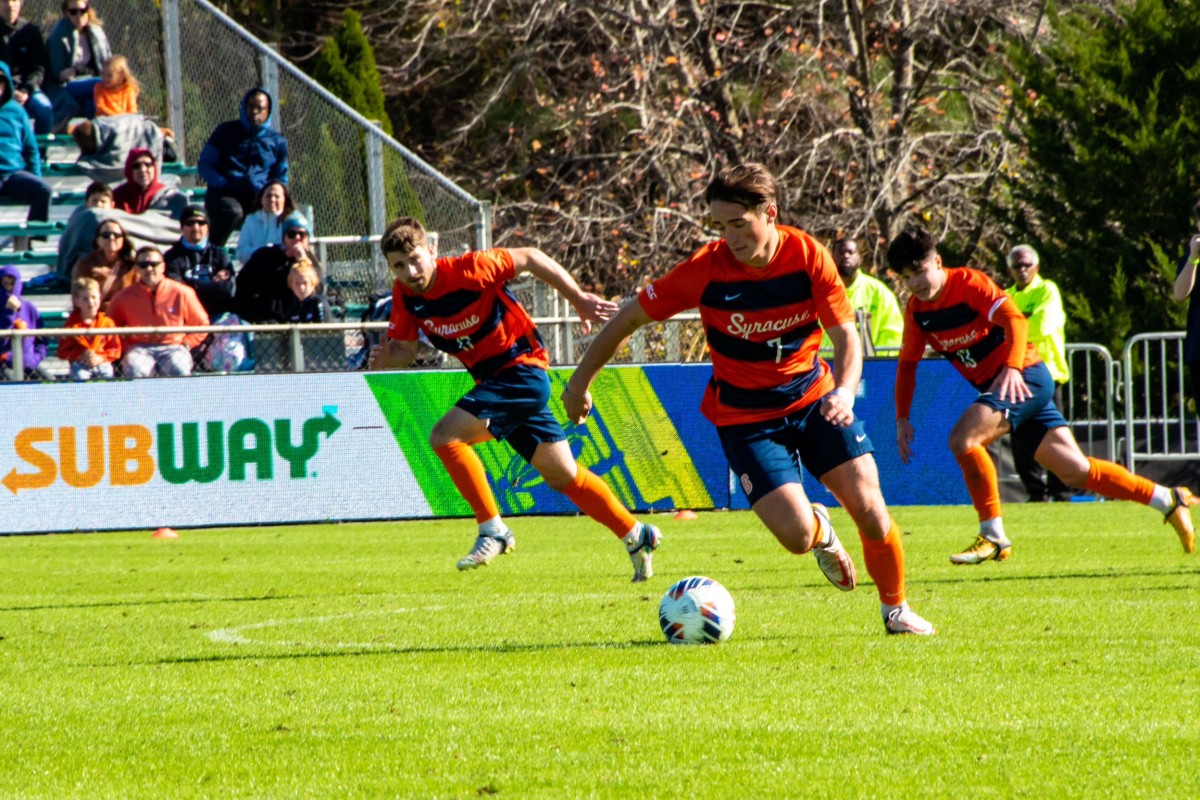 Syracuse is into round 3 of the NCAA Tournament but not without a scare from UPenn. The Quakers keep their players back in the first half and allowed the Orange to control possession and the majority of the chances. Part of this was because Penn wanted to play longer balls to their two talented goal scorers in Ben Stitz and Stas Korzeniowski. The high risk, high reward defensive strategy Syracuse went with was to play with a high backline which allowed them to both maintain pressure further up the pitch as well as make timing those runs difficult. The Quakers would finish with 12 offsides in the game which Coach Gill was far from disappointed with because it meant his team was trying to be aggressive by making those runs.

The first goal of the game came seven minutes into the 2nd half, and it opened up the entire game. Ben Do took the corner and Nick Schimbeno finished it off to put them up 1-0. After that goal it would be chances galore including Nathan Opoku’s answer in the 60th minute, eight minutes after the opening goal. Jeorgio Kocevski played a ball into Opoku who finished with power to level it. Despite putting up 18 shots in regulation, the Orange would need just one minute of extra time to make take the lead. Giona Leibold beat a few defenders, before getting enough space to swing a ball into Levonte Johnson who put home the winner. It didn’t come without another important, last minute save from Russell Shealy to prevent penalties.

Not every seeded team had the same fortunate outcome as the Orange as 7 of the 16 seeded programs were upset. Pittsburgh (3-0), Portland (2-0) and Western Michigan (1-0) all managed clean sheets against their seeded competition which leaves #1 Kentucky as the only one left in that quadrant. #5 Stanford dominated 6-2 while #12 UNC Greensboro needed penalties to keep their season alive against the Buckeyes. Marshall took UVA to penalties and upset the #4 seed in the tournament and will now take on #13 Indiana. The only upset in the bottom right of the bracket was the biggest one as #2 Washington, who hadn’t lost their first game of the season until November 10th, were outmatched by Creighton and the nation’s leading scorer Duncan McGuire. In Syracuse’s corner of the bracket UCLA defeated 6-seeded Clemson despite their 23rd minute lead. Vermont, another team the Orange have seen this season, upset #11 SMU while #14 Cornell held off Maryland in a game that saw all 3 goals scored in less than a 4 minute span.

Syracuse now get a rematch with Cornell who delivered Syracuse their 2nd loss of the season. It was a Tuesday night non-conference game that got the best of the Orange who had an own goal and conceded a penalty. Opoku scored a penalty of his own by in the 90th minute which was all but too late. This was another one of those games that, much like Virginia, had its flow interrupted by a quick and constant whistle. 40 total fouls, 25 of which were against Cornell, saw a game that was very stop and go and had very little chance for build-up play. Syracuse outshot Cornell 17-9, but much like the other facets of this contest, the Orange could have gotten a better result if they had been a bit more clinical and had the opportunity to just let the game flow. With a week to prepare this time as well as hopefully a lighter whistle Syracuse should have the upper hand. The Orange get their 2nd matchup in a row against an Ivy League foe. UPenn beat Cornell in their one matchup 3-2, a game which ended up deciding the winner of the Ivy League.

When looking at the other 3rd round matchups you can’t go wrong. At this point every single contest is going to feature the countries very best. Aside from the obvious Syracuse vs Cornell there are two other matches that I’m keeping an eye on. The first on that list is Marshall and #13 Indiana. I have liked this Marshall squad all season and they proved their quality yet against Virginia. This team beat Pitt when they were ranked #2, drew with #1 Kentucky and likely would have been a seeded team had they not lost to James Madison in the Sun Belt tournament. I think Marshall has a legitimate chance to advance to the quarterfinals and arguably should be favored over Indiana. The Hoosiers finished 3-1-4 in conference but do have a 8-1-3 home record. It won’t come easy to go into Indiana to get a win, but I do like Marshall’s chances. The other matchup I like features that Pitt squad. Kentucky is undefeated and the only remaining team to have that title for a reason, but Pitt has been one of those teams that has always had a little bit more than they’ve shown this season for me. They should have beaten UVA in the ACC tournament and struggled in the middle to the end of the regular season to secure results. The quality is surely there with Valentin Noel and Bertin Jacquesson leading the offensive charge with their facilitator in Filip Mirkovic who has 12 assists. This is a team that has the talent to keep pace with the 3rd highest scoring team in the nation as well as the one with the best goal differential. While the odds should still be on Kentucky, I do expect this to be a close game and a result that the Panthers could steal.