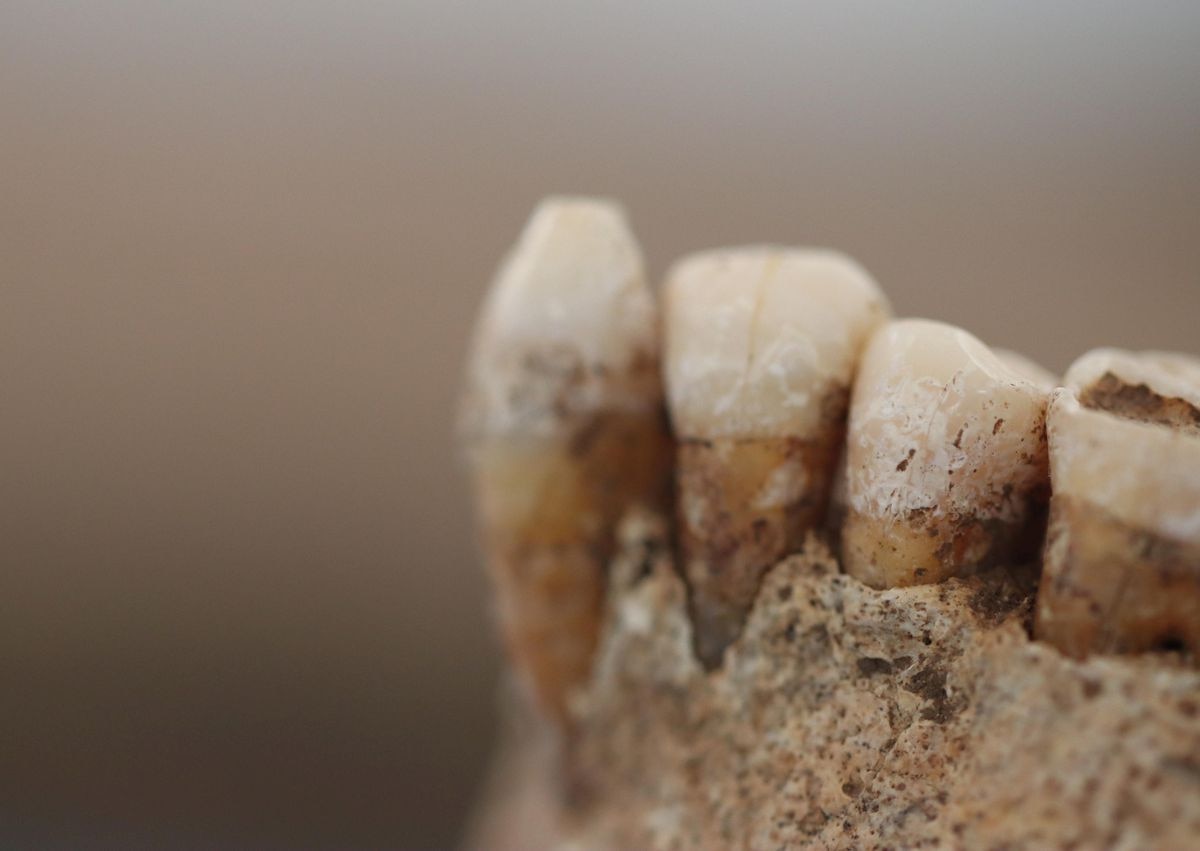 Tartar deposits on the teeth of humans who lived thousands of years ago are providing insights into what they ate, the type of bacteria in their mouths and their overall oral health. Italian researchers have collected dozens of teeth from a key period of prehistory: the transition from nomadic, Paleolithic hunter-gatherers to Neolithic farmers who built the first organized settlements and set the stage for the rest of human history. The teeth enabled them to observe how the oral microbiome changed as Neolithic peoples migrated westward and brought agrarian technology and domesticated animals.

Tartar is nothing more than calcified dental plaque, and plaque is a thin film of bacteria (biofilm) made from leftover food particles and saliva that mix in your mouth. Many are symbionts that aid food digestion, while others are pathogenic. They can be beneficial or harmful depending on their size and environmental conditions. Scientific advances in genetics have enabled the identification of these microorganisms in ancient human remains, especially in the teeth where the largest and best preserved accumulations are found. As any paleontologist will tell you, teeth withstand the ravages of time better than any other part of the human body. Some hominid species have been identified from a single unearthed tooth.

A group of Italian scientists has assembled one of the world’s largest collections of ancient human teeth. They have 76 dental samples, some dating as far back as 31,000 years ago, in the middle of the Upper Paleolithic period, when glaciers still covered most of Europe. Some of their more recent teeth are from the Copper Age, about 3,000 years ago, just a few centuries before the date of the mythical origins of Rome. But most of the teeth are from different phases of the Neolithic period. The great revolution in human history began with the Holocene period when the last remaining glaciers retreated from the Near East about 11,000 years ago. The various groups of people arriving in Europe over the next millennia brought agriculture, livestock, stable villages, social hierarchies and more.

The first people migrating from the east arrived in southern Italy about 8,000 years ago. Almost all the teeth analyzed in this study come from that area. The study objective was to analyze how the oral microbiome in one location evolved over time. It’s a research field called metagenomics, which is the study of microbial communities in specific environments – in this case, the mouth. Published in Nature Communications, the study identified 49 different species, the vast majority of which were bacteria, and other microorganisms like archaea and diatoms. Considering that more than 1,000 species can colonize our mouths, 49 doesn’t seem too impressive. But these mouths are between 3,000 and 31,000 years old.

University of Padua (Italy) scientist Andrea Quagliariello, a co-author of the study, said, “We observed two different changes [in the human microbiome], especially when hunter-gatherer nomads transitioned to the first farming settlements. These changes followed two distinct trends. One was the decline of a [microbial] species prevalent among hunter-gatherers that began with the onset of the Neolithic period. The other was an opposite trend – certain species rarely found among hunters increased a great deal at the onset of the transition.” Those that increased belonged to red and orange complexes, and eventually became predominant. Dentists and microbiologists classify oral bacteria into color groups. Some are familiar-sounding names like the red Porphyromonas gingivalis and Treponema denticola, and the orange Campylobacter and Prevotella intermedia. The microorganisms that slowly disappeared from the mouths of the ancient humans belonged to the purple complex (Actinomyces spp.) and several streptococci from the yellow group.

By studying how the oral microbiome changed over time, the scientists were able to identify dietary shifts. Similar to intestinal microbiota, symbiont bacteria in the mouth metabolize food, but each group of species metabolizes different nutrients and uses different chemical pathways. “Paleolithic and Neolithic samples were characterized by different carbohydrate pathways,” said Quagliariello. For example, the samples from Paleolithic hunter-gatherers were all enriched by a wild, plant-based starch metabolism, whereas the Neolithic samples revealed a galactose metabolism, which is a byproduct of animal milk lactose. “These differences are probably related to differences in their dietary resources,” said Quagliariello. In fact, microscopic analyses enabled them to detect plant residue (bits of seeds and roots) in the tartar of hunter-gatherers that was different from the residue found on the Neolithic teeth. “This can be explained by their adoption of different carbohydrate sources. In fact, the tartar on the hunter-gatherer samples were particularly rich in starch residue and the species involved in starch metabolism,” he said.

Although it was not the primary objective of the study, the differences in the oral microbiome led to another conclusion: the Paleolithic people had the healthiest teeth. The Neolithic bacteria revealed an increase in viral infections over time, which means the new bacteria had greater motility, were better able to evade the immune system, and had better anti-phagocytosis mechanisms (a cellular mechanism to combat foreign agents). They also had a greater capacity to generate endotoxins. The published study states, “The oral ecosystems of the Late Neolithic (LN) and Copper Age (CA) populations suffered a worse state of health than those of their recent ancestors. In this frame, it is noteworthy that anthropological analyses, mainly retrieved from published articles, reported that most of the considered samples for LN and CA periods were characterized by a higher incidence of oral diseases. Conversely, the Paleolithic samples demonstrated good oral health conditions, while the early and mid-Neolithic samples accounted for a low incidence of periodontitis and caries.”

The teeth of Neolithic humans are full of little holes – cavities

Miriam Cubas, a researcher at the University of Alcalá de Henares (Spain) is very familiar with the oral health of these ancient peoples. “The teeth of Neolithic humans are full of little holes – cavities,” she said. Although she didn’t participate in the Italian study, Cubas has researched the same Paleolithic-Neolithic transition in the Iberian Peninsula and the corresponding dietary shifts. She applied the very different, but equally fascinating methodology of tartar metagenomics. “The presence of two different isotopes in the bones [carbon-13 and nitrogen-15] enabled us to identify what they ate,” said Cubas.

While she was with the University of York (UK) in 2018, Cubas led a project to study the bones of nearly 800 humans who mostly lived on the Mediterranean and Cantabrian coasts (Northern Spain), two regions of the Iberian Peninsula at opposite ends of the ecological and climatic spectrum. “During the Paleolithic period, nomadic groups depended on whatever was available. Their primary protein source was meat from terrestrial animals,” she said. But as the glaciers disappeared, the megafauna also disappeared, and sea levels rose. “Mesolithic [pre-Neolithic] humans supplemented their diet with animal proteins, but also started consuming marine protein. So when we talk about the Paleolithic diet, we have to remember that there were several Paleolithic diets,” said Cubas.

Like Italy, the big changes to life on the Iberian Peninsula came from the east about 8,000 years ago. “The people migrating from the east settled along on the Mediterranean coast and brought agriculture and livestock,” said Cubas. The isotope ratios in their bones show that they stopped eating fish or at least started consuming more grain and milk from domesticated animals. It took another 1,000 years for the Neolithic diet to spread all the way to the Cantabrian coast, but it’s not clear in Italy or in Spain whether that transition was due to the assimilation of the last nomadic hunters into an agricultural lifestyle, or whether the Paleolithic people simply disappeared.