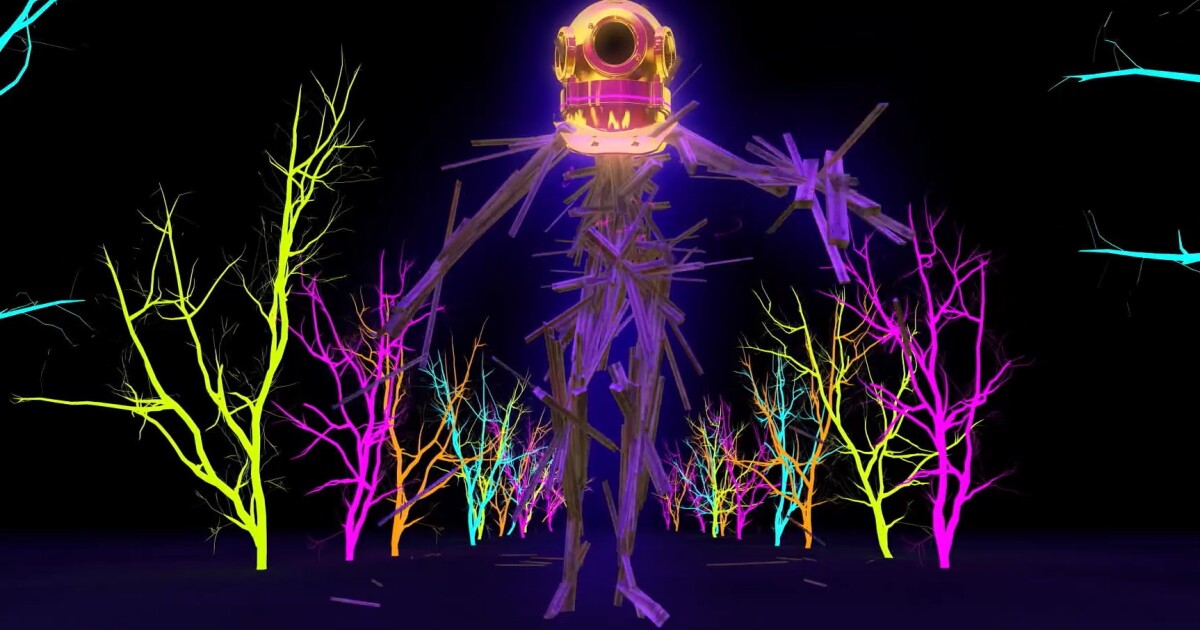 Three KERA arts reporters — Galilee Abdullah, Elizabeth Myong and Jerome Weeks — have combed through the new year’s cultural events to offer this sampling of art, music, theater and fascinating strangeness that they’re interested in checking out in 2023.

An epic love story with a cast of nearly 500 handmade shadow puppets — plus actors, puppeteers and projected animations — “Song of the North” is a multi-media experience. It follows Manijeh, a heroine from the ancient Persian Empire (modern-day Iran) who must rescue her lover, Bijan, the son of a Persian enemy — and along the way, stop a war.

Hamid Marahnian is an award-winning visual artist and filmmaker who’s worked on such Disney projects as “Tarzan.” “Song of the North” is taken from “Shahnameh” (“The Book of Kings”), a 10th-century epic poem, and Marahnian has spent years adapting it for Western audiences — both in print and on stage. He had the poem newly translated into a 600-page illustrated book that the “Wall Street Journal” called “a masterpiece.”

The 80-minute-long, cinematic fusion of movement, shadows and music is making its Texas premiere in Dallas, courtesy of TITAS — after being seen in Paris and New York.

“New York Times” journalist Nikole Hannah-Jones’ “1619 Project” argued that slavery wasn’t an aberration or some temporary deal with the devil that the United States made. It was and remains central to American identity.

Her work won a Pulitzer — and restarted the ongoing argument over how slavery is taught in schools. In February, the project comes to Bishop Arts Theatre Center in Dallas as a one-act play festival; nine plays based on “The 1969 Project,” commissioned from local and national playwrights.

Teresa Coleman Wash, founding artistic director of the theater, said the festival “will be a gathering, a meditation, an outcry, an intervention, a coming together to witness and dream what America was, is and can be.”

Mara Richards Bim established Cry Havoc in 2014 as a self-generating, ‘investigative’ teen theater company. High schoolers from around Dallas researched topics of pressing interest to them — immigration, gun violence, digital technology — and then devised an original stage work from their interviews. Perhaps best known for “Babel,” which Art&Seek covered in the podcast, “Gun Play,” Cry Havoc earned national and local attention as well as awards.

But Richards Bim had never planned on running a theater company for years. She announced last December she and her family are moving out of state. So Cry Havoc is reviving the appropriately titled “Endlings.” Originally part of the 2020 season, the drama is about the arguments and griefs caused by climate change. But because of COVID, the original show was turned into a radio production.

“I’ll Be Your Mirror: Art and the Digital Age,” Modern Art Museum of Fort Worth, Feb. 12-April 30

A landmark survey of more than 60 artworks, “I’ll Be Your Mirror” takes on the cultural impact of the digital screen across the past five decades. As artworks, screens themselves are flat, like traditional paintings, but unlike previous media, they can bombard us with infinite space and infinite images — while handing over our own data to whatever source has the means to acquire it.

The Modern Art Museum’s “I’ll Be Your Mirror” doesn’t simply offer videos, games and augmented reality by pioneers in the televisual form, such as Nam June Paik, Andy Warhol and Arthur Jafa (above). There are also paintings and sculptures — as well as digital works by such area artists as Liss Lafleur and John Pomara — plus unconventional contemporary outfits like the Electronic Disturbance Theater 2.0, a collective of performance artists and cyber activists.

“I’ll Be Your Mirror” (the title comes from the Velvet Underground song) touches on surveillance, “the posthuman body,” connectivity and loneliness. That’s because television and its descendants — the home computer and the cellphone — have provided us instant, broadband access. And a deepening isolation.

Singer/songwriter Durand Bernarr released his sophomore album “Wanderlust” in 2022. This year, he takes the new album on the road. The R&B musician was formerly a background vocalist for Erykah Badu and has also collaborated with artists like Ari Lennox, Kaytranada, The Internet, and Knxwledge.

“Wanderlust” features 12 “self-reflective” songs, and Bernarr told GRAMMY.com, “The album takes you on a myriad of different genres from African funk to ‘80s video games, where I tap into my Sault bag — I love me some Cleo Sol — to New Orleans church vibes.”

The Wanderlust tour stops in Dallas at the House of Blues, March 11.
— Galilee Abdullah

Scheduled for the 160th anniversary of the Emancipation Proclamation — which declared “all persons held as slaves” in the Confederate states “henceforward shall be free” — this Amon Carter exhibition includes recent and freshly commissioned works by, among others, installation artist Sadie Barnette, Fort Worth’s Letitia Huckaby, Dallas wood sculptor Hugh Hayden and the Haitian-born, multi-disciplinary artist Jeffrey Meris.

The exhibition will be made of seven installations, all made in response to the 1863 bronze sculpture, “The Freedman,” by John Quincy Adams Ward. The work is in the Amon Carter’s collection: It’s the image of a seated Black man, holding his opened shackles.

R&B singer SZA has been topping the charts in recent weeks and received rave reviews for her performance on “SNL” in December. Now, North Texans can look forward to the singer’s upcoming stop in Dallas on her SOS. tour.

The singer and songwriter has held the top spot on the Billboard 200 with her second album SOS for three weeks straight. As Rolling Stone describes her, SZA is the “cool girl with a Trapper Keeper full of receipts on everyone. She’s the queen of revenge fantasy…”

In addition to her popular music, fans can enjoy the artist’s imaginative and visually-engaging music videos like “Shirt” which features actor Lakeith Stanfield.

Wear your cat eyeliner and bring all the feels. Taylor Swift is performing three nights at the AT&T Stadium in Arlington – one of the 20 stadiums on her highly-anticipated Eras Tour.in the U.S.

It’s an understatement to say Swifties are excited. There was November’s ticket sale mayhem, when TicketMaster’s website crashed as millions of fans tried to secure tickets. Some devotees waited for hours and days to no avail. Now, dozens of them are suing TicketMaster.

The Eras Tour will promote Swift’s 10th album Midnights, and look back at her past albums – which include Lover, Folklore and Evermore — which she hasn’t performed on tour. Fans are eagerly anticipating Swift’s setlist and some are even dreaming up their own.

North Texas Swifties can look forward to three concerts at Arlington’s AT&T Stadium: March 31 will feature MUNA and GAYLE, and April 1 and 2 will include beabadoobee and Gracie Abrams.

“A Night at the Ballet: Brian Raphael Nabors, Humperdinck, Griffes, Ravel, and Stravinsky,” with the Fort Worth Symphony and Texas Ballet Theater, Bass Hall, April 21-23

Texas Ballet Theater and the Fort Worth Symphony Orchestra are collaborating on a joint program that includes such dance highlights as Stravinsky’s Suite from “The Firebird” and Griffes’ “Pleasure Dome of Kubla Kahn.”

But the program will also include the world premiere of the newest work by composer Brian Raphael Nabors: “Of Earth & Sky: Tales from the Motherland.” Commissioned by the FWSO, the 20-minute work takes the listener to the African continent through three legends — including that of Anansi, the trickster spider — plus a celebratory finale.

Originally from Alabama, Nabors is returning to the FWSO after his “Pulse for Orchestra” was performed at Bass Hall in September 2021.

A Night at the Ballet: Brian Raphael Nabors, Humperdinck, Griffes, Ravel, and Stravinsky, presented by the Fort Worth Symphony at Bass Hall, April 21-23.
—Galilee Abdullah

Originally from Rogers, Texas, Alvin Ailey has been hailed as one the most important choreographers, ever. Founded nearly 65 years ago, Alvin Ailey American Dance Theater is “one of the first professional companies where dancers of all races and backgrounds were welcome,” says the Kennedy Center

Today, the company is one of the nation’s leading dance troupes — in fact, “The New York Times” has declared it “possibly the most successful modern dance company on the planet.” Now led by artistic director Robert Battle, the company is being brought back to Dallas by TITAS, as part of its 2022-’23 season— for three performances.

Meow Wolf is a Santa-Fe based, immersive-art company known for its otherworldly rethinking of art and art spaces with locations in Santa Fe, Denver and Las Vegas. This year, visitors who drop by the Grapevine Mills mall will encounter the outfit’s fourth permanent installation. Another one’s planned for Houston in 2024.

In the exhibition’s 29,000 square feet and 30 rooms, viewers can expect everything from “alien topography to figurative metaphors of race, culture and gender.” They can also expect works by more than 40 artists, half of them from Texas – including Dallas-based artist Dan Lam, whose vibrantly-colored, drippy sculptures have become popular on TikTok and Instagram. Other featured North Texas artists include Ryan Chen, Carlos Donjuan and Adam Palmer.
—Elizabeth Myong

Other noteworthy arts events ahead in 2023:

January 28: “An African-American Requiem,” composed by Damien Geter, presented by the Fort Worth Opera, Van Cliburn Concert Hall at TCU.