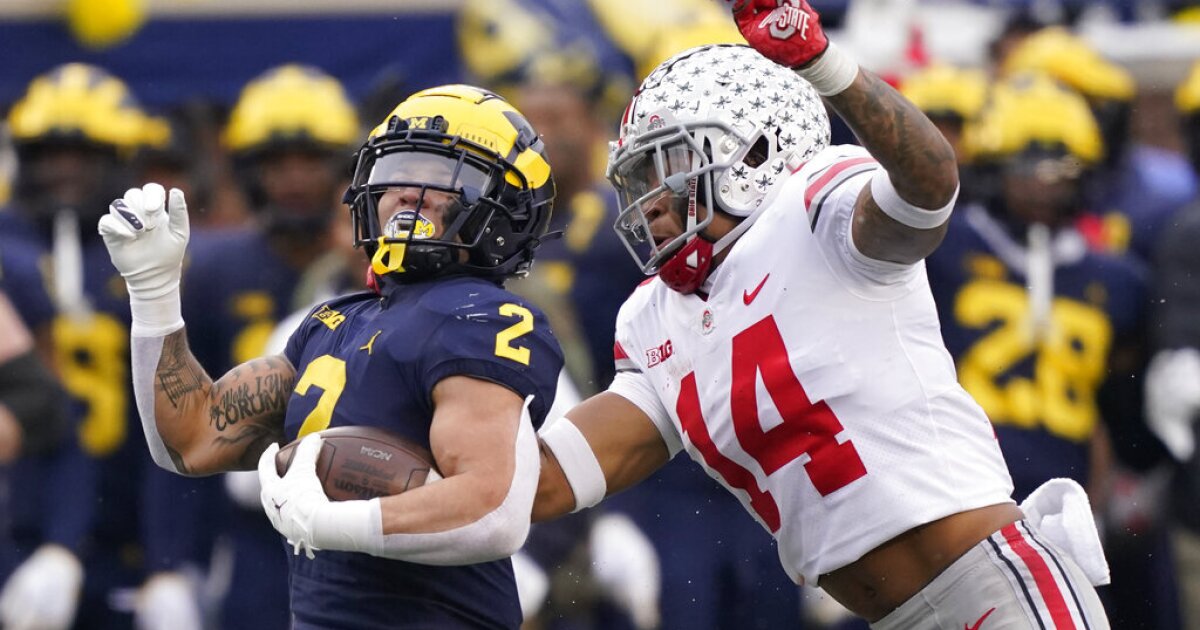 On Saturday, Michigan and Ohio State will play their annual rivalry football game in Columbus. For the second straight year, the game has big implications for both teams’ championship hopes.

Last year at this time, Ben Mathis-Lilley was feeling some serious nervous energy. Mathis-Lilley is a senior writer for Slate. He is also the author of the new book, The Hot Seat: A year of Outrage, Pride, and Occasional Games of College Football.

“I think I feel just as bad and just as nervous this year, despite the victory last year,” Mathis-Lilley told Michigan Radio’s Morning Edition.

The pessimism of hope

For his book, Mathis-Lilley tracked Michigan football during the 2021 season, but the book is also a study of the mindset of fans, himself included. In the second game, Michigan beat Washington 31-10. Mathis-Lilley reprints a string of real-time comments posted to a couple of blogs during and after that win.

If you didn’t know the outcome, the comments would make you think Michigan lost badly. One fan even wrote that win was going to somehow hurt the Michigan football program in the long run.

Lilley thinks he knows how some fans can be so pessimistic even when their team is doing well.

“It was funny because I had just read an older article about what happens to people when they are the victims of a con artist and how they rearrange their ego to explain to themselves what happened to them. And I felt like it was kind of the same thing happening in the football game,” Lilley said.

“The idea that Michigan was going to be a good team this year was something that they had really convinced themselves of. It was like they were already trying to figure out a way that their ego and their identity could get through this whole experience of losing without implying too much about them personally or without creating a psychological problem for them. It was like they were almost hedging in advance, so that if they actually did lose, they could say, ‘I didn’t care about that.’ But obviously they really wanted to win very badly and that was what was causing it.”

Wolverines supporters have a bit of a reputation for seeing their team as a glass half-empty.

“I think that Michigan fans, because of the history of the team, having been a really good team for a long time and then having gone through a couple of decades of struggle, [that feeling] may be heightened for them, especially right now, when they kind of expect that as soon as anything good happens, they’re waiting for the other shoe to drop,” Lilley said.

But, according to Mathis-Lilley, they’re not alone.

“The kind of the amazing and horrible thing about college football is really every other group of fans probably feels this way on some level. I think somewhere between like 15 and 20 teams, their fans think that every year they should be winning the national championship or coming very close,” Lilley said.

“15 teams can’t win the National Championship every year, so it’s a lot of anxiety and a lot of disappointment. And it’s almost like they set up the game [of college football] just to make people feel that way.”

A speck in the maelstrom

The book is called The Hot Seat because Michigan coach Jim Harbaugh was on that seat last season. He had yet to beat Ohio State or claim a Big Ten title, so when Michigan lost to Michigan State, Wolverines fans were very frustrated.

Mathis-Lilley was at that game in Spartan Stadium in East Lansing. As MSU closed out its victory, he looked down at Harbaugh on the sideline. He writes that Harbaugh, the face of Michigan football, was a “speck in the maelstrom.” Later in that chapter, Mathis-Lilley sums up the scene:

“In that moment, from that distance, the idea of blaming one person for the outcome of a football game – which involves thousands of interactions between dozens of players during a three-and-a-half-hour marathon of shifting momentum and randomness – seemed absurd. What is one man against the storm? But when the gods get angry, the people have to make a sacrifice.”

That dichotomy, the extreme “buck stops here” mindset at odds with the endless variables of the sport – fascinates Mathis-Lilley.

“These coaches become figureheads for entire regions of the country. They’re expected to not only to win these games, but to represent the values of their university or of their culture. At the same time, they are subject to all sorts of factors and influences that they have no control over whatsoever,” he said.

He points to an example from beyond the football field.

“People moving out of the Midwest to the South because there are more jobs there. That’s something that affects the quality of the [local] high school programs you can recruit from,” said Mathis-Lilley.

Jim Harbaugh followed up the 2021 season – his best at Michigan by far – with an 11-0 start this year and a top-three ranking in the country coming into this weekend. Ohio State coach Ryan Day’s team also enters the game with an 11-0 record.

The Wolverines and Buckeyes are undefeated teams with national title dreams, playing in one of the greatest rivalries in American sports, but the hot seat still looms. Mathis-Lilley believes Day is under more pressure than Harbaugh this time.

“Ryan Day has been fantastically successful by almost every measure as Ohio State’s coach. But the way he’s done it is predominantly by passing the ball. He’s got fantastic receivers, he’s got a great quarterback, and he has a lot of success throwing the ball. However, that is a bit of a departure from the tradition of how Ohio State has played football under [former coaches] Woody Hayes and Jim Tressel,” he said.

“I spoke to a big fan of Ohio State’s before last season. He made this prediction, he said everyone loves Ryan Day and as soon as they lose one game to Michigan, people are going to complain about how he passes too much and the team is too soft. And they’re not as tough as the Woody Hayes teams or the Jim Tressel teams. And that’s exactly what happened.”

And that means the pressure, as always, is on.

“[I]f they lose the game, I think [Day’s] absolutely going to be on the hot seat. I’m not sure they would get rid of him right away, but it’s going to cause a problem. And it goes back to that idea that the team is not just out there to win, but it’s to represent your culture and your strength in a way that the fans can appreciate as well.”

As for Mathis-Lilley, he’ll be watching, but he’s not planning on a relaxing afternoon.

“If Michigan’s ahead by 17 points in any game, I can relax a little bit. But until that point, no, it’s total tension.”

Editor’s note: Quotes in this story have been edited for length and clarity. You can hear the full interview near the top of this page.