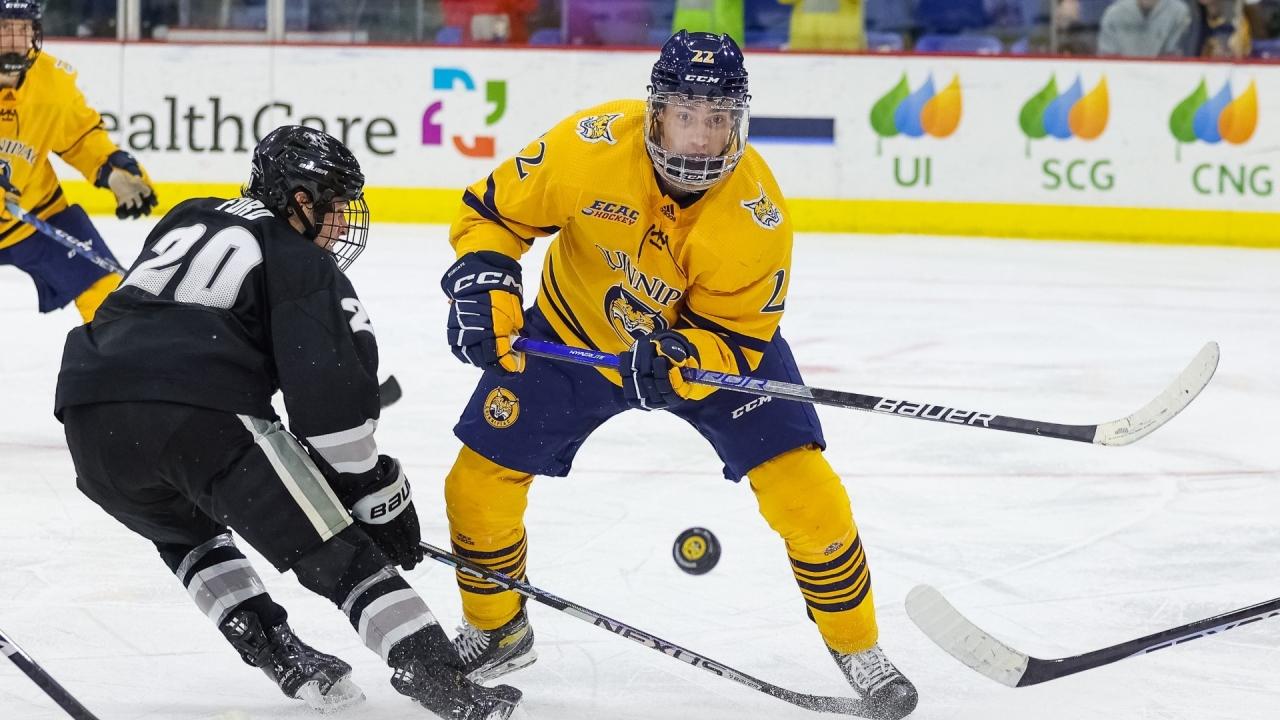 With the World Juniors winding down and the holiday season coming to a close, the men’s college hockey schedule is beginning to heat up again.

The first semester of action saw no shortage of surprises, from stellar individual runs to some surprise teams making waves.

As a new semester begins, here are the top storylines to watch in the second half of the 2022-23 season:

This question kicked off my preseason storylines, and it still stands.

The Pioneers have had a stranglehold on the No. 1 ranking in the USCHO poll for basically the entire season thus far, aside from some early season jockeying.

HISTORY: Every Division I men’s hockey champion since 1948

Sitting atop the NCHC standings, David Carle’s squad ranks in the top-15 nationally in goals per game (3.55) and is eighth in goals against (2.25). With one of the best records in Division I at 16-4-0 (8-2-0 NCHC), Denver has consistently found ways to win, even if there are areas to improve, like the 77.6 percent penalty kill. They’ve rattled off seven straight wins, going 14-2-0 since an early season upset sweep at UMass.

A look at the game-winner from Justin Lee.

The Pios also boast a couple of potential Hobey Baker candidates in sophomore forwards Massimo Rizzo (8-18–26) and Carter Mazur (15-5–20). Upperclassmen like senior forward Casey Dornbach (9-13–22) and junior defenseman Mike Benning (7-12–19) have contributed nicely as well. Goaltender Magnus Chrona has been serviceable with a .907 save percentage, even if he hasn’t completely replicated last year’s form.

There have only been eight repeat champions, but Denver might just be primed to become the ninth.

The race for the Hobey Baker

Like in any season, a couple early front-runners have emerged in the race for the top individual hardware in Division I.

First, there’s freshman forward Ryan McAllister and senior forward Jason Polin of Western Michigan. McAllister leads the nation with a whopping 38 points (10g, 28a) in 22 games, eight clear of Polin, the nation’s leader in goals with 19 (30 points), who also has five (!) hat tricks on the season.

Not to mention other experienced players like Northeastern senior forward Aidan McDonough (12-13–25 in 19 games) or goaltenders such as QU’s Yaniv Perets (.919 SV%; 1.78 GAA).

There will surely be more skaters and netminders that emerge as the season keeps moving along.

Can Merrimack, Penn State and Michigan State keep it up?

These three programs have been among the biggest surprises in Division I hockey this season.

Penn State and Michigan State were picked to finish as the bottom two teams in the Big Ten coming into the year, while Merrimack wasn’t projected to make a ton of noise in Hockey East either, landing eighth in the conference’s preseason poll.

WORLD JUNIORS: Here’s every Division I hockey player in this year’s tournament

Fast forward to the moment of writing this, and each team is well over .500. The Nittany Lions are a top-five team, ranked fifth and boasting a 17-5-0 overall record. Meanwhile, the Warriors have sniffed the top-five, ranking as high as sixth and currently sitting eighth nationally at 14-5-0. As for the Spartans, they’ve hovered just outside of the top 10, slotting in at 14th in the latest poll with a 12-9-1 marker.

We’d like to congratulate Alex Jefferies for receiving the @hockey_east Player of The Month award!

PSU has ranked wins over Michigan, Minnesota, MSU, Ohio State, Notre Dame and RIT. As for Merrimack, their most impressive victories have been against UMass (twice), UConn and Providence, while Michigan State has had wins over UMass Lowell, OSU, Penn State and Michigan.

Their schedules only get more difficult, given the amount of parity in Hockey East and the Big Ten this year. So it’s fair to wonder if they can maintain their pace through the end of the regular season and potentially make some noise in the postseason.

The races in the NCHC, Big Ten and Hockey East

Not only are Hockey East and the Big Ten loaded, but the NCHC is once again one of the premier conferences in the country.

Hockey East has six teams in the top 20, including Boston University, Merrimack and UConn in the top 10. Rounding out the pack is Providence, UMass and UMass Lowell. Not to mention Northeastern, who has fallen out of the polls, but could still be capable of a late-season push.

In the Big Ten, you have Minnesota and Penn State in the top five, plus Michigan in the top 10. Then there is Ohio State, Michigan State and Notre Dame.

Looking at the NCHC, Denver is atop nation and looks like one of the teams to beat, not to mention No. 4 St. Cloud State as well. Not to be forgotten is Western Michigan, coming off a dominant showing at the Great Lakes Invitational, as well as teams receiving votes like Colorado College and Omaha. Similar to Northeastern, Minnesota Duluth’s and North Dakota’s seasons may not have gone the way they might have planned, but there’s also potential for late surges with those teams as well.

A reminder of where we stand heading into 2023 📊 pic.twitter.com/VQx3IEo06h

Just one win separates Denver and St. Cloud in the NCHC, while the top five in Hockey East’s standings are jammed. While Minnesota has amassed an eight-point lead in the Big Ten, several of the teams behind the Gophers certainly aren’t out of it.

These three races will surely come down to the wire before the postseason.

Can anyone in the ECAC challenge Quinnipiac?

Pivoting to one more conference to keep an eye on, the ECAC sure looks like Quinnipiac’s to lose as things stand right now.

SCOREBOARD: Click or tap here for the latest scores around Division I men’s hockey

QU quickly surged in the rankings this season, locking down the No. 2 spot in recent weeks. The Bobcats have just the 40th strongest schedule in the country, and they’ve taken full advantage, boasting the best overall defense in the country (1.84 goals against per game) and checking in at fourth with 4.16 goals per game.

The last time we played Dartmouth?

If any teams have a shot at overtaking Quinnipiac, it’ll likely be No. 10 Harvard or No. 18 Cornell. The Crimson have the individual talent to keep up with QU and have one of the nation’s top offenses (3.77 goals per game) as well. Harvard’s and Quinnipiac’s power plays have a nearly identical success rate, just over 26 percent, while Harvard’s and Cornell’s penalty kill units have been superior to the Bobcats.

Quinnipiac will have to deal with the Crimson twice and the Big Red once over the course of the next several weeks, and those games will serve as some of QU’s biggest tests the rest of the way.