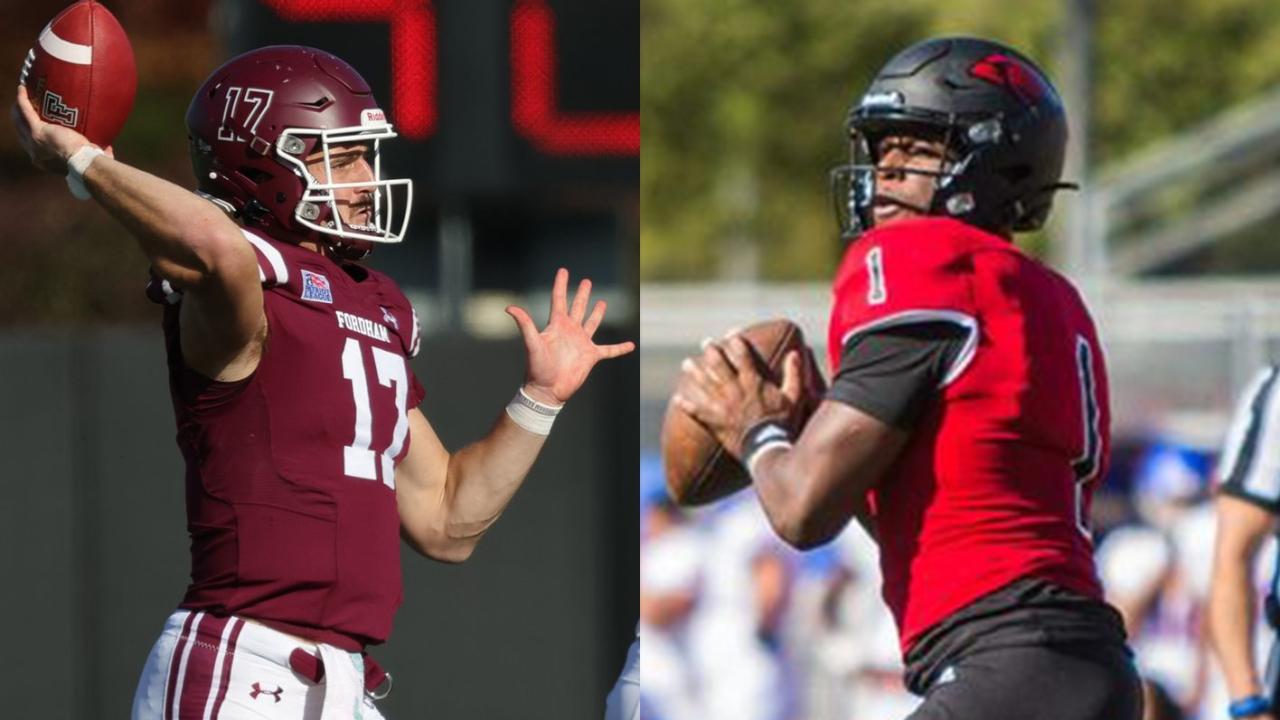 This list is cumulative, taking into account the entire regular season from start to finish. I’m sure there will be debates on the order, but remember, this is my opinion after following and watching games, analyzing stats and ranking the FCS quarterbacks from top to bottom throughout 2022.

🏆: CLICK OR TAP HERE FOR COMPLETE COVERAGE OF THE 2022 FCS PLAYOFFS

This top-50 FCS quarterback ranking evaluates quarterbacks from their performances this season, factoring in every game. Here are some — not all — of the criteria evaluated:

You can really flip flop No. 1 and No. 2 this season. I give Scott (50 TD passes, 4 INT) the top spot because of what he brings to the run game. That extra element separates him ever-so-slightly from Tim DeMorat.

Tim DeMorat is the leading passer in the FCS and has had a remarkable season. It’s nit-picky but he did throw twice as many interceptions (53 TD, 8 INT) as Scott Jr. That’ll be part of the justification for him at No. 2.

The next gap comes in the top five. The next three quarterbacks on this list have proven throughout the season that they are elite.

Michael Hiers separated himself as the third best quarterback in the FCS over the final month of the season. He put up big numbers AND efficient numbers to lead Samford to the SoCon title.

When Shedeur Sanders is at his best, he looks like the best quarterback in the FCS. When he’s not at his best, he’s still an elite player. That’s how talented he is. While Sanders had some rough games where he didn’t play to the level he showed in his passing clinic against Florida A&M in the season opener, his peaks are still so high that he hangs on to the fourth spot.

WOW: The top 10 individual performances through the first half of the HBCU football season

Matthew Sluka willed Holy Cross to an undefeated regular season, emerging as one of the top quarterbacks in the FCS. Sluka can do it with his arm or his feet, throwing for more than 2.300 yards and rushing for more than 900 yards.

The rest of the top 10 quarterbacks had great seasons, almost never having a dull performance. While this group isn’t on the superior level as the top five, they still are elite.

Tommy Mellott and Sean Chambers make up the first of two quarterback duos in the top 10. When each quarterback was out with an injury, the other stepped up and led the Bobcats to a win. What sets this duo apart is that both quarterbacks can run at an elite level.

In his first year in a Richmond uniform, Reece Udinski put on a show. He was the best quarterback in the CAA this year, finishing with 3,152 yards and a 24-4 touchdown:interception ratio, all while completing 74 percent of his passes.

Jake Dunniway and Asher O’Hara are a traditional quarterback tandem, with Dunniway the better passer and O’Hara the better runner. Together, they led an offense that averaged 41.5 points per game. O’Hara even scored a few game winning touchdowns this season.

SEEDS: The importance of a top seed in the FCS playoffs, explained

Parker McKinney solidified his spot in the top 10 and at No. 9 with a five-touchdown performance to close the season. McKinney’s passing prowess wasn’t just limited to FCS opponents; he also led Eastern Kentucky to a win over FBS opponent Bowling Green with 324 yards and three touchdowns.

If there was a Comeback Player of the Year award in the FCS, Matthew McKay might win it. After leaving Montana State right before last year’s playoffs, McKay brought things full circle by leading Elon to the playoffs after transferring during the offseason.

AWARDS: Every finalist for the Walter Payton, Buck Buchanan and Jerry Rice Awards

While most of the top 10 quarterbacks rarely had a dull moment, quarterbacks No. 11-16 did at some point in the season. However, these quarterbacks were sharp in every other game, at time pushing top-10 status, if not reaching it.

A 500-yard passing performance to close the season shows how talented Fred Payton is. He was capable of putting up big numbers at any moment this season. However, he misses out on the top 10 because of a three-interception performance against Chattanooga.

If Gevani McCoy played in the final week of the regular season, he may have been able to cement his rise up the quarterback rankings with a top-10 finish. Unfortunately, McCoy didn’t play that week. So, after overcoming a slow start in his first three games to establish himself as the best freshman quarterback in the FCS, McCoy lands at No. 12.

There’s not a doubt in my mind that if Nolan Henderson doesn’t get hurt, he plays well enough to finish the season as a top-10 quarterback. He’s that good. But injuries happen and Henderson faced and played through injuries in multiple games. He gets props for gutting it out, but some of his injured performances drop him to 13th.

Davius Richard dominated the MEAC with North Carolina Central en route to a Celebration Bowl berth. He threw for 24 touchdowns and ran for 13 touchdowns and is likely to win MEAC Offensive Player of the Year honors when that award is announced. Yet, Richard struggled in North Carolina Central’s two losses, which included throwing an interception in the end zone against South Carolina State in the clutch. That keeps Richard from rising any higher.

Lucas Johnson is another quarterback that flashed top-10 potential before the injury bug bit him. Montana only had one loss before Johnson got hurt; the Grizzlies finished the season with four losses. When healthy, Johnson is a dynamic playmaker with the ability to make plays in and out of the pocket. Johnson had a great season, but injuries drop him to 15th.

Paxton DeLaurent finished the season with 2,155 yards, 17 passing touchdowns and just four interceptions. Those numbers are better than some quarterback’s entire season and DeLaurent missed the final two games with an injury. He’s another quarterback that when healthy could be a top-10 quarterback.