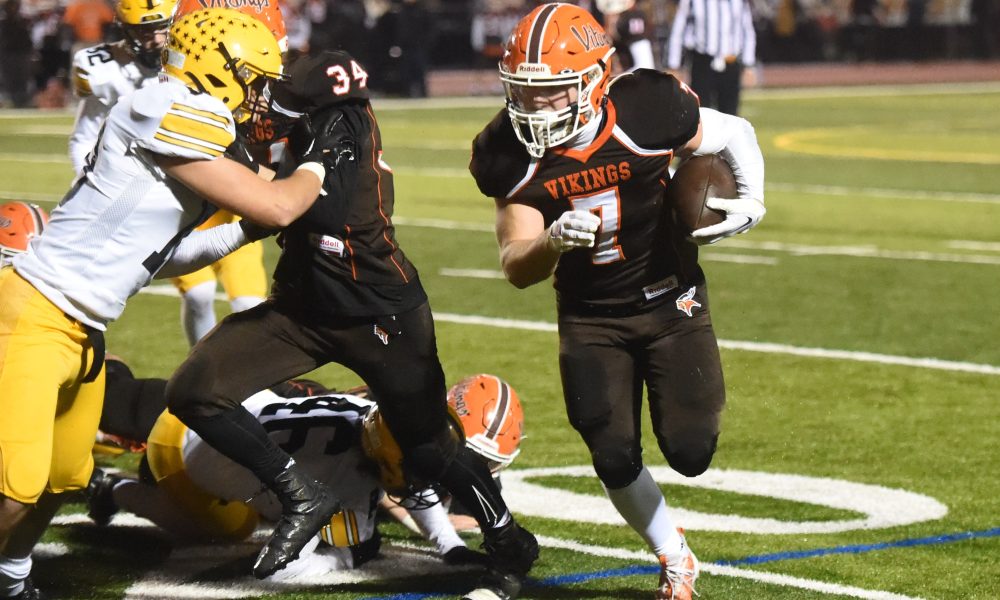 Koehler spent his sophomore and junior seasons as backup to the area’s top quarterback in Ethan Kohler, knowing the experience and tutelage would pay off in his senior season.

And did it ever. Through the first two games of 2022, Koehler was completing over 80 percent of his passes with six touchdowns, the highlight a one-point win over Downingtown West that Koehler sealed with a first-down run in the dying seconds.

He had no idea it would be his final high school football game.

“I was able to finish the game,” said Koehler, who hurt his knee on the aforementioned scramble, “and my expectation was I’d sit out the following week and come back, ready to go.”

But Koehler’s MRI results told a different story. A torn ACL and meniscus meant taking the field again this season would be out of the question. His season, and his high school career, were over just as it really got started.

“It was really upsetting because I’d waited a long time to play this season with my friends,” Koehler said. “We were off to a great start, too.”

A high school senior waits two years for a chance to play alongside his friends and gets off to a great start, only to have the opportunity taken through no fault of his own. There aren’t many people who’d blame Koehler if he’d walked away from football that day.

But that’s not who he is, and that’s not the kind of program Perkiomen Valley is. As one of four team captains, Koehler knew he wanted to be a part of the remainder of the Vikings’ 2022 season – wherever it might lead.

Koehler’s story may be the most poignant example of how Perkiomen Valley continues to reach new heights in high school football. The Vikings’ season ended Friday night in a one-point setback, 14-13 against Central Bucks West in the District 1 Class 6A semifinals.

It’s the third time in the past decade the Vikings have reached this level of the postseason, and while they still await the big breakthrough, future opportunities seem likely because of the program’s ability to consistently produce leaders like Koehler and his fellow team captains.

When Koehler learned the extent of his injury, one of the first people he told was sophomore Pat MacDonald. Projected to be Perkiomen Valley’s starting JV quarterback this season, MacDonald was about to get a double dose of reality – the crushing news about his friend Koehler’s injury, and the realization that on the field, the Vikings would now be his team to lead.

“We were already friends, just by being the two quarterbacks. We’d talk about the game plan and what the opposing defenses are doing,” Koehler said. But after two years behind Ethan Kohler, it was time for Koehler to become the mentor.

“This is a pretty big thing to put on a sophomore who hasn’t even played JV yet,” Koehler said.

A win at Cheltenham was followed by MacDonald’s first home start against state power Roman Catholic.

“If I were him, I would’ve been a nervous wreck all week,” admitted Koehler.

But the senior captain’s mentorship helped MacDonald keep a cool head, and while the game ended in the Vikings’ first loss, the sophomore was no worse for the wear.

“He’s just having fun playing football,” Koehler said. “Quarterbacks take the blame more often than not, so my biggest thing is just making sure he maintains his confidence.”

Each year, Perkiomen Valley has one junior serve as a captain alongside the senior leaders. Last season that junior was leading receiver Michael Poruban.

Now a senior and still the squad’s leading receiver, Poruban’s ability to lead by example came to the forefront when Koehler was injured. Perkiomen Valley’s Robert Sturges (30) breaks up a pass intended for Central Bucks West’s Jack Williams (7) in the end zone during their District 1-6A semifinal on Friday, Nov. 18, 2022. (Mike Cabrey/MediaNews Group)

While MacDonald gained experience and learned the offense, Poruban’s role changed from primarily a downfield threat to an on-field mentor in his own right, staying after practice and working on duplicating the same timing he enjoyed with Koehler.

“Obviously, with Danny going all the way back to freshman year, we’ve had a dynamic where each of us knows what the other is going to do,” Poruban said.

As an All-Area performer as a junior, Poruban was projected to be one of the top receivers in the area in 2022. Rather than focus on ‘what might have been,’ Poruban chose a ‘what will be’ approach, putting in extra time to develop chemistry with MacDonald.

“Everyone put in that effort – receivers, offensive linemen – to throw extra, build that confidence,” Poruban said. “He’s stepped into that role perfectly.”

Sure enough, Poruban finds himself among the area’s leading receivers yet again, though he clearly doesn’t much care about such things.

“Team success,” Poruban said. “I don’t worry about statistics and moving past that part was easy. It allows us to focus on winning, making a run in districts.”

The third of the four captains is two-way lineman Grant Euker, who, like Koehler, only got to play in a couple of games this season. Just as Koehler was learning his prognosis, Euker was starting the process of getting cleared to return from an almost identical knee injury.

“As soon as I heard about Danny, I texted him right away,” Euker said. “I know as well as anyone how long a process (recovery) is, the mental toll it can take on you. Perkiomen Valley’s Jacob Stewart (34) looks to get past Central Bucks West’s Matt Cleland (32) after his reception during their District 1-6A semifinal on Friday, Nov. 18, 2022. (Mike Cabrey/MediaNews Group)

“I told him right away that I’d be here for him, any questions he had or anything he needed.”

For Euker, who made his return in the Vikings’ Pioneer Athletic Conference championship victory against Pope John Paul II, being a captain while missing much of the season has provided a second element of commonality with the injured Koehler. It’s one he hopes has served to make Koehler’s injury rehab easier.

“As captains, people look to you (for support) and it can feel like you don’t have that same support to look for from other people. I wanted to be that person for Danny during this journey.”

The junior captain for 2022 is Drew Kenworthy, who led his team in fumble recoveries and was among the leading tacklers as part of the Vikings’ outstanding linebacking corps.

Perhaps more importantly, Kenworthy’s enjoying a unique vantage point into the leadership skills of the three seniors – skills he can carry into his own senior season in 2023.

“I spend so much time with (my teammates) every day. I think I see them more than my family,” Kenworthy said. “It just shows that it doesn’t really matter what year you are. From freshmen to seniors, this is a brotherhood.”

Before the season, it was natural to believe the graduations of last year’s captains – Kohler, plus All-Area performers Jeremy Brewer and Jake Jonassen – would take their toll on the Vikings. It wouldn’t be a down year per se, just one in which the team needed time to find its footing.

So how did 2022 become one of the best seasons in program history? How did Perk Valley overcome losing two quarterbacks – one to graduation, one to injury – to come within a single point of the championship game in a loaded District 1 bracket?

“I think it’s the adversity we’ve overcome,” Euker said. “Danny’s injury, my injury, we’ve had other injuries along the line … everyone’s had their own battles, and it’s made the team stronger. If you’re not fighting, you’re not battling, maybe you get too comfortable.”

“Defensively, we had a lot of spots up for grabs this season,” Kenworthy added. “That gave us an edge during the offseason. Do you want to play in front of our great crowds, in front of our community? Then you’ll put in the work. It’s paying off now.”

“Our best teams are player-led,” Perkiomen Valley coach Rob Heist said. “It can’t come from me or our assistant coaches. We need our leaders to step up and take control, and these guys have embraced that.”