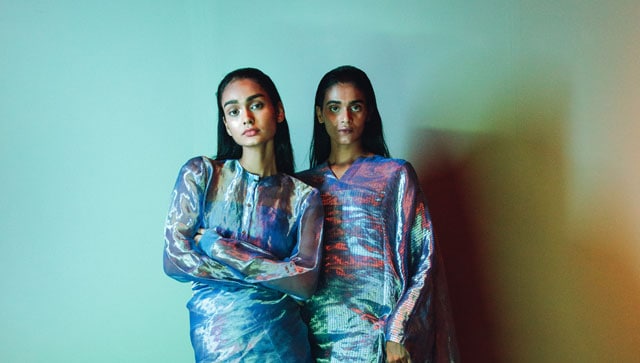 THE influence of Gaurav Jai Gupta’s Akaaro far exceeds the fashion label’s business. It really is a case study of how a small brand, that especially makes saris, can speak to its massive following. Perhaps because Gupta, 41, specialises in textile-first saris. Saris with delicate threads of steel or copper woven through its warp and weft. Saris that breathe a new meaning to the idea of zari as we know it.

“Fashion was accidental to me. I had no idea what it was about, but I was active in music, painting and dance. I just didn’t want to do anything regular,” Gupta says. A friend was applying to NIFT, New Delhi, and Gupta ended up applying too for a lark. 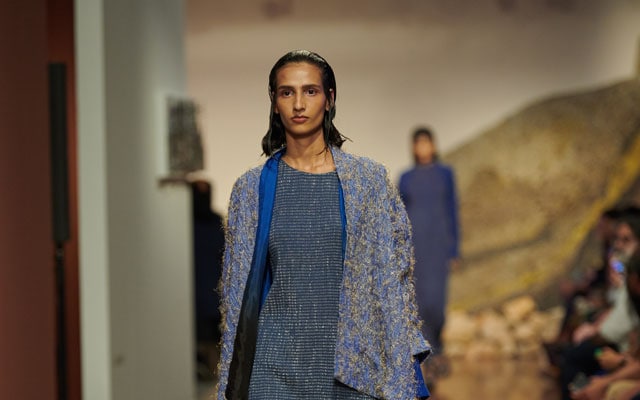 The result is a textile language that lovers of handmade and handloom fabric are just in love with. Gupta brought the idea of handwoven metallics into our lexicon. “It’s ironic because this was actually my final-year project in design school,” he smiles. He learned how to weave copper wires into fabric in an unusual experiment in 2001. “I just wanted to do something complex. I started looking at Japanese textile designers like the innovative Junichi Arai or his company Nuno. “I started looking at local materials and went to Panipat, which is like the Manchester of India. An uncle gave me a loom to work on on Sundays, when it would be free. There were electric wires everywhere and we were short of funds.” And this is how Akaaro, or ‘alphabet’ in Sanskrit, was born.

Akaaro started work abroad before coming to India. Gupta debuted the label at the London Craft Fair in 2008 with a line of handwoven accessories, and started retailing at top galleries and museums in Europe. In 2009, as part of a handpicked group of six international designers, he showcased at London Fashion Week. In 2015 and 2016, he was a finalist for the International Woolmark Prize. “The overseas market is very mature. India is still catching up, especially where retail spaces are concerned. Indian retailers are not very confident or ethical about the business,” he opines.

Akaaro doesn’t believe in seasons: his merino wool and silk velvet jacket which was first showcased in 2010 is still a bestseller, as are his game changing, widely emulated, metallic saris. Is he a fashion designer or a textile designer then? “I’m definitely not a fashion designer,” he quips. “The word has never existed in my vocabulary. I think I am somewhere in between. I love fabric and infuse very little design into it. But yes, fabric comes easy to me.”

Innovations in textile have always been important for Gupta, he says. “If something already existed I would not work with it, I always wanted to start things from scratch. Even in shapes, I was always looking for new shapes. When you do woven textiles, it’s starting from the very beginning, it’s like making a baby, or painting on a blank canvas.” The balance between textile and fashion forms the core of Akaaro. “It’s like the right amount of ingredients that make good food, to my eye clothing must have all the right proportions,” he avers.
Gupta weaves quite comfortably and says fashion schools in India must have a far greater focus on using a loom than the three-four months they give to it in a three-year course. “I really learned how to set up and operate a loom not in NIFT but in the Chelsea College of Art & Design.” Gupta now makes his own fabric, at least as samples before giving it to his weavers in Phulia, Chanderi and Varanasi, and smaller productions in Odisha, Amritsar, Kanchipuram and Jaipur. “The main collections have things from everywhere. I don’t use terms like Chanderi and Benaresi as these are just trade names, I could weave merino wool in Benares. And I get an amazing glaze in my fabric from Chanderi.” Chanderi, he says, has the best quality of textiles, while Phulia has the best understanding of colour. Gupta admits our idea of sustainability is skewed. “There is a lot of greenwashing and real sustainability requires a lot of commitment. But we try, we do simple things like make natural fabrics and use only three-four types of materials. We use stainless steel often instead of zari, and it’s the only man made fabric we have used,” he explains.
Gupta sees Akaaro as a strong but consistent brand in the coming years, especially in its quality and design language. “We are fiercely independent,” he explains, “And I can’t see it diluted into something else.” Akaaro launched its ecommerce during the pandemic, and along with one or two flagship stores, Gupta says he will do just fine.

Namrata Zakaria is a seasoned writer and editor, and a chronicler of social and cultural trends. Her first book, on late fashion designer Wendell Rodricks’ Moda Goa museum, is due to be published shortly. Zakaria is especially known for her insider’s take on fashion, luxury and social entrepreneurship in India. Her writing is appreciated for shaping opinions, busting myths, making reputations and sometimes breaking the odd career. Zakaria is also involved in putting together philanthropic efforts in the field of economic and environmental sustainability.