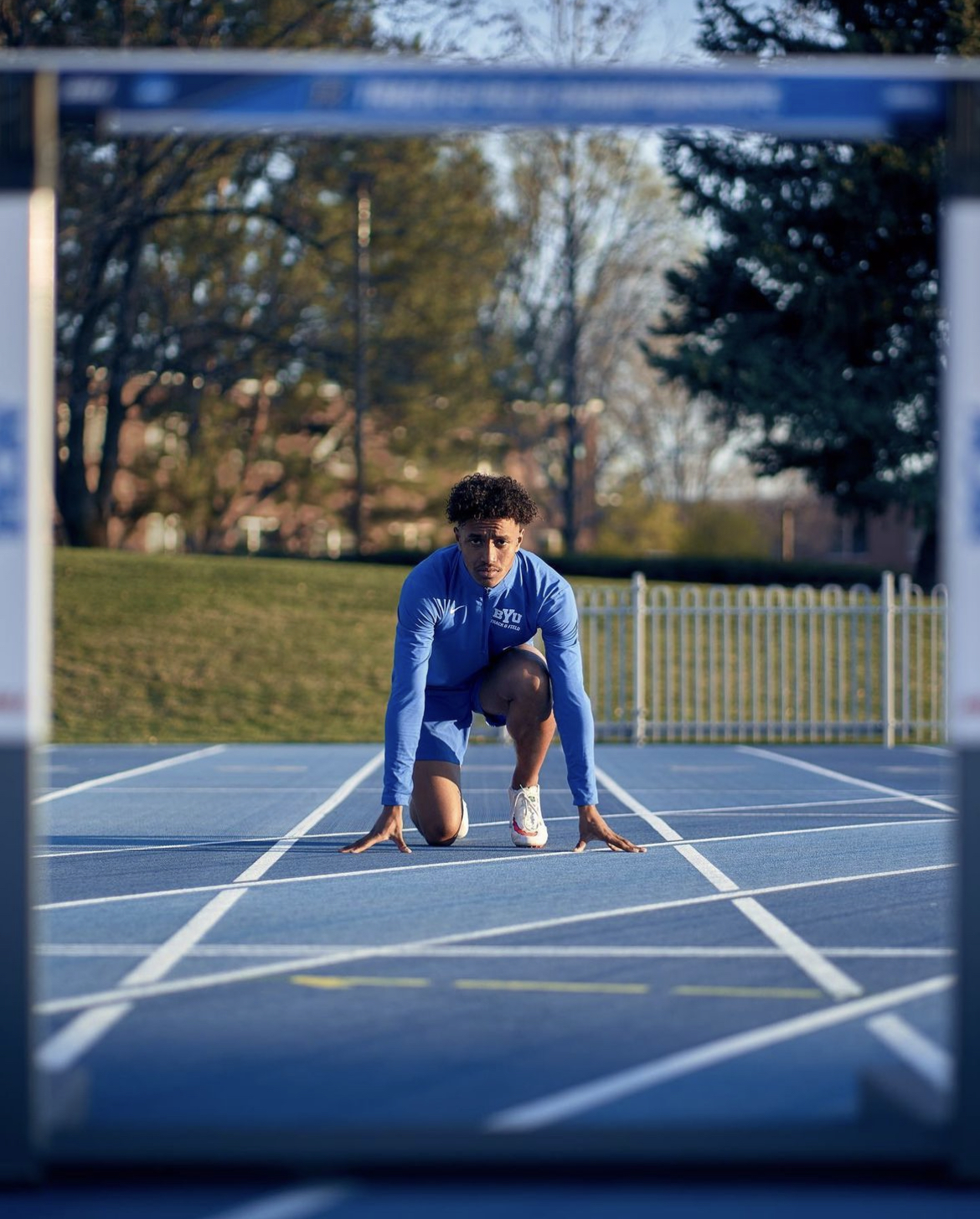 Between BYU track and field, BYU Men’s Chorus, keeping his grades up in the pre-business program, releasing his own singles and a renewed interest in football, BYU sophomore Corey Johnson is pulling quite the balancing act.

As a highly recruited hurdler out of high school, Johnson’s speed is staggeringly real, attracting interest from both Baylor and BYU’s prestigious programs alike, he said.

“When I was 16, I raced a guy that now runs for Nebraska and smoked him. My brother ended up recording a video and sending it to BYU,” Johnson said. “At the time I was really trying to get BYU’s attention and they ended up messaging me.”

In his winning race, Johnson said he ended up having a two-hurdle lead on his competitor, leaving him with enough time to turn and look back at him during the race. Deep into their track preliminaries, the two faced each other in the same event the very next day, according to Johnson.

“He kept punching my trail leg, with one of his arms he’d shove my second leg quickly after every hurdle, and I finally fell on the last hurdle,” Johnson said. “So I was never able to go to further and further onto state.”

Although unfortunate, nowadays Johnson said he looks at this experience maturely, as he began training for the next season the day following that event. Come his senior year, he would be ranked as the 15th best hurdler in Texas, while playing both football and basketball.

“I just love adversity stories. I do have stories where I do good and stuff, but I feel like you learn more while dealing with adversity,” Johnson said. “I’m built from adversity.”

This adversity would seemingly follow him to the collegiate level, keeping Johnson off the football field for various reasons. A position change from the offense’s quarterback to the defense’s cornerback his senior year of high school being one of them.

Batchlor Wise Johnson IV, a former BYU wide receiver and Johnson’s older brother, made sure to point the scouts in the right direction. This later led to BYU’s defensive back coach’s interest in the multi-talented speedster out of Katy, Texas.

“During my senior year, I went to one of my (older) brother’s practices and I met the DB coach and he asked if I was going to join them in the fall,” Johnson said. “At the time, I told them probably not.”

In a peculiar turn of events, Johnson turned down his informal offer to play Division I football at BYU.

Johnson said he will look to get close with the defensive back coaches at BYU and work exclusively with his fundamentals and footwork to try out for the football team.

Pasa said he and Johnson train extensively, with a large emphasis on lifting and bulking up in size. This duo also plays intramural flag football together, a fun luxury Johnson will no longer be able to participate in, due to regulations leaving official BYU football players unable to play intramurals.

“I don’t know what position he’d put himself as. I personally see him at wideout. I see him as the best or one of the best walk-ons this year — I’m confident in my boy,” Pasa said.

Johnson reaffirmed his motivation to play football by saying that his passion has never left him.

He said he looks back sincerely on times he would train with his brother in their backyard at just five years old. This is where he said he started developing his love for the game — a love that would never fade.

Continuing to run track would throw a corkscrew in his agenda, according to Johnson. He looks to place track on the side burner to focus on football and remain a member of BYU Men’s Chorus.

“(Corey) is always doing all types of things, if anyone can make the transition from sport to sport, it’s Corey,” Jared Escobar, a childhood friend, said.

Although Johnson’ friends swear by his speed, the question still lies of whether or not his skills will transfer from the track to the field.

“Track has helped out big time with my speed. I ran the 110 hurdles, so it has definitely improved with my explosiveness,” Johnson said. “If you’re fast on the track, you’ll be fast on the football field.”

Training with his defensive back coaches and learning to control his speed will play a key role of Johnson’s future success in trying out for the team, he says.

“This is like my redshirt year, and I’ve been lifting with the coaches and new transfers, then I’ll officially try out in the spring,” Johnson said.

Much like his close friends, Johnson is also confident in himself. “Can I make the team? Oh yeah, I can definitely make the team,” he said.