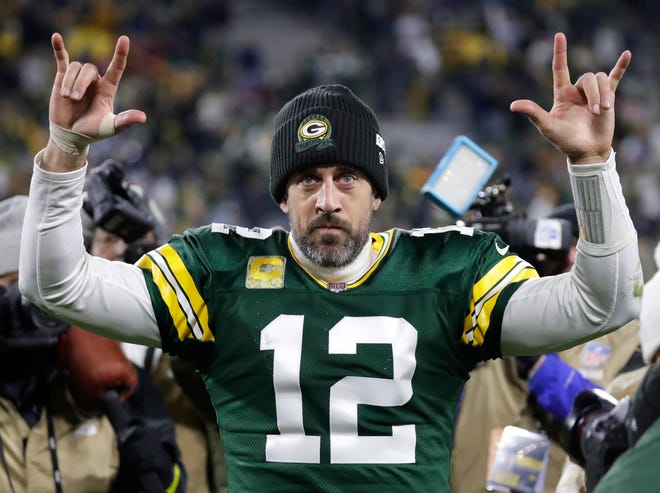 Aaron Rodgers has been synonymous with football for nearly two decades as the Green Bay Packers’ quarterback, but as he nears the end of his career — whenever that may be — he acknowledged it’s not “all ball all the time.”

Remember, the soon-to-be 39-year-old seriously considered retirement after the 2020 season and wanted to be the full-time “Jeopardy” host not too long ago after he served as a two-week guest host. This past offseason he was a podcast regular as he made the rounds talking about his ayahuasca use.

“Of course you think about life after football,” Rodgers said during his Tuesday appearance on “The Pat McAfee Show.”

“It’s not like (I) turn it on at some points and turn it off. When you have interests outside the game there’s always things that come up that you spend time doing in some of your free time that you’re going to do more when you’re done playing. Of course, there’s that thought.”

Rodgers, who has a 19:7 touchdown to interception ratio this year following back-to-back MVP seasons as the Packers have fallen to 4-7 and outside the NFC playoff picture, said his outside interests haven’t changed his preparation for games this season.

“But it also doesn’t change that you can’t have interests outside of the game that you take your mind to from time to time. I look forward to those things,” Rodgers said. “Those aren’t in the front of my mind. Those are near the back. But to sit here and say it’s all ball all the time, and blah blah blah (expletive). I don’t know, that’s not the way I am.

“There’s life after football and there’s life outside of football even during the season,” Rodgers continued. “It’s important to keep that balance … You’re all about finding ways to tweak little things, to improve and to be more efficient, but you’re also a person. You have a life.”

Rodgers has no plans to get into coaching when he retires

So what does he see his life looking like after football?

“Definitely not coaching, I can tell you that,” Rodgers said Tuesday. “I have no interest in being at the facility all day and guarding my desk.”

While he has “zero interest” in following the lead of former players who have traded in the pads for the headset as a head coach, Rodgers did say the “management side” would be the only thing that would slightly pique his interest.

McAfee and AJ Hawk, Rodgers’ former teammate and close friend who joins McAfee as a co-host, asked him if he could see himself getting into the media business, like Tom Brady will eventually do after signing a 10-year deal with Fox.

Rodgers asked if there were other options.

“You’d be great at that,” Hawk told him.

The co-hosts told him he could be a hippie or shaman. Rodgers, of course, has spoken out about his use of the hallucination plant-based drug ayahuasca.

Rodgers ‘not looking forward to the end’ whenever that comes

Despite Rodgers’ extension last offseason that gave him the highest average salary in the NFL ($50 million for the first three years), Rodgers acknowledged he isn’t sure how long will play.

“It’s been an awesome run,” said Rodgers, who is in his 18th NFL season and 15th as the Packers’ starting quarterback. “I’m really proud of what I’ve accomplished. I’m not, like, looking forward to the end. Life after football is going to be a tough transition as it is for every player. I don’t know when that’s going to be. I don’t know if it’s going to be after the season, after three more seasons. There will be decisions we’ll have later down the road. “

For Rodgers and the 2022 Packers, who are coming off their sixth loss in seven games, they continue the season this week at the NFC-leading Philadelphia Eagles (9-1) on “Sunday Night Football.”