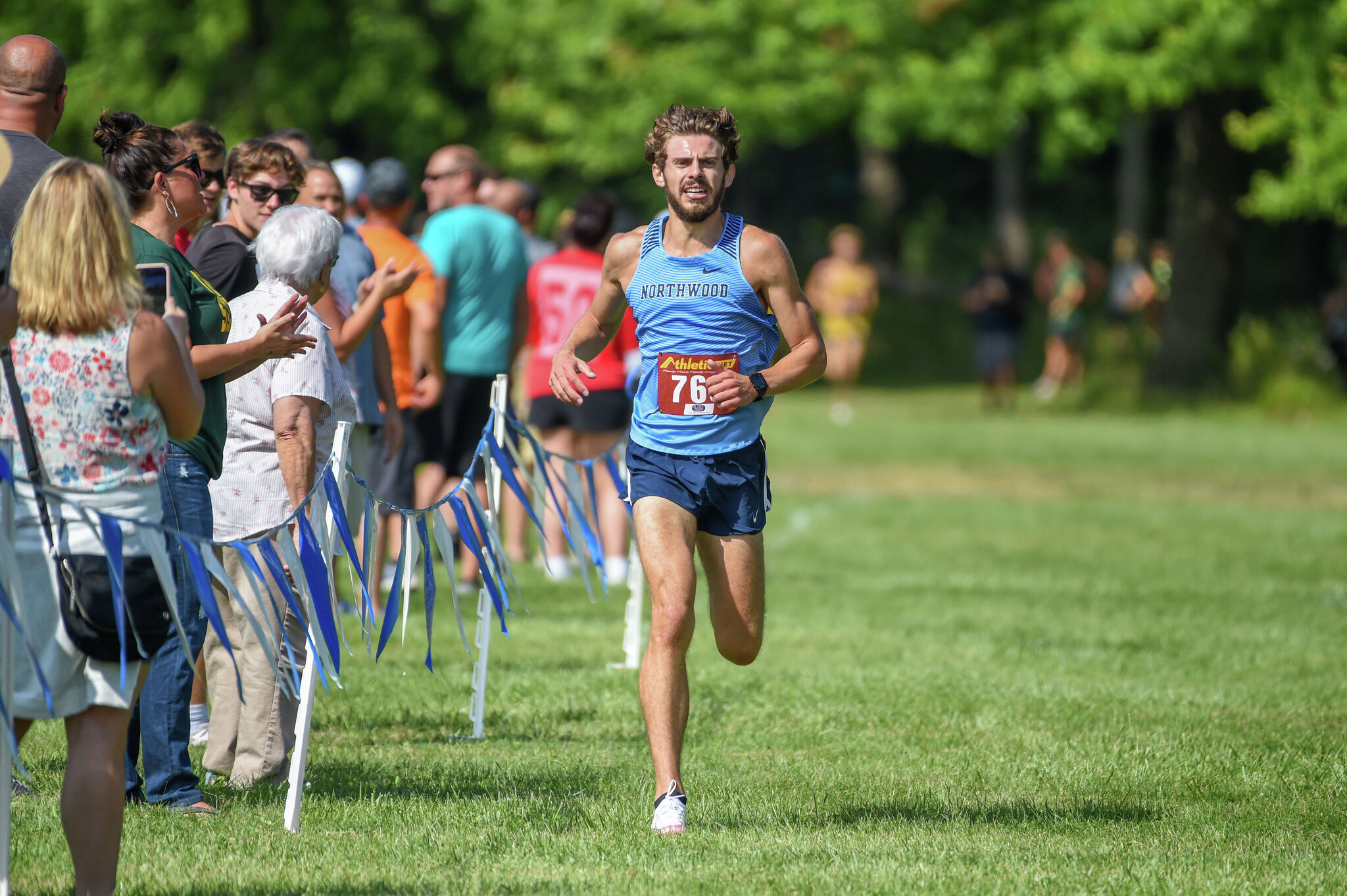 A few years ago, Northwood cross country coach Jeremy Wilk was concerned primarily with just getting enough runners together to field a team. His job responsibilities have changed a bit.

Lately, Wilk is keeping busy preparing for big meets and updating the school recordbook – and having a hard time believing what he is seeing.

“I felt good about where we were when the season began, but, to be honest, I didn’t believe that we could do this as a team at Northwood,” Wilk said of his men’s team, which has qualified for the NCAA Division II Championship for the first time in program history. “This is my seventh year here, and in my first year we had five men and five women, which is the minimum number you need to have a team.

“We’ve been trying to build (our programs) quickly, and I knew we could be good, but we didn’t want to talk about nationals as a goal. We just wanted to focus on being the best we could be,” he added. “We didn’t talk about (long-term goals). We just wanted to get better and let the chips fall wherever. I didn’t expect or think that this would be possible here, so to have it happen is very special.”

The Timberwolves, who also earned a first-ever national ranking this season, enter the national meet at No. 29 in the nation. They were one of 10 teams nationwide to earn at-large berths to the NCAA finals by virtue of their performance throughout the season.

According to Wilk, his team’s biggest improvement this season wasn’t necessarily in personnel so much as it was in attitude and expectation.

“We always talk about culture and how important it is, and that was probably our biggest jump this year. This has been our best year for (team chemistry) – everyone rowing in the same direction,” he noted. “There’s no lack of belief in what we’re doing or in each other, whereas there was always some semblance of that in the past. We’ve added a lot of team-building stuff like playing sand volleyball games and stuff like that on recovery days, whereas, in the past, if we didn’t practice, we just didn’t meet.

“It’s a really good group. They work their butts off, and they want what’s best for everyone, not just for themselves,” he added.

Leading the Timberwolves this year has been Dillan Haviland, a senior from St. Johns who transferred to NU from the junior college circuit a couple of years ago and who has rewritten the school recordbook. Haviland set – and then reset – the Northwood record for the eight-kilometer distance this season, clocking a 24:33.0 in mid-September, then bettering that mark with a 24:04.0 on Oct. 1. He also owns the school’s fourth-best time at the 10-kilometer distance, having clocked a 31:57.57 at the NCAA Midwest Regional on Nov. 19.

“Dillan was going to go to Davenport, but then he changed his mind and took a year off, and last year was his first year at Northwood. It took a little while for him to get going, but then things really started to click,” Wilk said.

“He broke our mile record (in track) last year, and then he stayed in Midland and trained (during the summer), and he’s taken a minute and a half off his PR (personal record),” Wilk added.

Senior Zane Aldrich from Whittemore-Prescott owns the school record in the 10K with a time of 30:09 set last season, and he also ranks fifth in the 8K at 24:57. Aldrich qualified for the NCAA Division II Championship as an individual last season.

“Zane is a really high-caliber runner. He dealt with an injury, and he’s had to come back from that, but he’s definitely grown in the team aspect of running,” Wilk said. “He’s always been an incredibly hard worker, and now he’s 100-percent bought in to the team concept. That’s something I’m really proud of him for.”

Sophomore Preston Earl from Warren De La Salle is second only to Haviland in the school recordbook for the 8K distance, having clocked a 24:42 this season. He also stands at fifth in the 10K with a time of 31:57.

“Preston was a dual sport soccer/track kid in high school, and he has really come into his own more than I or he thought he would,” Wilk noted. “He’s a great team leader despite being young. He’s a kid who did everything right, and he brings a positive attitude every day, and he’s very uplifting to others. He has definitely been a pleasant surprise.”

Sophomore Josh Jones from Harrison has been among the Timberwolves’ top five runners all season and also has been a pleasant surprise to Wilk. Jones ranks ninth in school history in the 8K at 25:10 and 14th in the 10K at 32:47.

“Josh was by far the slowest (of our runners) in high school, but he started training very hard during his senior year and made himself better,” Wilk said. “He’s not someone I would’ve recruited, but he’s one of the most driven, focused people I’ve ever worked with. … He’s the second-fastest freshman in Division II this year.”

Junior Brandon Boyd from Plymouth is a fourth-year runner who ranks fourth in school history in the 8K at 24:55 and eighth in the 10K at 32:15.

“Brandon was not in our top five at the regional, but he’s been a fixture in our top five in every other meet,” Wilk said. “He’s a kid who has prioritized running high on his list as much as anyone. He wants to be a track or cross country coach in the future, and he’s our glue guy. He organizes team activities and does a lot of great stuff when we host recruits. He’s a very hard worker.”

“This is Carson’s first year ever running the 10K despite being a junior, because he lost a year to COVID and then lost a year with injury,” Wilk noted. “He’s an incredibly driven, hard-working person, and he cares so much (about running).”

Sophomore Lucas Oberle of Goodrich, freshman Sam Smith from Petoskey, and sophomore Joe Shaya of Birmingham Brother Rice are also members of this year’s team, and they rank 13th (25:31), 14th (25:33), and 24th (25:51), respectively, in school history in the 8K.

The Timberwolves will head to University Place, Washington for the NCAA Division II Championship on Friday, Dec. 2, where they will compete against 33 of the top teams in the nation. Wilk said he thinks his team can hold its own.

Wilk said he had a good feeling about this year’s squad early in the season after watching the Timberwolves shine in a meet held at Calvin University.

“Dillan broke the school record for the first time at that meet, and Brandon came in third. Joe was not in the picture a lot for us last year, but he went out in that meet and PRed by over two minutes and finished top 10. At that point, I thought, ‘Gee, I think we’re going to be really good this year,’” Wilk recalled with a chuckle.

“ … It was a low-key meet, but our men had not won a meet in a long time, certainly not since I’ve been here,” he added.

Wilk said he thinks one big key to NU’s success this fall – and its berth in the national final — has been depth of talent and teamwork, as different Timberwolves have taken turns making an impact.

“Every single meet, it’s been someone different who has stepped up. It fluctuates. The cool part is that we’ve had so many people have breakthrough performances on any given week,” Wilk said. “ … It’s just been so cool. It’s not just one person or two people. Whenever someone has had a bad day, someone else has stepped up.

“ … By people stepping up like they have, we didn’t take any bad losses,” he added. “And that, I think, is why we got the at-large bid (to the national meet).”