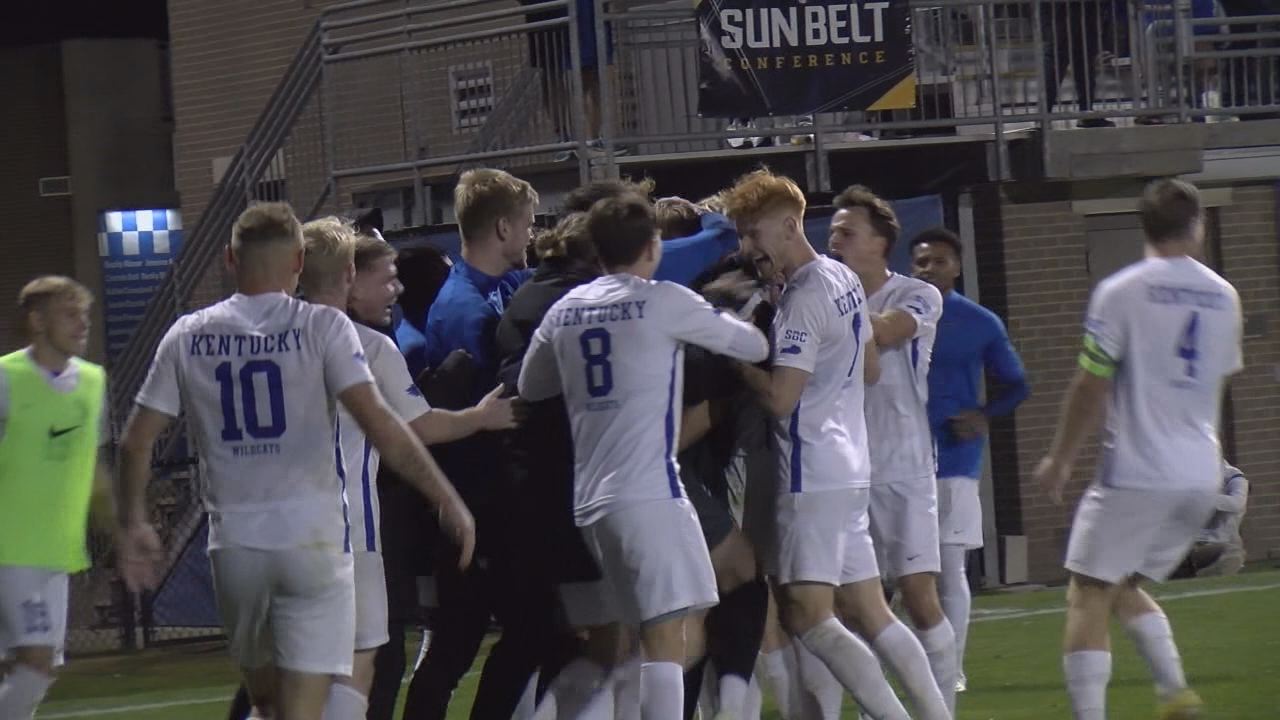 The Cats will face Pittsburgh at the Bell on Sunday at 6 p.m.

LEXINGTON, Ky. (WTVQ) — The 2022 has kicked off, but soccer is also the talk of ‘Big Blue Nation’ recently, as the UK Men’s Soccer Team has advanced to the Sweet 16 in the NCAA Tournament.

The UK Men’s Soccer team is grateful for many reasons this season.

“There’s only 16 teams left, I think at this point, anyone can win it, it’s going to be a really tough team, or tough game on Sunday. But we’re looking forward to hosting another game and hopefully get the Big Blue Nation out again,” says UK head coach of the Men’s Soccer team, Johan Cedergren.

Defender Lucca Rodrigues adds, “last year, we were at Clemson we lost in the Sweet 16. This time, we get to run it back but at home. So just take the pride that your fans are going to be here, your people supporting you and just make sure we take pride and defend our stadium.”

The Cats continue on the road for the coveted national title hardware, and will be taking on Pittsburgh on Sunday in the NCAA Tournament round of Sweet 16. It’s an accomplishment the team knows couldn’t have been achieved, without the 12th man — ‘Big Blue Nation.’

“Big Blue Nation ever since I came here in 2009, it’s been amazing. But I think especially this year,” says Eythor Bjorgolfsson, who has been a key player of the team.

“Just the amount of support the amount of fans in the student section behind the goal. And I think that the guys know that going into game day as well. So of course, they’re excited to play,” said Cedergren.

“We haven’t played a sweet 16 here in four years, since my freshman year,  so I was really excited to be back in my last year in played in front of hopefully, a full force, BBN,” adds Danny Evans, a forward in the team.

Coach Johan Cedergren has been coaching the Cats for the past 11 seasons, adding that this year’s team is also special because of the fight they continue to display on the pitch every outing.

“I think that if you look at us defensively this year, with the amount of pressure that we put on the opponents and the questions that we asked of them, I think we’re definitely one of the best defensive teams in the country,” he says.

One of the highlights this year has been freshman Goalkeeper, Casper Mols.
Earlier this year Mols was named Sun Belt Conference Goalkeeper of the Year.

“What he’s doing this year is spectacular. And I mean, we may not talk about him too much. But no, I think, he’s done a spectacular job. And I think he has a very bright future ahead of him,” says Danny Evans of Mols.

The team says at the end of the day, it’s all about leaving everything on the field.

“First and foremost, thank you for everything you’ve done this season. We’re extremely thankful for all the support we got the whole season. And really just hope to see you one more time,” also says Rodrigues.

Game time is at 6 p.m on Sunday at the Wendell and Vickie Bell Soccer Complex.