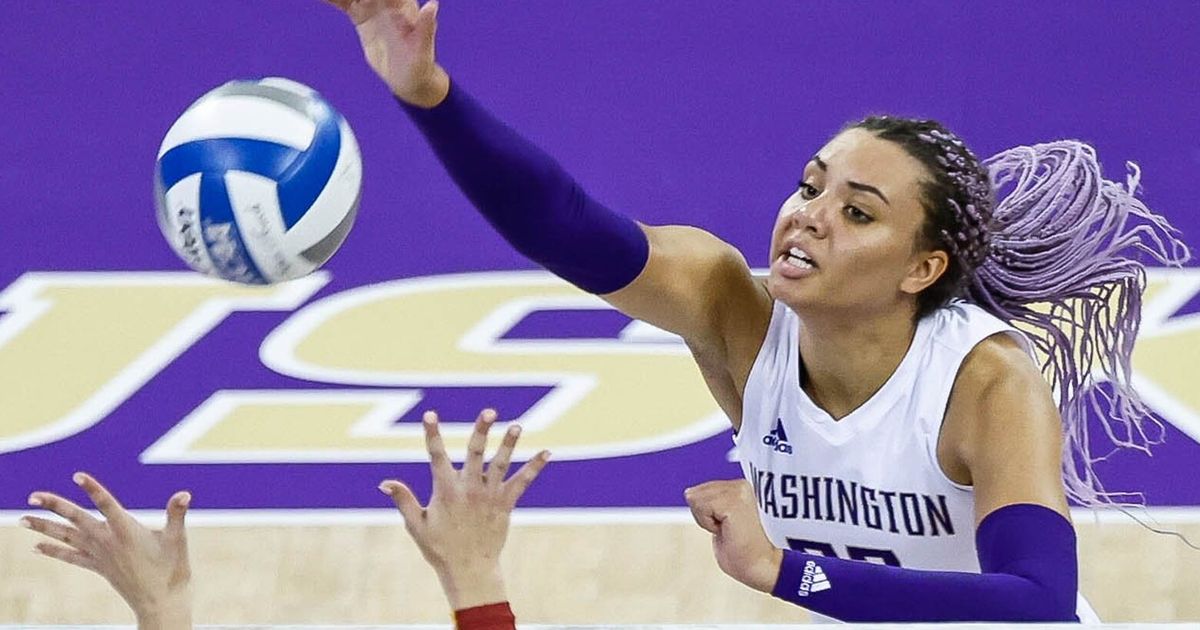 The evening at Alaska Airlines Arena began with a celebration of the six Washington seniors who were playing their final home games.

And it ended with another celebration.

That’s because the home finale for Dani Cole, Shannon Crenshaw, Marin Grote, Claire Hoffman, Sianna Houghton and Ella May Powell was a winning one.

“It doesn’t always happen, but you want every senior’s last memory of Alaska Airlines Arena to be perfect,” said Washington coach Keegan Cook. “With this group, nothing else would have been appropriate, for how much they’ve won in their careers.”

The Huskies made Cook look like a genius, scoring four of the next five points to win the first set.

The key point came with the score tied at 22. Powell made a great save on an excellent USC serve, making a dig just barely above the floor. The ball went to Lauren Bays, who set up Emoni Bush’s kill.

USC seemed in control of the second set with a 17-13 lead. But that’s when Crenshaw served six straight winning points in a 7-0 run — aided by a pair of blocks and a kill by Grote.

The Trojans rallied to tie the score at 23, but UW scored the next two points, with Bush serving an ace on the set-winning point.

USC took command early in the third set, and unlike the first two sets, the Huskies were unable to claw back into it.

Cook said he made a couple of matchup and blocking assignment changes in the fourth set.

“We started with Claire and Marin in the front row a little earlier, and they did what they do,” Cook said. “They were outstanding throughout the match.”

Washington took quick control of the fourth set, leading 7-2 and never letting USC get closer than three points after that.

And the party, which started before the match, resumed.

Hoffman led the Huskies with 14 kills, including on the match-winning point. Grote had nine and Crenshaw and Sophie Summers had six each. Powell had 32 assists, nine digs, two blocks and two kills.

The Huskies had just seven service errors to 19 for USC.

“I had a lot of confidence in them coming in,” Cook said of his players. ” … I am really impressed with the way they finished that match.”

The Huskies close out the regular season with a Friday night match at Washington State.

NCAA tournament selections will be announced Sunday. Washington is expected to get an at-large bid into the 64-team tournament, but is not expected to be one of 16 seeds that will host first-round matches.

“We are getting healthier, we’re gaining some confidence and Friday (at Washington State) will be a big test,” Cook said. “It will be a great environment and it will be exactly what we will experience in December (in the NCAA tournament).”