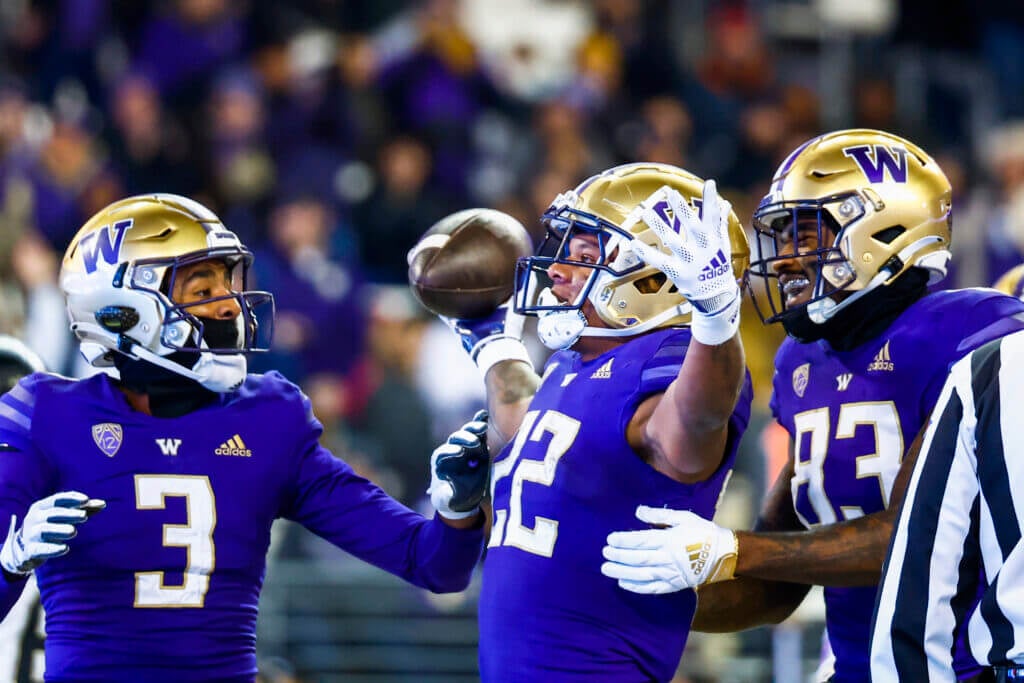 1. Per the conference, there are two possible paths for the Huskies to reach the Pac-12 Championship Game, where they would face USC, which clinched a spot by beating UCLA on Saturday. Neither scenario is likely, but one is far more feasible than the other.

The first, and least likely: Washington beats Washington State, Oregon State beats Oregon … and Colorado beats Utah. Don’t spend too much time hoping for this one.

Why does the UCLA game matter, if the three-loss Bruins are already eliminated from contention? It involves the “record vs. next-highest-placed conference opponent” tiebreaker.

In this scenario, UW, Oregon and Utah each would finish with a 7-2 record. The first tiebreaker for a multi-team tie is head-to-head, but Washington didn’t play Utah, so that’s out. The next tiebreaker is win percentage against all common conference opponents. These three teams share six common opponents — WSU, OSU, Stanford, UCLA, Arizona and Colorado — and each has a 5-1 record against those opponents. No resolution there.

The next tiebreaker: record against the next-highest placed common opponent in the conference standings. This is where UCLA comes in. If OSU beats Oregon but the Bruins beat California to finish 6-3, they would be tied with OSU. The rules call for tied teams to be grouped together for the purposes of the next-highest-placed tiebreaker. UW, Oregon and Utah each would be 1-1 against the Bruins and Beavers, moving the process to the fourth tiebreaker — combined win percentage in conference games of conference opponents. That would go to Utah.

However, if Cal beats UCLA, OSU would finish in fifth place by itself at 6-3. Washington and Utah each beat the Beavers, but in this scenario, the Ducks would have lost to them and would be eliminated based on that defeat. The tiebreaker would then start over as a two-team tie between Washington and Utah. Those teams didn’t play head-to-head. They would have the same record against common conference opponents. But now, Oregon would be their next-highest-placed common opponent. Washington beat the Ducks, and the Utes lost to them, which would send the Huskies to the title game.

2. In the old model with divisions, Washington would simply hope for Oregon State to beat Oregon. But if the Huskies had taken care of business against Arizona State — a team that had already fired its coach and will finish either 3-9 or 4-8 — they would be able to clinch a spot in the Pac-12 title game by winning the Apple Cup (and would still harbor faint College Football Playoff hopes).

3. With that said, I’m not convinced Washington’s best path to a New Year’s Six bowl is through the conference title game, anyway. USC will merit CFP consideration as a 12-1 conference champion if it wins in Las Vegas. If the Trojans make the Playoff, the Rose Bowl would select a replacement team from the Pac-12, and history tells us it’s no sure thing the Rose Bowl would simply default to the Pac-12 title game loser. You might remember that in 2016, when the Huskies blasted Colorado in the championship game to clinch a Playoff spot, the Rose Bowl opted for USC over the Buffaloes — the Trojans had finished strong, handed UW its only loss and were clearly the better team. If USC wins convincingly against either Oregon or Utah and makes the CFP, a 10-2 Washington team would emerge as a legitimate option for the Rose Bowl. The Cotton Bowl will also fill one of its spots with an at-large selection, though the path there might be trickier with the SEC likely sending only one team to the Playoff.

4. Representatives from the Alamo and Holiday bowls each attended Washington’s game on Saturday. Those are the top two bowls in the Pac-12 selection order after the Rose. The Holiday Bowl, in particular, seems very interested in the Huskies, who haven’t played in that game since 2010, but would bring an exciting offense and an upward-trending program to a traditionally solid bowl game (and you could get down with San Diego in December, yeah?). The Alamo would be an appealing destination, too. So long as the Huskies win the Apple Cup, they should be in good shape to snag one of those spots. The Las Vegas Bowl has the No. 4 selection.

5. Dylan Morris handled his mop-up duty decently well. The interception wasn’t his fault, and he showed some wheels on scrambles of 23 and 9 yards. You’d still like to see him look a little more comfortable in the pocket. I figured we might see Sam Huard at some point, but Morris took all 20 snaps after Michael Penix Jr. came out of the game. Coach Kalen DeBoer said he would have liked to get Huard in the game, but wanted to give Morris another chance to get into a rhythm after his unfortunate interception, and no meaningful snaps remained after that final touchdown drive. So barring something unforeseen, Huard’s 2022 action may very well consist of 14 snaps and two pass attempts against Portland State.

6. It’s going to be an interesting next couple of months for the future of Washington’s quarterback room. Penix completed 19 of 31 passes for 229 yards and a touchdown before his early exit. It may have been his final game at Husky Stadium; if so, he’ll leave with a 7-0 record and victories by margins of 25, 46, 11, 18, 10, 3 and 47 points. Penix is the nation’s leading passer despite a season-low total on Saturday and has a chance to join an exclusive club of UW quarterbacks to win 10 regular-season games. Morris and Huard each have eligibility remaining, and 2023 commitment Lincoln Kienholz is set to sign in December. My guess is that if Penix goes, you’ll see the Huskies at least explore their options in the transfer portal.

7. Rome Odunze played 47 of 64 offensive snaps, per Pro Football Focus, but was only targeted three times and caught two passes for 17 yards. That dropped his per-game average to 93.1 yards, which ranks 10th nationally. With 931 yards this season, he’ll have to wait at least another week to surpass the 1,000-yard mark.

8. Jalen McMillan, meanwhile, followed up his huge performance against Oregon by catching eight passes for 98 yards and a touchdown, including a 27-yarder on a reverse flea-flicker. With 65 catches for 890 yards, he too is within range of a 1,000-yard season. Washington has never had two 1,000-yard receivers in the same season. Odunze and McMillan each have 65 catches. McMillan has 95 targets, per PFF, while Odunze has 92 in one fewer game. Coaches immediately identified the duo as the top playmakers on this offense, and the stats sure bear it out.

10. Of his trick-play touchdown, McMillan nodded to offensive coordinator Ryan Grubb’s creativity: “Grubb has the weirdest plays, but they’re awesome. They’re so fun to run.”

11. Wayne Taulapapa and Cameron Davis have combined to rush for 1,120 yards on 214 carries (5.2 per rush) with 22 touchdowns. Both are in the top five in the Pac-12 in rushing touchdowns. For a team that leads the nation in passing, that’s pretty decent production from your tailbacks.

13. In his fifth college season, Peyton Henry broke Washington’s career scoring record set by Jeff Jaeger from 1983-86. Henry now has scored 384 points and is finishing his career with some of his biggest kicks.