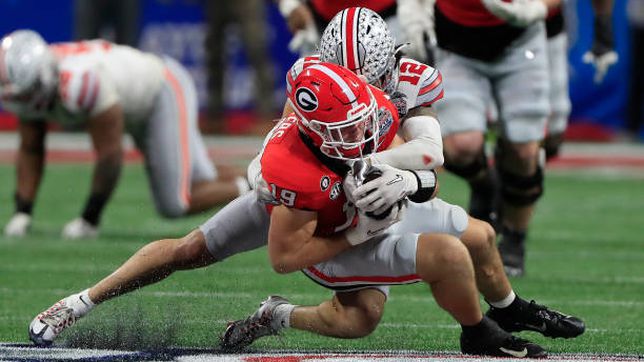 Every sport has some arcane system to pit intangibles against each other. Cricket has the insanely arcane Duckworth-Lewis-Stern method, boxing has the pound-for-pound rankings, and college football has the College Football Playoffs. All of these systems are basically flawed in that they are taking into account statistical difficulties and trying to mathematically account for them to create a hypothetical hierarchy.

Believe it or not, the CFP in college football is a vast improvement on what came before, and although not ideal by any measure, gets much nearer to declaring a true champion than at any point thus far in history.

Prior to 1936, national champions were simply declared, and it was rarely without controversy. Often several schools would content that they should be the champion, with one school simply being anointed.

In 1936, the Associated Press began to poll their writers to decide the consensus champion, leading to nearly a century of champions being decided in this manner. Later coaches polls and the rise of the USA Today poll in the late 1980s further complicated matters, leading the public to demand a playoff system be introduced.

The first, furtive steps in this direction came in 1998 with the introduction of the Bowl Championship System, which tried to find a marriage, however unholy, between the traditional bowl system and a playoff bracket. Largely ineffective, the BCS was eventually replaced by the current College Football Playoffs in 2014, where the top four ranked teams have a playoff for the National Championship.

In the early years of college football, from 1869 through to 1939, the dominant school was Yale, with 18 national championships. Here is the list of the top winners from that era:

Since the AP poll was introduced, and all the way through to 1997, the top dog was the Alabama Crimson Tide with 13 wins. Here is a list of the top winners in the AP poll era:

From 1998 to 2013, the BCS saw Alabama come out on top as well with three wins in three appearances. Here are the winners of the BCS era:

Since the creation of the CFP in 2014, the top team has been the Crimson Tide once again, with three wins over the eight years since its inception. Here is a list of the winners:

All told, there is little doubt that the dominant school in college football history has been Alabama, who have a grand total of 35 national championships across all eras. Love them or hate them, it seems that few have been able to stop the roll of the Crimson Tide.