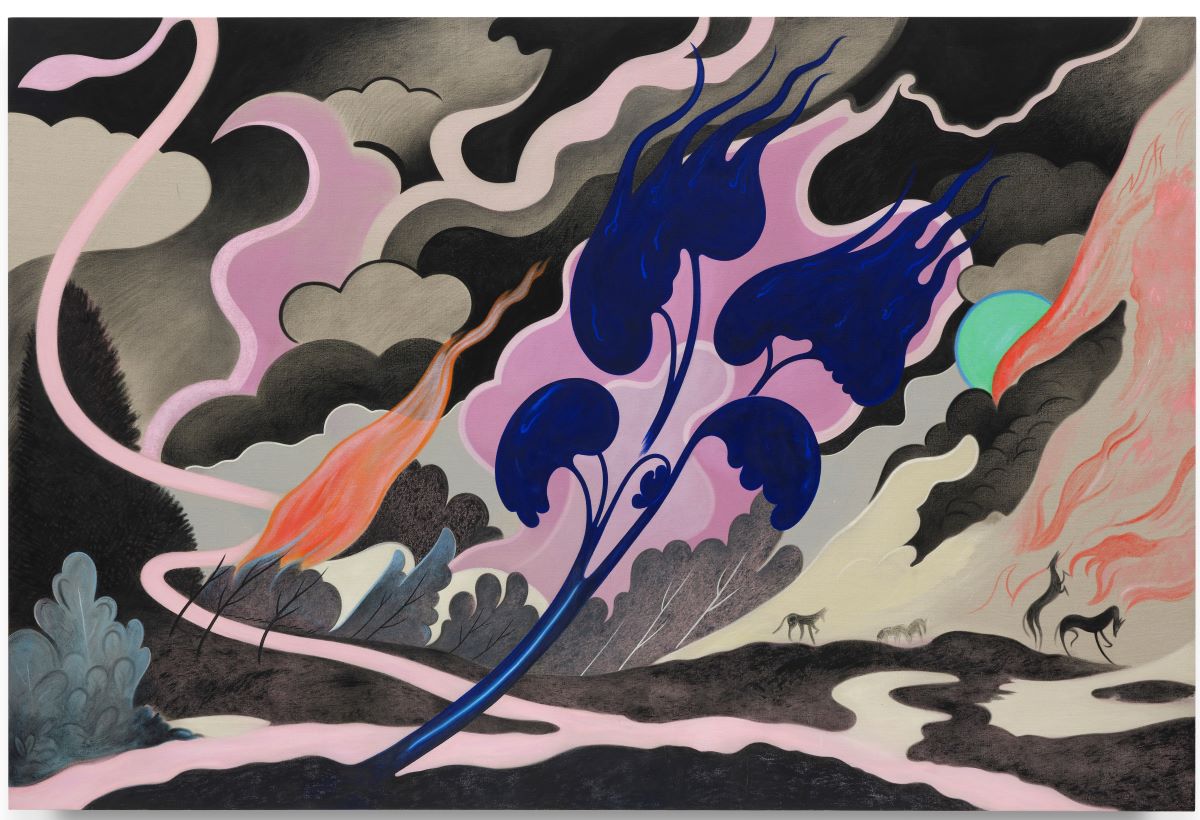 Although San Francisco may not be the commercial art center of the world, despite what East Coast media reports, our arts community is alive and thriving. Ess Eff’s art ecosystem and recent art history have been defined by an experimental, roots-up scenario influenced by its unique position on the Pacific Rim (with a 37% Asian population), easy access to nature and parklands, and historically liberal and countercultural identity, with a strong history of art activism, home to some of the most beloved and impactful alternative art spaces (The Lab, Southern Exposure, and 500 Capp Street, for example.) A city without a biennale, San Francisco celebrates the visual arts mid-January in what is informally referred to by the community at large as “San Francisco Art Week” with significant arts programming throughout the city, anchored by the international FOG Art+Design Art Fair, established in 2014. Here are some major highlights from this art-filled week in the Bay Area.

FOG overlooks the Bay and the Golden Gate Bridge, poised like a picture-perfect postcard at Fort Mason Center for the Arts & Culture, a 13-acre waterfront complex of renovated military buildings which houses multiple art nonprofits such as the Mexican Museum and the Long Now Foundation (founded in 1996 by the counterculture visionary Stewart Brand of the Whole Earth Catalog). In partnership with the San Francisco Museum of Modern Art (SFMOMA), FOG’s beneficiary, the Preview Gala supports the museum’s exhibitions and education programs, while FOG Forum, a series of public programs, specifically raises funds for its Architecture and Design Department and board members are on the host committee. The fair brings together an international roster of more than 48 leading contemporary design and art galleries.

More Than What My Hands Can Hold

Gallery 16 celebrates 30 years with artist Griff Williams at the helm. How this gallery and print shop (urban digital color) has made it through the ups and downs of the San Francisco market and tech booms is a testament to the city’s strong community of artists and to Williams’s belief in supporting their agency and work. The anniversary group exhibition More Than My Hands Can Hold focuses on artists who deal with our fraught entanglement with the natural world in quiet, personal, contemplative ways. It includes work by a local favorite, the late Rex Ray (1956–2015), whose paintings often referenced botanical forms as symbols of lives blooming in the face of adversity. Kim Bennett, Adriane Colburn, Ala Ebtekar, and Lena Gustafson are among the other artists in the show.

Let’s not forget that the real center of the San Francisco art world is in Oakland, where artists live and work. Pt. 2 Gallery — run by the charismatic Brock Brake, who opened his gallery in 2015 at the age of 25 and in his words “provides a safe space for emerging artists” — is expanding into a second gallery space this winter. Pt. 2 is also the rare emerging gallery to be featured at FOG. Working in a restaurant during the COVID-19 pandemic inspired Kellen Chasuk’s painterly visions of food and fantasy (all works from 2022). A large and lush slice of pink cake takes up a full canvas with a form recalling iconic candy-colored images by Northern California’s Wayne Thiebaud, but becomes darker when we read the title “Cake: (funeral cake).” In “Ticket Stab” they depict a bloody oyster-shucked-skewered hand, and in “Made It to the Toilet,” a head vomits an elegant slice of abstraction and color. “Thumbsucker 2” furthers Chasuk’s exploration of abjection and vulnerability with a giant face engaged in the primal act of comfort — mouths and fingers being a recurring obsession in Chasuk’s world.

Beth Van Hoesen: Punks and Sisters and Koak: Letter to Myself (when the world is on fire)

Claudia Altman Siegel, who represents such San Francisco zeitgeisty artists as Lynn Hershman Leeson, Chris Johanson, and Trevor Paglen, adds historic artist Beth Van Hoesen (1926–2010) to her roster in collaboration with the Rainbow Honor Walk and the artist’s estate. Van Hoesen, a keen observer of detail, was known in printmaking circles for her meticulously drawn realist works on paper of animals, botanicals, and portraits, and her fabled drawing circle that included her husband Mark Adams, Theophilus Brown, Wayne Thiebaud, plus other San Francisco notables. Joan Brown (1938–1990), who shared Van Hoesen’s love of drawing domestic animals and whose current survey show at SFMOMA is a must-see, would occasionally sit in. Punks and Sisters focuses on Van Hoesen’s portraits of punks from the late 1980s and early ’90s, and a series of portraits commemorating the Sisters of Perpetual Indulgence, an order of queer and trans nuns known for their activism, community service, and ministry. Also on view is the second solo show, this time featuring new dramatic large-scale paintings, of San Francisco-based artist Koak, who follows in the tradition of illustration and comics, and boasts a curvaceous, bodacious signature line.

Crown Point Press celebrated 60 years in the fall with 1962–2022: A Celebration: 60 Prints for 60 Years. Over six decades, the press has been located in four cities in the San Francisco Bay Area: Berkeley, Richmond, Oakland, and San Francisco, and has published prints by 116 artists, including notables like Mary Heilmann, Ed Ruscha, and Richard Diebenkorn. New prints are on view during FOG, made in residency by Nigerian-born artist Odili Donald Odita. “Bliss” (2022), a set of three-color aquatints with soft ground etching, highlights the artist’s experimentation with color and abstraction. Odita notes on his color choice, “The colors refer to literary and aesthetic suggestions of Black bodies and people of color (the colors purple, cerulean blue, and deep vermillion red).”

Kija Lucas at The Guardhouse

Commissioned by the FOR-SITE Foundation, which has been committed to art and the environment since 2003 and located at Fort Mason, San Francisco Bay Area artist Kija Lucas has created a magical mini museum of natural history in the former guardhouse, built in 1926, that responds to the biodiversity of the surrounding parklands. Lucas lines the guardhouse with wallpaper vinyl entitled “Misplaced” that features photographs of such invasive non-native plants as blue gum eucalyptus, English ivy, and nasturtium. Overlaid on the wallpaper are framed photographs of California native specimens and tools used to propagate them, such as the image “SAVE 4 2023,” a sticky note affixed to a seed collection envelope, and a sprig of federally protected, endangered San Franciscan manzanita.

In this first solo exhibition of New York City-based artist Nina Molloy, curated by Aleesa  Pitchamarn Alexander, co-director of the new Asian American Art Initiative at the Cantor Arts Center at Stanford University, the artist explores painting as it relates to her complex experience as a Thai American growing up in Bangkok and belonging to a particular diaspora — luk khrueng — living outside Thailand. Corrugated sheet metal, a material widely connected with poverty and displacement appears in Molloy’s paintings as an elevated precious material, sparkling like jewels. In “Nang Ta-Khia” (2022), a depiction of the eponymous water nymph from animist Thai folklore is situated unusually in the urban setting of Bangkok, indexed by a long sheet metal wall. Like Narcissus, she stares at her reflection in a pool of water. But, in the verdant lushness of Thailand’s tropical landscape, replete with a peacock, ferns, and a Tualang tree, the Western mythological and art historical trope becomes Molloy’s own reflection on the contemporary moment.

Recently, there has been a huge revival of interest in Bernice Bing (1936–1998), and the Asian Art Museum finally pays tribute to her midcentury paintings, which blur the lines between Abstract Expressionism and figuration, and her later works from the 1980s and ’90s, which blend Zen calligraphy and Asian art references, by exhibiting 24 of their recent acquisitions as part of a new initiative to collect “under-recognized modern and contemporary Asian American artists.” Born in San Francisco’s Chinatown, and known as “Bingo” by her friends, the artist spoke often of her obstacles in the art world as stemming from her tri-part outsider status of “woman, Asian, lesbian.” Thanks to “Team Bingo” (self-described), a determined cohort of mostly Asian-American women artists, we now have a significant archive that solidifies Bingo’s place in the expanded canon.

Two thought leaders of African-American women-centered movements, co-curators Tahirah Rasheed and Autumn Breon, explore how the representation of leisure and adornment, generally overlooked in the representation of Black women in art, can in fact be a mechanism of freedom and abolitionism, dismantling oppression on a personal level. Resting Our Eyes highlights a selection of works by multigenerational Black artists such as San Francisco artists Sadie Barnette and Lava Thomas, and luminaries Simone Leigh, Lorna Simpson, Mickalene Thomas, and Carrie Mae Weems, among others.