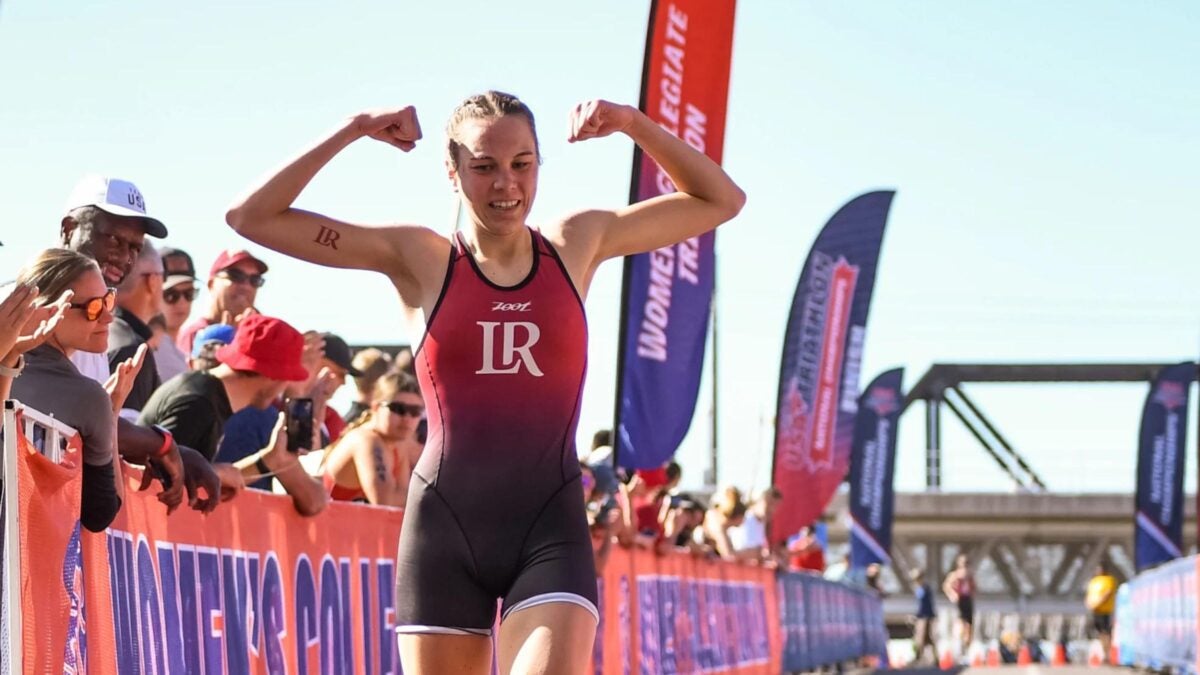 Is there a place for testing the body composition of college-aged triathletes? Chelsea Burns, former assistant coach at the University of San Francisco and former pro triathlete, doesn’t think so—and she’s not alone.

“For a 20-year-old trying to have a great collegiate career, I just think it kind of dooms them,” Burns says. “If your full-time job is elite sport and you’re looking for the most marginal gains to win an Olympic medal, there’s a place for every little last thing. But those measurements at the college age are destructive.”

Burns was a cross-country and track athlete at Colgate University until 2012, then pursued triathlon after graduation. By 2018, she was ninth in the World Triathlon Series Olympic rankings and a pro with the U.S. National Team for seven years. She became an assistant coach at the University of San Francisco, which is one of a dozen D1 programs as triathlon transitions into an NCAA championship sport. In other words, she’s seen how body image and eating disorders can run rampant among female endurance athletes—and how using body composition testing can, for some people, escalate such problems.

“I think in triathlon the athletes are a little protected because strength is required considerably more than in running,” Burns says. “But you know, you show up at races and everyone’s sizing each other up—there are always those comments of ‘so-and-so looks fit’ and everyone knows exactly what that comment means…there’s a lot of battling with these issues in triathlon, too.”

The use of body composition testing in the NCAA has come under more public scrutiny lately. Women who compete in cross-country and track, in particular, have raised concerns that such metrics can trigger body dysmorphia, body shaming, and eating disorders. First, the Oregonian reported that female track athletes had left the program at the University of Oregon after undergoing mandatory DEXA scans, which are medical imaging tests that measure bone density and body fat percentage. The New York Times recently spoke with 20 female Power 5 conference athletes who described similar body composition tests as “invasive, inconsequential to their performance, and triggering for those who had eating disorders or were predisposed to them.” Runner’s World then reported that the University of Colorado is investigating complaints by former female cross-country athletes about body fat testing, among other cultural issues within the program.

The data derived from such tests is supposed to help coaches, dietitians, and trainers optimize their athletes’ nutrition, training, and recovery. But athletes have pointed out the various ways they can actually have harmful effects, especially when the numbers are presented without appropriate guidance, education, context, and sensitivity—or when coaches encourage them to arbitrarily lower body-fat percentages to enhance performance. All of that can lead to various health risks like relative energy deficiency in sport (RED-S), which occurs when energy intake and expenditure are misaligned. The long-term consequences include osteoporosis, chronic injuries, and amenorrhea, among other health concerns.

How NCAA Triathlon is breaking the paradigm

Many of the top NCAA triathlon coaches agree that the risks associated with body composition testing among young female athletes aren’t worth it, including Cliff English, who has been at the helm of the Arizona State University women’s triathlon team since 2015, leading the program to six national championship titles. The university has the resources to conduct testing with team members, but English’s philosophy on how to approach fueling and diet has shifted in recent years, saying that focusing on an athlete’s weight is often just lazy coaching—an “archaic” practice that neglects other aspects of performance, like training load, recovery strategies, and basic nutrition. He no longer believes body fat measurements are useful for college-aged triathletes.

“It’s a different time now, in a different age, and I think we do need to break that paradigm,” he says. “If you’re training well, you’re consistent, you’re healthy and not injured, [body composition] is going to take care of itself.”

Arizona State triathletes meet with the sports dietitian when the season begins in August to talk about diet and fueling. Especially for first-year team members, who are often away from home for the first time, it’s important to learn when to eat throughout the day to keep up with the demands of training and academics. English and the coaching staff also maintain open communication so that when problems arise, like when athletes have struggled with eating disorders, a supportive relationship has already been established and they are more likely to ask for help.

“My goal is to help them on this path to reaching their potential, it’s not to have someone leave and never want to do this sport again. If that happens, you didn’t do your job as a college coach,” he says. “A lot of it is really simple education, empathy, compassion, and understanding.”

It’s risky business when you’re trying to be a mechanic on this high-performance vehicle and you’ve never really been under the hood of a Lamborghini before.

The role of body composition testing in triathlon

Dr. Paula Quatromoni, associate professor of nutrition and epidemiology at Boston University and an expert on sports nutrition and eating disorders, says that in the rare cases that body composition tests are warranted for athletes, they should be used as a medical intervention, to better understand why somebody might be suffering repeated stress injuries or is not menstruating, for example.

“That is a case-by-case individual situation and I don’t really believe it should be in the hands of a coach,” Dr. Quatromoni says. “It requires an interdisciplinary team, including health professionals who understand the physiology, and understand the nutrition components, and understand the endocrine components, what’s happening with the person’s metabolism. A coach is not trained to manage that.”

Sports like triathlon have also fallen into the traps of diet culture, with some athletes trying fads like intermittent fasting, obsessing about “clean” eating, or cutting carbohydrates. Adding body fat metrics to the recipe is dangerous, Dr. Quatromoni says.

“All this nutrition misinformation is perpetuated because people truly believe it gives them the competitive edge,” she says. “The mindset of athletes is disciplined and committed—you tell me to drop weight, I’ll drop weight. You tell me not to eat carbs, I won’t eat carbs. They are so willing to follow advice, even when it’s not evidence-based.”

RELATED: The Fight Against Pseudoscience, Bad Training Advice, and Bullsh*t

Hannah Loftus became head coach at Delaware State University in 2022 and hasn’t done any body composition testing with her athletes. In fact, she’s opposed to it.

“I don’t think you ever have to teach a female collegiate athlete to worry about her body composition,” Loftus says. “As you learn about your team members, as they open up and share, you find out that a really alarming majority of female athletes in high school have suffered from some kind of disordered eating, stress fractures, and everything that goes with that.”

When Loftus took over the coaching position, she decided to make improving nutrition a primary goal for her team, meeting individually with the women to go over what they eat during the day, how they were fueling their training, and educating them on how to prevent bonking on the bike or during their runs.

“One hundred percent of the time in these conversations I was realizing the problem is under-fueling and not taking in enough nutrition,” she says. “These athletes want to have a certain type of body composition, to the point that sometimes they would rather err on the side of not eating enough versus too much. So we’re focused on how to use food to make them stronger, instead of what you should or shouldn’t eat.”

RELATED: Your “Good” Diet Could Be Ruining Your Life

Back at the University of San Francisco, head coach Gina Kehr, who raced professionally from 1998 until 2009, agrees with her peers—that body fat testing isn’t as meaningful as supportive dialogue that addresses the overall health and wellbeing of her athletes. The early season is a good time to open those lines of communication.

“When we’re just sitting there having coffee during one of our first coffee rides of the season, we just talk generally about how they see their nutrition, what they could do better, and how they feel in recovery,” Kehr says. “It becomes an open topic and we have the resources, like a nutritionist, to help if they need it.”

That’s exactly what Dr. Quatromoni hopes more NCAA coaches do—seek out expertise when it comes to diet and nutrition, especially when athletes have specific needs, challenges, or questions.

“It’s risky business when you’re trying to be a mechanic on this high-performance vehicle and you’ve never really been under the hood of a Lamborghini before,” she says. “We run into problems when the process is just so widespread and so poorly implemented without the right experts having access to the data. It’s like putting a tool in the hands of someone who really doesn’t know what to do with it.”

RELATED: Don’t Fall For the Myth of The “Ideal” Triathlon Body